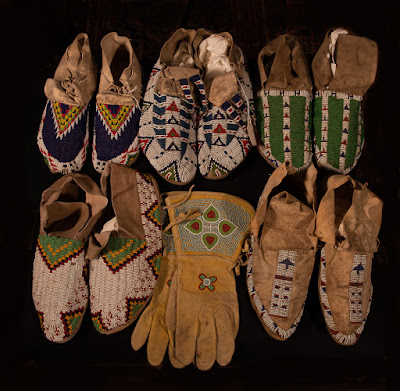 So the Virtual Tribal show opened for early buyers at nine in the morning yesterday, the Indian Show an hour later.

I had a new sharpie and a new spiral notebook and I was ready to start writing tickets until my hands fell off.

I have been feeling a little big for my britches of late and yesterday was a real punch to my overly inflated ego. Thanks, I needed that.

I had spent so much and worked so hard for two months for this show and had expected a monetary payoff but I am in a business where you don't always get one.

I glanced at my fellow dealers booths and didn't see much if any action there either but I didn't look that closely.

So I decided to back off. Go about my business, get some work done while I am waiting near the phone, try to go back to what passes for me as a normal workday.

Four more days left in the show, maybe something will fire? Whatever comes down the pike, made the decision to back off and not be a nervous wreck, doesn't help anyone.

Had a good nights sleep. Fed the cats, fed the birds, took a breath. I stopped over at Main Street and had a good breakfast.

So today I am once again not hearing the phone ring and just starting to think bad thoughts about my merchandise when I get a couple calls from friends; they can't even access the site. Yesterday or today. Virtual wheels just spin.

Apparently it isn't me, there is in fact a server issue, the show pulled more people in the first hour than they thought conceivable in their wildest projection. So rather than me being on hind tit, it is all of us consuming the same effluent sandwich.

Word is they are trying to switch the thing over to an industrial server, going to extend it at least another day. Who knows, maybe the thing will indeed fire? If I hear that it is smooth sailing I will pass the word. Those that have an interest will hopefully be able to check it out, one day soon.

I think that things are ironing out. To get into the shows try here and here.

Wow, bad luck, but maybe good news in the end

You can't run it on your old iMac in the basement and expect it to work.