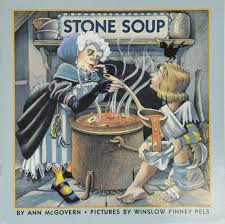 We were talking about going hungry and hard times this morning at coffee. I never went hungry more than a couple times in my life.

We were poor and ate an overabundance of mush for a spell when I was a kid but always had at least something to eat as far as I can recall.

Later when I was hitchhiking around the country during my post summer of love drop out wanderlust phase I went hungry a couple times but they were few and not really worth mentioning.

I was a little astounded when my friend Jay started telling us about being stone broke and eating rock soup in the late fifties or early sixties when he lived and breathed hot rods and every dollar he could find went into his dragster.

I may have this a little bit wrong but he would put a big rock in a boiling pot of water and then work from there. Add spices and eat it for supper.

Tonight I looked up Rock soup and it appears to be a folk tale and morality play that wends its way through many European cultures including Russia, Germany and Hungary.

The Stone Soup is a European folk story in which hungry strangers convince the people of a town to each share a small amount of their food in order to make a meal that everyone enjoys, and exists as a moral regarding the value of sharing. In varying traditions, the stone has been replaced with other common inedible objects, and therefore the fable is also known as axe soup, button soup, nail soup, and wood soup.

Some travelers come to a village, carrying nothing more than an empty cooking pot. Upon their arrival, the villagers are unwilling to share any of their food stores with the very hungry travelers. Then the travelers go to a stream and fill the pot with water, drop a large stone in it, and place it over a fire. One of the villagers becomes curious and asks what they are doing. The travelers answer that they are making "stone soup", which tastes wonderful and which they would be delighted to share with the villager, although it still needs a little bit of garnish, which they are missing, to improve the flavor.

The villager, who anticipates enjoying a share of the soup, does not mind parting with a few carrots, so these are added to the soup. Another villager walks by, inquiring about the pot, and the travelers again mention their stone soup which has not yet reached its full potential. The villager hands them a little bit of seasoning. More and more villagers walk by, each adding another ingredient. Finally, the stone (being inedible) is removed from the pot, and a delicious and nourishing pot of soup is enjoyed by travelers and villagers alike. Although the travelers have thus tricked the villagers into sharing their food with them, they have successfully transformed it into a tasty meal which they share with the donors.

The funny thing is, I believe that Jay was being straight up. I really think he did make a soup based around a rock, this was no morality play. Unless he had us going but I don't really think so.

After we talked about his pebbly repast I asked the guys if they knew where the dish cioppino comes from?  Not Italy but San Francisco actually. The fishermen on the dock would chip in whatever was left over at the end of the work day so that their unfortunate comrades could eat if they had a bad day.

Cioppino was developed in the late 1800s by Italian immigrants who fished off Meiggs Wharf and lived in the North Beach neighborhood of San Francisco, many from the port city of Genoa. When a fisherman came back empty handed, they would walk around with a pot to the other fishermen asking them to chip in whatever they could. What ever ended up in the pot became their Cioppino. The fishermen that chipped in expected the same treatment if they came back empty handed in the future. It later became a staple as Italian restaurants proliferated in San Francisco.

The earliest known recipe was published in 1901 in the San Francisco Call. The word itself is not a linguistic contraction/variation of "chip in" as I had been led to believe but is actually taken from a classic soup from Liguria, Cioppin.

Mush and Kraft dinner. I still love them both