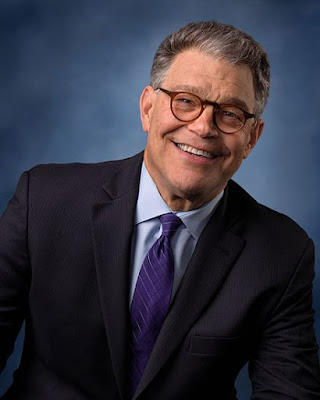 Al Franken, one of the smartest, funniest and most pro active Senators in our country, was forced to resign for allegedly trying to kiss a talk show host and once touch another woman's clothed buttocks.

He was summarily drummed out of the Senate by members of both parties including Schumer, McConnell and Gillibrand, before he could even plead his own case.

Now we have congress people like Marjorie Taylor Greene openly calling for the assassination of elected officials in the Democratic party and nobody says a peep, in fact she gets a plum committee assignment.

We have over fifteen elected representatives breaching the capitol in a failed insurrection and few will say a peep.

Lauren Boebert can taunt a survivor of a school shooting and call him a pussy and that is evidently okay but Al Franken gets his walking papers for a little grabass, like he is the first Senator or politician to have ever gotten frisky.

I'm not excusing his behavior but I really liked the guy and think the country could use him right now. He never should have resigned.

The US political system is on the way to turning me into a Buddhist recluse at best and at least a Dollar Store Shaman.

I agree! By the way, I thought Jon Harwood was already a Buddhist recluse! I have not seen him at the Dollar Store!

It seems he was hoist with his own petard.

And to think M.Taylor Green received a standing ovation from her spineless peers... leaves me speechless!