I had a hard run

Running from your window

I was all night running, running, running
I wonder if you care?
I had a run-in
Run around and run down
Run around a corner
Run smack into a tree
I had to move
Really had to move
That's why if you please
I am on my bended knees
Bertha don't you come around here anymore
Bertha - Robert Hunter
© Ice Nine Publishing Co., Inc., Ice Nine Publishing Co. Inc.
It was a tough run, these last three weeks on the road. Can't think of a more difficult stretch of shows. My one decent day was followed by a forty five dollar day, when things are going this way it is a real emotional roller coaster. I will have to re apprise the possibility of going back to New Mexico next year, or at least doing these three shows back to back.
One of the problems I was having was physical. My asthma was kicking up. Add to that the mask requirement and the high elevation and I was plainly fighting for oxygen, at least the first week or ten days in the Land of Enchantment. Sinus's felt bad, skin felt bad, everything felt bad.
Do you ever wake up from a heavy sleep with fragmented, disjointed thoughts that make absolutely no sense at all?  That was what my brain was like the first three or four days in Albuquerque. I was freespooling. It felt like a bad acid trip.
I am smart enough to mostly cover up this sort of thing but when you don't feel altogether right it shows and it certainly didn't fool those old native women.
* 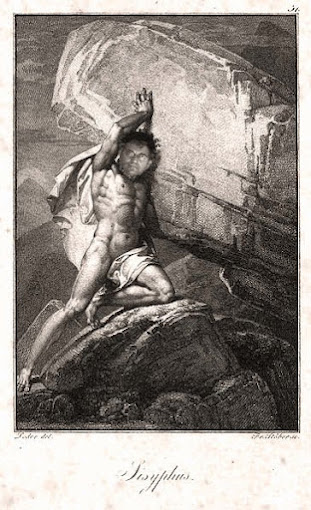 Three weeks, as I said, is a long time on the road. At this point, having just arrived tired from traveling home for two days, I don't believe that events were interesting enough to give you a full blow by blow. I will do a quick mental scan and see if I can land on anything interesting.
I took very few pictures with my camera. It didn't come out of the bag for over a week. Never felt it. Went out to the Randall Davey Audubon Preserve with Warmboe one day and snapped a couple birds but it was cloudy and nothing special.
We took a hike up the adjacent preserve and I felt better afterwards. A hike often straightens me out. I will talk about food at another time, had a couple decent meals but nothing exceptional. Mostly hung out with old friends, which is always good.
I drove back on one of my favorite stretches of Route 66 last night, Seligman to Kingman. Almost took a picture of a golden eagle, it was too far away. Almost stopped and shot some horses but thought better of it. I almost took a picture of the junk yard in Kingman this morning, the early light looked lovely reflecting off the huge mountains of twisted metal. Almost took pictures of the funky flea market I shopped at six o'clock this morning but it was a tad too pathetic. You get the idea, the camera stayed in the bag and I never found my gait or my second wind.
You can't win them all as much as you would like to.
*
I saw something cool and a bit strange in the middle of the Mojave desert today, miles from any water source, an osprey on a pole. I called birder pal Beth, she looked it up, that is where they go for summer migration. Neat. 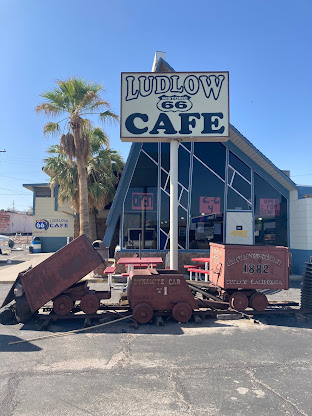 Had breakfast at the Ludlow Cafe this morning, a first for me.
Decent, considering. 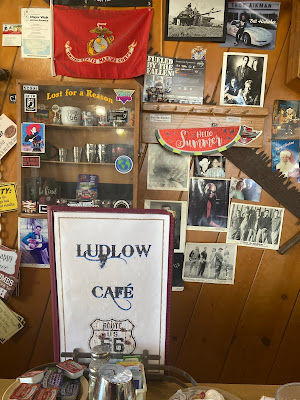 Today is mom’s birthday. Thinking of all of you