Marching towards the cliff 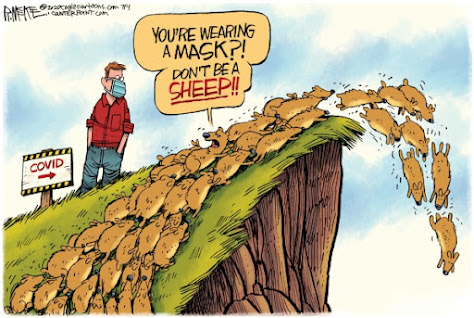 It saddens me to read about pediatric covid cases soaring in places like Texas and Florida while their governments fight sensible mask and vaccine mandates in schools.
Irrational and seemingly suicidal.
And my mind keeps going back to the excellent book written by the late historian Barbara Tuchman, The March of Folly.

Tuchman shows many examples in history where faced with a myriad of safe choices, governments and rulers will find the one narrow route that is sure to ultimately do them in. 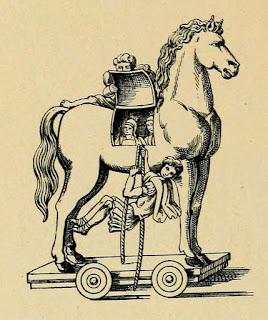 The book is about "one of the most compelling paradoxes of history: the pursuit by governments of policies contrary to their own interests."It details four major instances of government folly in human history: the Trojans' decision to move the Greek horse into their city, the failure of the Renaissance popes to address the factors that would lead to the Protestant Reformation in the early sixteenth century, England's policies relating to American colonies under King George III, and the United States' mishandling of the conflict in Vietnam.

When political considerations trump rational behavior and result in the death of the citizenry and children, I think it is time to find new leadership.

Mask and vaccine mandates because you care about the children? Get the fuck out of here and leave the children out of your mess.

I want to edit last sentence to read "and replace leadership in States like Texas and Florida". Here in PNW, State and local officials are relying on Science and have implemented sensible mandates. I completely support and trust their decisions and I comply for the greater good. I don't want vaxx...but me got poked. I don't want mask... but me wears it. Meanwhile, we have our share of FreedumbCowboys and Q-Nuts who are fuxking it up for the rest of us and want to replace the competent leaders because 'Merica.

Add the 20 year mis-handling of the U.S. folly in Afghanistan.

Anonymous who is a coward is rude

I'm trying to be kind to those who refuse vaccination and masks. After all, you should have some sympathy for the dying.

. . . but it's hard because they are taking others down with them.