Notes from the field 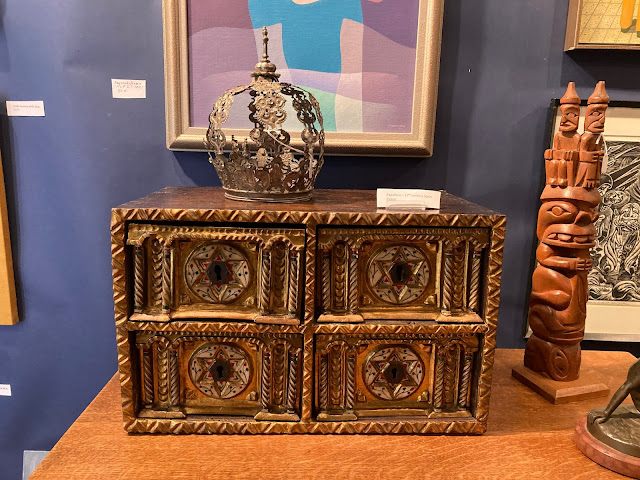 Things could certainly change but this trek to the southwest has not been your scribe's finest hour, at least from a financial standpoint. I am starting to sweat a little bit.
Two days left and I don't think I will be able to pull it out at this point. We will see.

I have been in this position plenty of times before and have been saved but I am not counting on it and it is getting harder for me to keep my game face on. Not feeling sorry for myself, just stressing, please excuse me.

It is beautiful here in New Mexico right now, perfect cool weather, short afternoon rainstorms and I am happy to be in the marketplace with my comrades after a two year break.

But none of my three shows have really fired and I have largely failed to connect with the marketplace in a meaningful way.  With huge expenses and the cost of goods I am afraid this whole near month on the road is setting me back financially at a time when I needed to move forward.

I could come up with a million excuses for my troubles, some of them probably valid. Crowds are down due to covid, people and dealers are scared to come out. The Delta variant continues to wreak havoc. There are about 30 to 40% less dealers here, but that is every show I have attended in the last couple months. The pandemic caused an enormous attrition and has shaken the antiques and decorative arts business and a lot of people aren't ever coming back.

I think the bigger problem is my material. I am what you might call a Swiss army knife dealer. I like to say that my knowledge base is a mile wide and a quarter inch deep. I sell items that span the decorative arts, from classical to modern, soup to nuts, all year long.

My peers and competitors are specialists that might do a couple shows a year. They tend to be much more attuned to the fine points of their market than I am and they frankly know the material better than I do.

I have done Indian shows in Marin and Santa Fe for close to thirty years and in some strange way am still an outsider if not a rookie. The business is built on relationships and I have not forged enough of them with this material. Pots, baskets, paintings and expensive big ticket items were not moving, jewelry was and I didn't have enough of it.

The noted chemist and engineer Owsley was an acquaintance of mine many years ago. On more than one occasion he remarked that my problem was that I was always trying to play pinochle at a poker game. So I got to Albuquerque and tried to play poker at a poker game, a novel approach for me.

Verrier said my stuff was too good for the venue, not sure if that was true. In any case I went back to playing pinochle at the poker game at the Objects show in Santa Fe, with a very personal mix of stuff and failed to fire there as well. Didn't resonate, couldn't seal the deal. 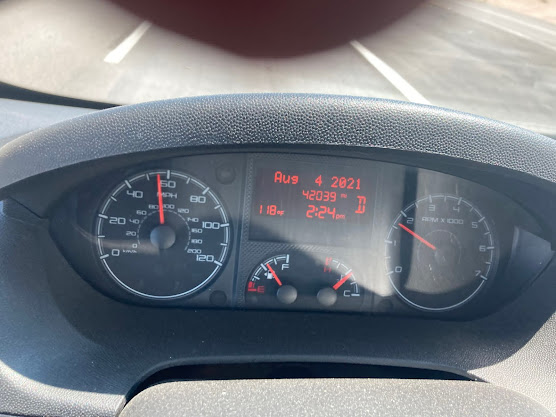 The trip started out hot and got even hotter.
Past Needles the thermostat in the car read 119 degrees at one point, by the time I took a shot with my phone it had dropped a degree lower.

New van ran really well, no issues whatsoever. I think I made the right call buying the ProMaster. Great air conditioner, in any case. 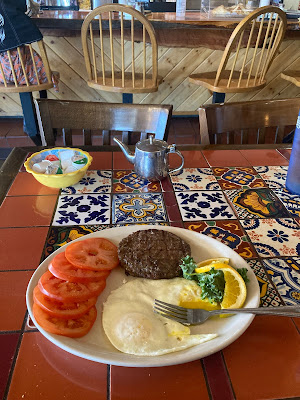 I made it to Flagstaff the first night after a requisite stop at my cafe stop in Seligman, Westside Lilo's. My favorite waitress was not there but all of them are nice and I had my customary angus patty and eggs.

Now this trip started out about three weeks ago or more, so forgive me if I am a little foggy on the initial stages.

I remember having to stop at a gas station for a little personal relief and in a grossed out pique thinking that there should be a special hell reserved especially for the people who purposefully leave a steamer in a public bathroom without flushing them. What the hell is the matter with you?

I got to New Mexico the second day of travel, after the normal stupid traffic slowdowns near Grants that will probably continue for another hundred years. 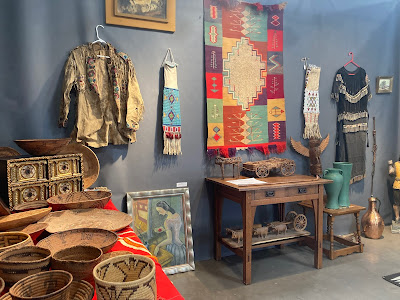 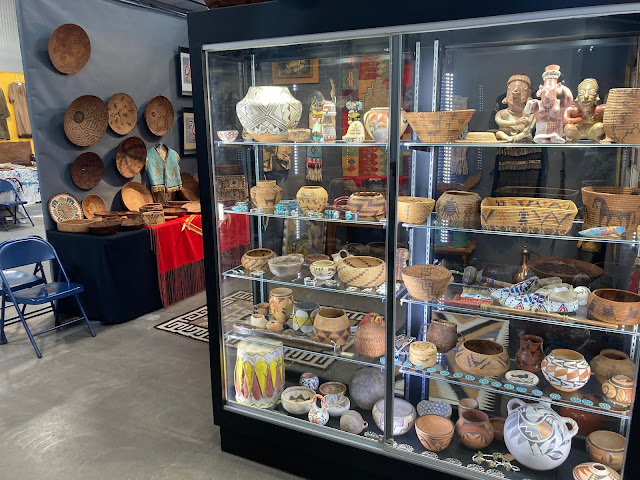 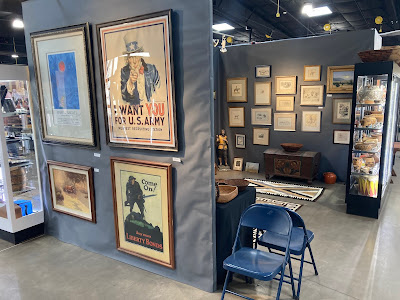 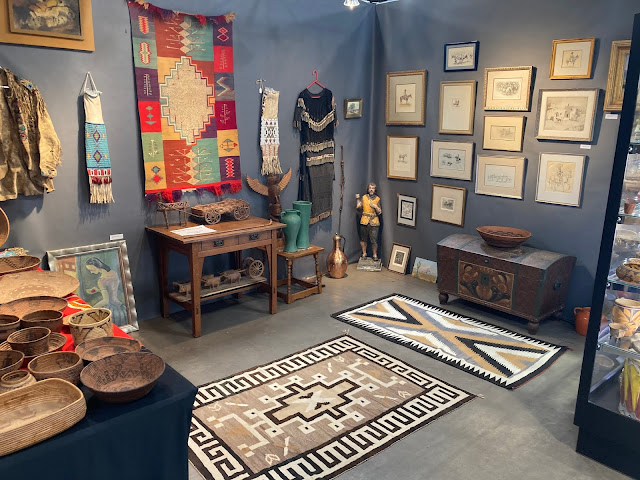 Albuquerque show setup is a blur now but some of the colorful characters floating around made the experience memorable even if it was not particularly remunerative. I snapped a couple shots with my cell phone. People in New Mexico are not very constrained in a fashion sense, for good or ill. 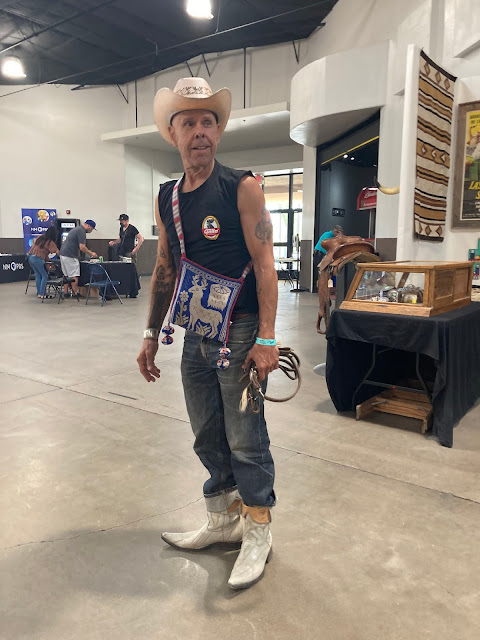 I have two recollections from the show to share with you that I think are worth mentioning. I had a signed Chagall poster that a man was interested in.It was rather expensive and I gave him a break that he accepted after a quick phone call.
He called his ex wife. It was a very quick conversation. "Do you still like Chagall?" Click.
I guess the man, a devout sort of fellow who worked for a Focus on the Family offshoot in Colorado Springs, had recently divorced his wife of twenty nine years. He had initiated the split. The divorce has just finalized and he evidently realizes that he has made a mistake.
The purchase was a peace offering to win her back. It wouldn't fit in his convertible so he was driving the whole way back with the top down. I hope to god he didn't hit weather. I believe in happy endings and asked him to keep me posted on how it all turns out. Wonder if she hit him over the head with it?
The other bizarre encounter I would like to share was when two older Pueblo native women came into my booth. They quizzed me on the origin of some pueblo pottery material, turned out they were sisters from Isleta.
They actually found pottery in another booth that one of them had made with her grandmother when she was a child, some seventy five years prior I would estimate. But they came back to my booth and decided to lay a trip on my head, saying that they could not buy from me on account of a mysterious force field that they said existed around my face.
I tried to stay as gracious and amenable as possible but was too tired to really appreciate the spiritual diagnosis and head shrinking and thought it was in poor taste to have it delivered unsolicited, reikian force field extant or not.
Did think it a little strange when she started moving her hands around my face and certainly took stock in the odd vibes she maintained I was putting out. You see a thousand people a day at a show and you are performing in a way and it is not always easy to put on a perfect face. Not everybody is going to always dig you. But who knows, maybe they are on to something?
Albuquerque ended and I drove up the 25 to the next stop, Santa Fe. I checked into the older Lamplighter motel, the Gujrati owners were wonderful. Place was nice and clean would be perfect for my four day pit stop. 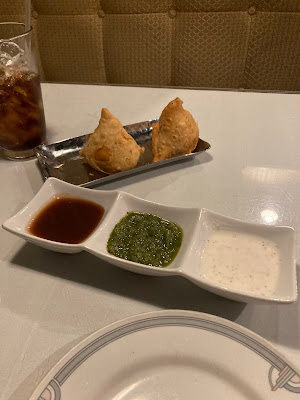 Went next door to the Indian restaurant and had a great goat curry. actually ate a lot of goat this trip, one of my favorite meats. Good vegetable samosas at India Palace too but everything was a bit pricey.
My off day is a bit of a fog. Lunch at La Choza with Barry for the weakest posole I have ever eaten.
Barry is a good friend, a great dealer and comedy writer but honestly his record regarding food over the years has not been so stellar. 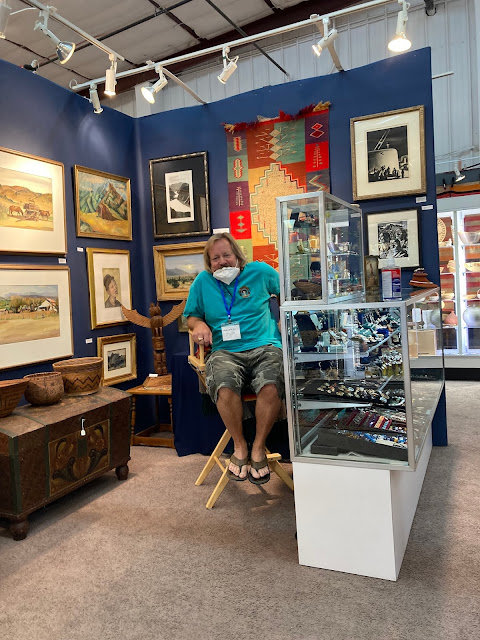 We set up for the Objects show on Tuesday.
My buddy Bill from Burlingame sharing the booth with a showcase displaying his jewelry.  We had a nice time but the show was not our finest hour financially. 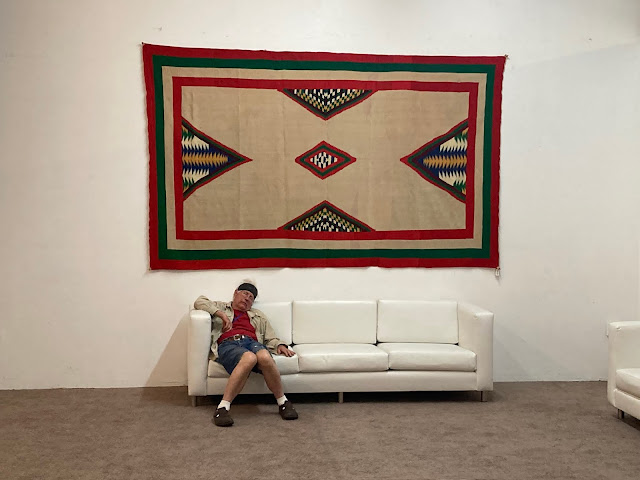 At one point in the show a girl wandered in, with the aid of a walker. She had distinctive lightning bolt earrings and lightning bolts on her shirt. I like to banter with people light heartedly and told her that I sensed a definite theme here. 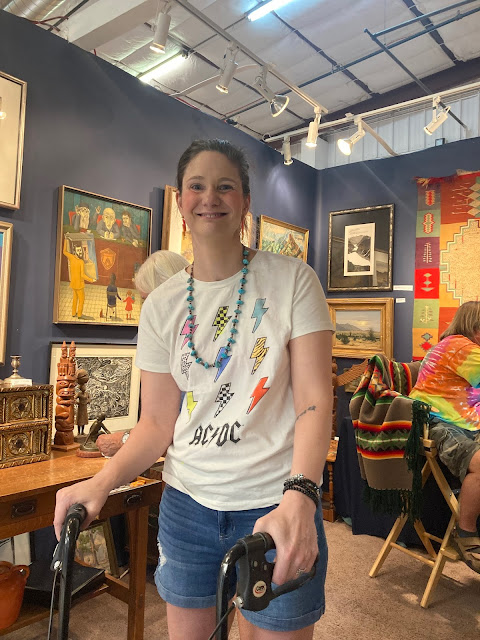 I was shocked when she started to speak. As it turned out, she had a remarkable story. Her name is Tess and she spoke with a pronounced stutter and an unfortunate cognitive impairment.
Eleven years ago she was an archaeologist and was out on a dig in a monsoon. She was struck by lightning and it had obviously both defined her continuing existence but had also given her a personal totem🗲 now handling life as best as she can.
People are really quite amazing. Just when you think that you have seen it all...
to be continued...
Posted by Blue Heron at 7:10 AM

I am particularly fond of talking about things I don't understand, so here goes. I think that on occasion some Native American folks are amused by the gullibility of us gringos when it comes to spiritual stuff. Sometimes we get our legs pulled. I can't tell from this distance and I would have had to be there to catch the subtler communication but laying a trip on you unsolicited like that seems a bit off to me.

I have wondered for a long time about that force field you exude!!