Somehow I came down with a stomach virus, probably the nonavirus. I was running  a 101 degree temperature yesterday, I felt a little better today, still not back on solid food. There is never an opportune time to be ill, my shop is still three or four days away from being navigable and a hell of a long way from being organized.

I have been trying to put three hours a day in minimum, even feeling crappy and managed to put half the boxes away this morning before I hit the wall. Paid some large necessary bills that were gnawing on me. Trying to keep my distance from people, maybe still contagious.

So my brain is a bit scattered and I am going to still let it rip, with a stream of consciousness Monday blast, disjointed, unproven and full of non sequiturs. About all I am capable of in the present state.

I listen to the Beatles channel on Sirius quite a bit but can't tolerate Mondays. Why? Because it is all McCartney and my body can't tolerate that much syrup. Lennon, George, the fabs, no problem. But Paul overload is like being trapped in a wayward disney ride, way too much glycemic index. It's a small world after all...

Andor must have really seeped into my consciousness. I had a dream the other night and was a valley over from Ferrix, now a town. I had to watch Rogue One again, it was no better than the first time I saw it but you can see what Gilroy has done when he had full creative control. Brilliant.

If you want to see another fun whodunit movie, try the Outfit on Prime. Randle recommended it and he was spot on.

Many of my appliances are revolting or having their last gasps of air. I had to buy a new router today, hope I can hook it up without having a breakdown.  Nostril trimmer kaput.Television is also on the fritz, a 15 year old Bravia. They don't make too many televisions in 32" anymore, we have a small space, but looks like we need a new tv. Prices have certainly dropped, not sure what we will do. 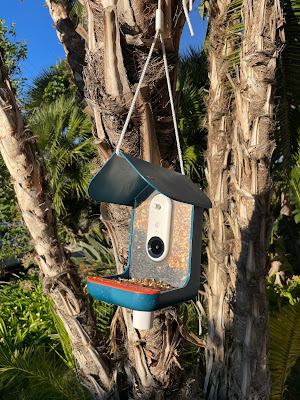 My Bird Buddy smart bird feeder came in. Have not quite dialed it in yet but it did send me a picture of a scaly breasted munia perched on it this morning.

I just ordered the optional solar roof, now making it officially the most expensive bird feeder in the world.

Took two years for delivery, damn birds better like it. Not real happy with the software at present, bit counter intuitive, but it is supposed to identify birds at the feeder and deliver pics in real time.

I had some comments taken down on Next Door last night where I recounted some of the bigotry I have witnessed and experienced in the Friendly Village over the last forty years. A man was bemoaning the loss of the friendly village of Fallbrook. I mentioned a few anti semitic incidents that I had endured in my life here, talked about Metzger, about the poor innocent black kid murdered a few years ago by the street gang, mentioned that our past was not perfect. Lo and behold, my comments were scrubbed off the site this morning. Go figure?

Guess it was a bit too much for the censors. I screenshot it, just in case. Always perfect here in Pleasantville. 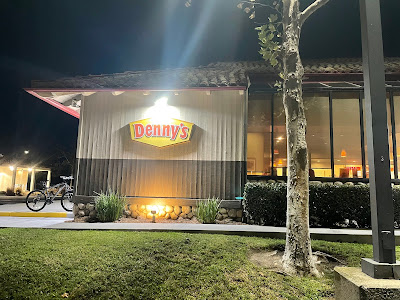 We had great plans for my birthday before I left. It has been twenty years since I was home on my birthday. Leslie promised stroganoff. But she got really sick and I ended up at Dennys, fairly miserable. 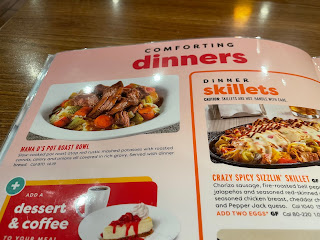 Their pot roast was not quite as good as I remembered it but the server said it was a real favorite. Quite forgettable. 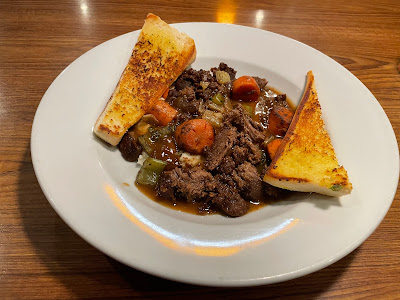 Disgusting actually. But I ate it, stewing happily in my intense misery, enjoying a dinner that I probably wouldn't feed a dog.
Leslie cooked me a real stroganoff birthday dinner when I came home.
The agony and the ecstasy.
*
I never had the opportunity to be a parent, not sure what kind of Dad I would have become. I have my father and grandfather's worst attribute, an anger that flashes white hot on occasion.
But who knows what kind of father I would have made?  I like to think a good one, who knows?
One thing I have noticed is that some of my peers aren't doing such a good job. Many of my friends never had kids, some had wonderful kids, responsible and able to support themselves. Unfortunately many are near worthless, unable to navigate the slightest trauma, still at home in their twenties and thirties.
My theory is that they are overprotected. I was on my own by the age of fifteen and knew that there was no safety net or anyone to catch me when I fell. If we live without the possibility of a hard fall off the precipice I believe we do not receive the tempering needed to get tough and survive.
I know boomer and hippie parents now that are having such a tough time with their worthless kids. Not only are they dysfunctional and incapable of supporting themselves, many have, horrors, become very conservative. They listen to Rogan and all this right wing crap and then blame their parents for not giving them the skills they needed to adapt. They smoke pot all day and then complain about the liberals. Nature of rebellion I suppose.
One friend of mine's sister actually sued her parents because they never told her that she would have to get a job one day and support herself.
Completely worthless. Maybe it's a good thing I never became a parent. Would definitely be a tough love sort of dad.
*
Tres Cheesy. A woman in Florida is suing Kraft because her velveeta wasn't prepared in three and a half minutes. First we shoot the attorneys...
*
I haven't tweeted in over a year but deleted my account yesterday anyway because I can't stand the company and don't want to share a universe with the barbarians.
*
QAnon back on Twitter.
Posted by Blue Heron at 2:36 PM