This day in American history 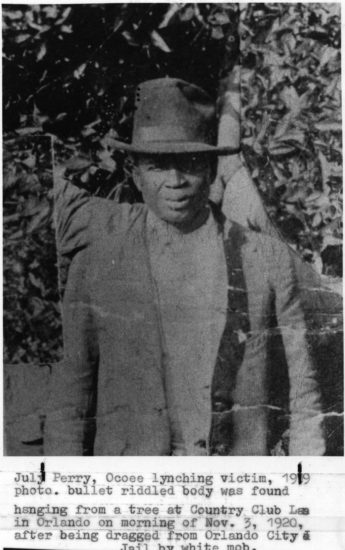 On this day in 1920, white mobs rampaged through the Florida citrus town of Ocoee, killing as many as sixty black people and setting fire to black owned homes and businesses.

This occurred after a black farmer, Mose Norman, showed up at the polls to vote on Election Day.

Ocoee is a town located near Orlando that was populated after the Civil War by confederate soldiers.

In November 1920, Mose Norman, a prosperous African American farmer, tried to vote but was turned away twice on Election Day. Norman was among those working on the voter drive. A white mob surrounded the home of Julius "July" Perry, where Norman was thought to have taken refuge. After Perry drove away the white mob with gunshots, killing two men and wounding one who tried to break into his house, the mob called for reinforcements from Orlando and Orange County. The mob laid waste to the African American community in northern Ocoee and eventually killed Perry. They took his body to Orlando and hanged him from a lightpost to intimidate other black people. Norman escaped, never to be found. Hundreds of other African Americans fled the town, leaving behind their homes and possessions.

More on the massacre here.

On November 1st, the day before the election, with robes and crosses, the Klan paraded through the streets of the two Black communities in Ocoee late into the night. With megaphones they warned that “not a single Negro will be permitted to vote” and if any of them dared to do so there would be dire consequences.

Election Day came and at least some Blacks did attempt to vote in Orange County; however, none were permitted to enter their respective polling places. White enforcers camped out around the centers and poll workers were given instructions to deflect their attempts.

One-by-one would-be Black voters were turned away either by threats of violence or by poll workers who found their names “mysteriously” absent from the voter registration rolls. Pollsters instructed them to get documentation from notary public R. C. Bigelow to verify that they were indeed registered to vote. Conveniently, however, Bigelow was unable to be located because he was out on a fishing trip that day.

Treasure and exercise your right to vote. Others have died for it.

Also on this day in 1861, President Abraham Lincoln relieved General Fremont from command for daring to emancipate slaves in Missouri.

What concerns me is the apparent reality that low gas prices are more important than maintaining democracy. High gas prices are in your face all the time and have an obvious relationship to reality. Democracy is something they used to teach about in school. It is abstract and not obviously connected to daily living.

We'll see how it goes.

I do believe that the younger generations are understanding the power they hold in their hands with the vote. It is our responsibility to encourage them and others to get out and vote. Knowing history helps.