How would you like to work for this guy? 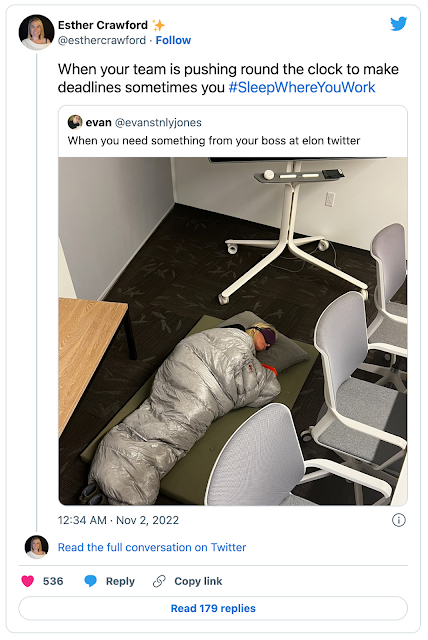 A Twitter employee shared a picture of his boss in a sleeping bag and mask on the office floor, illustrating Elon Musk's new hardcore work culture
Elon Musk is up to his old tricks, working the employees like dogs. There were similar stories at Tesla a few years back.
Tesla factory workers reveal pain, injury and stress: 'Everything feels like the future but us'

..some of the human workers who share the factory with their robotic counterparts complain of grueling pressure – which they attribute to Musk’s aggressive production goals – and sometimes life-changing injuries.

Ambulances have been called more than 100 times since 2014 for workers experiencing fainting spells, dizziness, seizures, abnormal breathing and chest pains, according to incident reports obtained by the Guardian. Hundreds more were called for injuries and other medical issues.

“I’ve seen people pass out, hit the floor like a pancake and smash their face open,” said Jonathan Galescu, a production technician at Tesla. “They just send us to work around him while he’s still lying on the floor.”

At least these people aren't working in the Shanghai Tesla factory...

It was hard enough for me to live with a bi-polar parent, don't think I would want to work for a bi-polar boss. Good luck, Twitter.