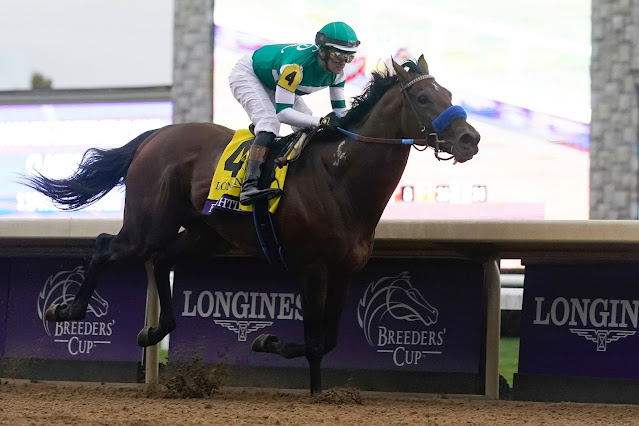 I enjoyed watching Flightline win the Breeder's Cup Classic. Life is Good set a blistering pace but the bay colt had no problem reeling him in and winning by over eight lengths.

According to Equibase, before he finished fifth, Life Is Good laid down early fractions as impressive as Flightline's final time. His opening quarter of :22.55, half-mile in :45.47, and six furlongs in 1:09.62 were the fastest among 51 races at 10 furlongs run at Keeneland since 1991.

Now, after only six undefeated races, Flightline is being retired to stud. Reportedly, with him now worth an expected 100 million dollars in stud fees, no insurer would touch him if he continued racing.

So how does he rank against the greats of old? Unfortunately we will never know. He just did not have enough races. But let's look at the numbers:

As great a performance as Flightline showed in the Pacific Classic, it pales in comparison to Secretariat's Belmont 2:24 second mile and a half win where he beat the field by 31 lengths. Big Red set records in the Belmont and Preakness that still stand fifty years later.

Secretariat lost a few races but he finished with 16 wins, 3 place and 1 show in his career. He finished out of the money one time. In 21 races, the big colt set two world records, three track records and one American record.

Man O'War had an identical 21 starts and finished with twenty wins and one place. He had a bad start in the only race he did not win (he started with his back to the gate) and he lost by a nose.
And this was with huge weights being put on his back, up to 138 lbs., giving up to 30 lbs. up to his equine opponents. He ultimately set seven speed records during his career.
Flightline has not set a single speed record and his Classic win was a second slower than the record.
All three of these horses are obviously marvelous wonders. I think that two things separate them from each other.
The first is stride length. Man O' War had the longest stride length ever recorded, 28'. Secretariat's stride was a much shorter 25.5'. Flightline's longest recorded stride length was a nearly identical 25.56' in the Pacific. Horses with long strides accelerate slower but are able to eat up ground once they get moving.
So what makes Secretariat the greatest horse that has ever lived, in my opinion? His heart.
Both physiologically and metaphorically, Big Red sported the biggest horse heart anybody has ever seen. After his death Dr. Thomas Swerczek performed the necropsy.

“We were all shocked,” Swerczek said. “I've seen and done thousands of autopsies on horses, and nothing I'd ever seen compared to it. The heart of the average horse weighs about nine pounds. This was almost twice the average size, and a third larger than any equine heart I'd ever seen. And it wasn't pathologically enlarged. All the chambers and the valves were normal. It was just larger. I think it told us why he was able to do what he did.”

There you have it. A large heart, working optimally, can produce much more power.

...Secretariat had an unusually large heart – estimated at 22 pounds, while the average Thoroughbred heart is 8.5 pounds. This tremendous cardiovascular system, pumping oxygen into his lungs at an abnormally high rate, was clearly a source of his stamina and power.

And that is why he was the fastest horse that ever lived.

Doctor Fager won at 7 furlongs
under 136 pounds in 1:20 .
Flight line really beat a small mediocre field in.pedestrian time.
Secretariat you said records to never even be approached.
One million $ is simply ridiculous
showing how racing is now the "Art
Market horses will be soon
be $old at Southbeys!