Honestly, it was a tough couple weeks hotel wise. Maybe I am just losing it, I don't know. I stayed at a friend's house the first night in Burlingame. The next night I went to check into my hotel, the Hilton.

Oops. That's right, I had booked the Vagabond Inn for the in between night. I checked the address and gave them a call.

"Mr. Sommers your stay is scheduled for next week."

I didn't? I did. I had made it for the 16th, smack dab in the middle of Santa Barbara. I asked them if they could change it or give me a refund? Nothing doing, pay the late cancellation fee. So stupid, and entirely my fault. I gritted my teeth and paid the exorbitant rate.

Went back to the Hilton the next night for the rest of my stay, it was great.

Fast forward to the next week. I am staying at the Black Oak in Paso Robles when I had the strange impulse to check my upcoming room in Carpenteria for the next four nights. This is at about 1:06 in the morning. I fumbled around and turned the light on near the bed.

I looked at the reservation on my phone. I couldn't have. I did. I had not made a reservation for Carpenteria, I had somehow accidentally made a reservation in Camarillo, about an hour and change away from the show. The price rankings don't worry about distance and I had screwed up mightily and booked the wrong town. I had dire visions of sleeping in my van for a week. What an idiot I am. Santa Barbara is the toughest town in California to get a reasonable room. It is way out of my budget. 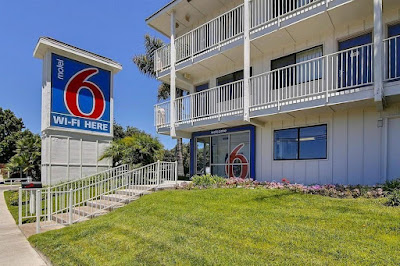 I was up for an hour with a nice lady in Manila sorting things through, luckily the Motel 6 North in Carp still had a room available.

Since the Sandman changed hands and raised their rates, the Motel 6 is my go to in the area. Still can cost you $135 and up but what else is there? Nothing. Tried the Super 8 once in Goleta and it was an absolute zoo. Never again.

I loaded my stuff in and drove the twenty five minutes or so down the coast to the room. Getting back the next morning would take three times as long, on account of the never ending freeway construction but that is another story.

And for a entirely different story, in the old days as a kid, Santa Barbara was the only stop on the 101 in all of California, with traffic lights, called, funnily enough, the lights. I hitchhiked through there a time or two and there might be thirty people in front of you, you waited your turn. I have spent over three hours waiting for a ride there, even with my lucky half dollar in my hand.

It is dark, I am hungry and tired and I go to check in.  The girl behind the counter has purple hair, a paunch and a lot of ink. Very nice and sweet actually. I ask her for a downstairs room and she says she only has one fronting the freeway. I don't care, give me the room, 108.

I get the key and open the door and a foul smell hits me like a ton of bricks. Not only that, the bed is unmade, everything is piled up and I wonder if there is a dead body in the room? Seriously. I go back to the office and tell the girl that something is strange and maybe there is someone else in the room and I follow her back, in case she needs backup. She closes the door, checks it out, wordlessly comes back and gets me a room two doors down.

This room is okay, loud but okay. I actually like Motel 6 because you know what you are going to get and not get. No kleenex, shampoo, paper thin towels, but the floor is better than carpet and all I really need is a bed and commode. I'm pretty low maintenance.

You look around the parking lot and see a lot of work trucks, the only place for the landscapers and electricians and plumbers that make Santa Barbara run can stay but like me, they can't afford a three hundred dollar room. These guys tend to be hispanic and the barbecues get a lot of usage.

I actually like their shower setup, with the reverse head that shoots away from the door. Ingenious. The only problem with mine is that there were a couple small cockroaches living in mine. But that is cool, after a half hearted try at washing them down the drain, we forged an agreement to live and let live and to stay out of each other's way.

So it was not a terrible stay, no worse than the South facility anyway. a friend tried to stay at mine and checked out in five minutes on account of a dead rat that stunk to high heaven. I like to think that I am made out of sterner stuff. Will probably be staying there for the next ten years or more, I know the drill. Anyway somebody told him that the owner doesn't put a penny into the joint. Who knows, out of my pay grade?

They asked me for a review today on Hotels.com. I was as honest as I could be, don't want to piss these people off, not like I have options. Here's my shpiel:

Beats the hell out of sleeping in my van.

Ever consider a small rv, capable of storage for art and a bed and bathroom ?
I have fond memories of hitchhiking to Big Sur and always getting stranded in Santa Barbara. Ah the good old days.

Your motel saga reminds me of car trips with my folks. My Dad had a policy of renting the cheapest room in any given town. I remember a motel in Gallup, New Mexico where the old wall heater sounded like a 747 taking off - turned on and off all night on its own like it was possessed. And people wonder why I have a nervous tics. -Debbie

We started going to the Gallup Ceremonial in about 1963 or 4 in the plymouth fury station wagon. I don't remember the rooms in Gallup but I remember the ones in Gila Bend, which were quite funky. Gallup was dirt streets, drunks laying around and hundreds of people hopping the freight trains, which went for ever and posed an interminable wait. Loved the event in any case.

We would have been the people in the 1964 silver blue Thunderbird. Small world 😁. I knew I had seen you in a previous life. -Debbie