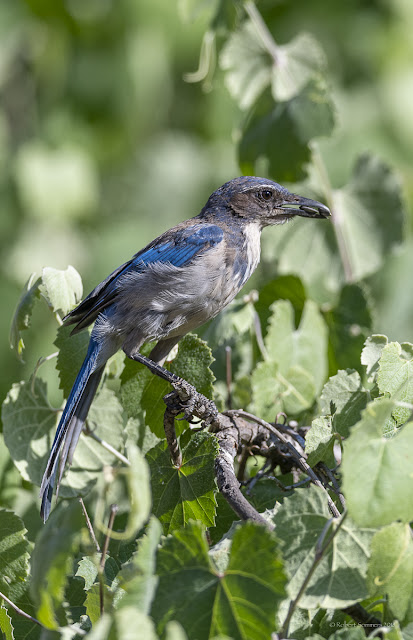 Facts of life. The summer is always a bad time for my business but this one feels even worse than usual.

Each one of my regular antique shows in California, Del Mar, Santa Barbara and San Mateo, has recently gone from three a year to two a year. Palm Springs was always two. Many of us have been existing from show to show and it is getting harder for everybody.

Los Angeles and the Bustamante shows are now gone completely. Dealers are dropping like flies, for a variety of reasons that I don't think I need to rehash again.

And unless there is a major sea change I foresee things getting even worse. Going to try to hang on as long as I can. Of course some of my cohorts are doing just swimmingly and they never fail to let me know. Good on them!

I have done pretty well at the shows I have exhibited at but there just aren't enough of them. I get next to no walk in anymore at the shop, which I try to open every Saturday.

Not a lot of interested people under the age of sixty or seventy, let's just say that. Ikea seems to suffice perfectly in the new world we live in.

My motto the past couple years is that "survival is the new victory." But the prospects for that victory seem somewhat debatable at present. Couple that with the Trumpian civil war going on outside and it adds up to one big kettle of existential angst for yours truly. 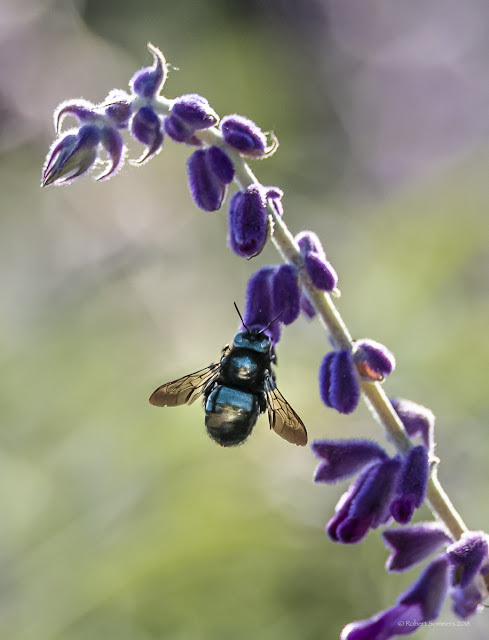 Not talking to many people, even close friends. Don't want to be a bummer, have to find my own way out. I consolidated two storage units down to one this week. Staying busy, trying to push every available button.

Getting pretty hot out there in Southern California. And to decompress from all the tsoris I sit in my yard, accompanied by my ever compliant shadow and watch the birds. And the occasional bug. 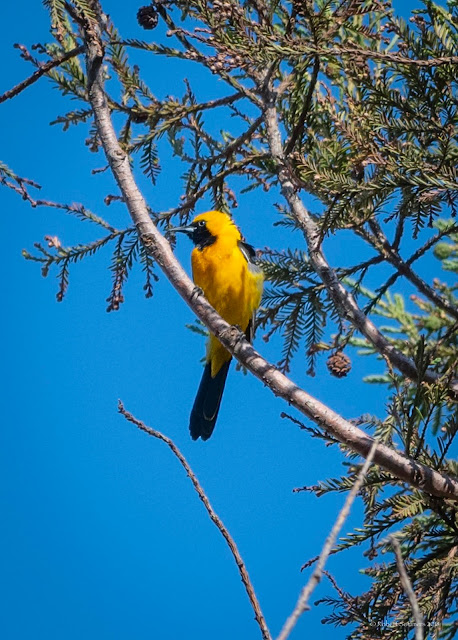 Yesterday I set the tripod up and went to the nikkor prime. The normal crew of chazers visited the feeders. 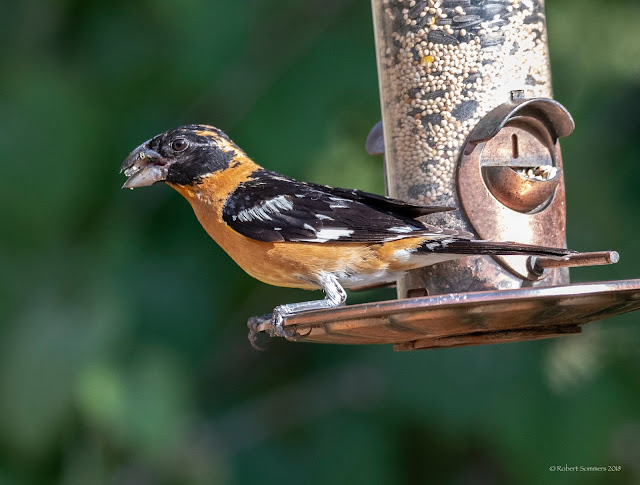 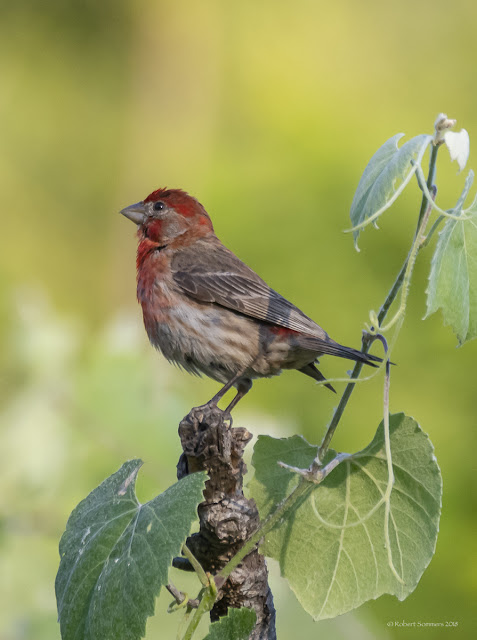 The house finches, such a boring and pedestrian name for such beautiful creatures, a grosbeak, the scrub jays, phoebes and more.

A hooded oriole was far overhead on a bough of the remaining redwood. The orioles are around most of the time but they are cagey.

They don't eat feeder mix and they are betas in the alpha bird universe that I inhabit. Keep themselves pretty scarce. Fleeting shadows. 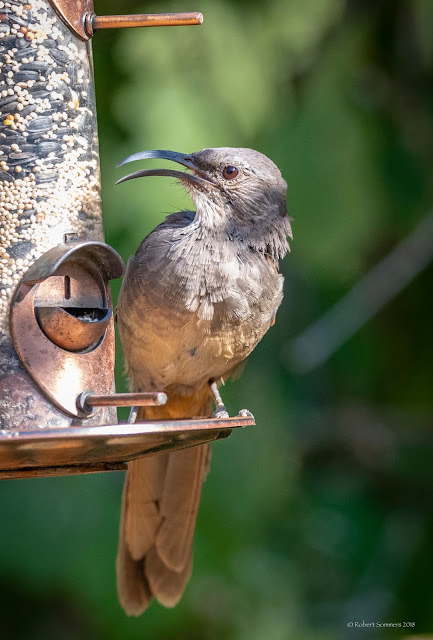 Yesterday I had a California Thrasher at the feeder. First for me but Leslie says that she sees them there.

I love their long curved beaks.

I photographed and watched for a couple hours. Snapped a few hummingbirds. 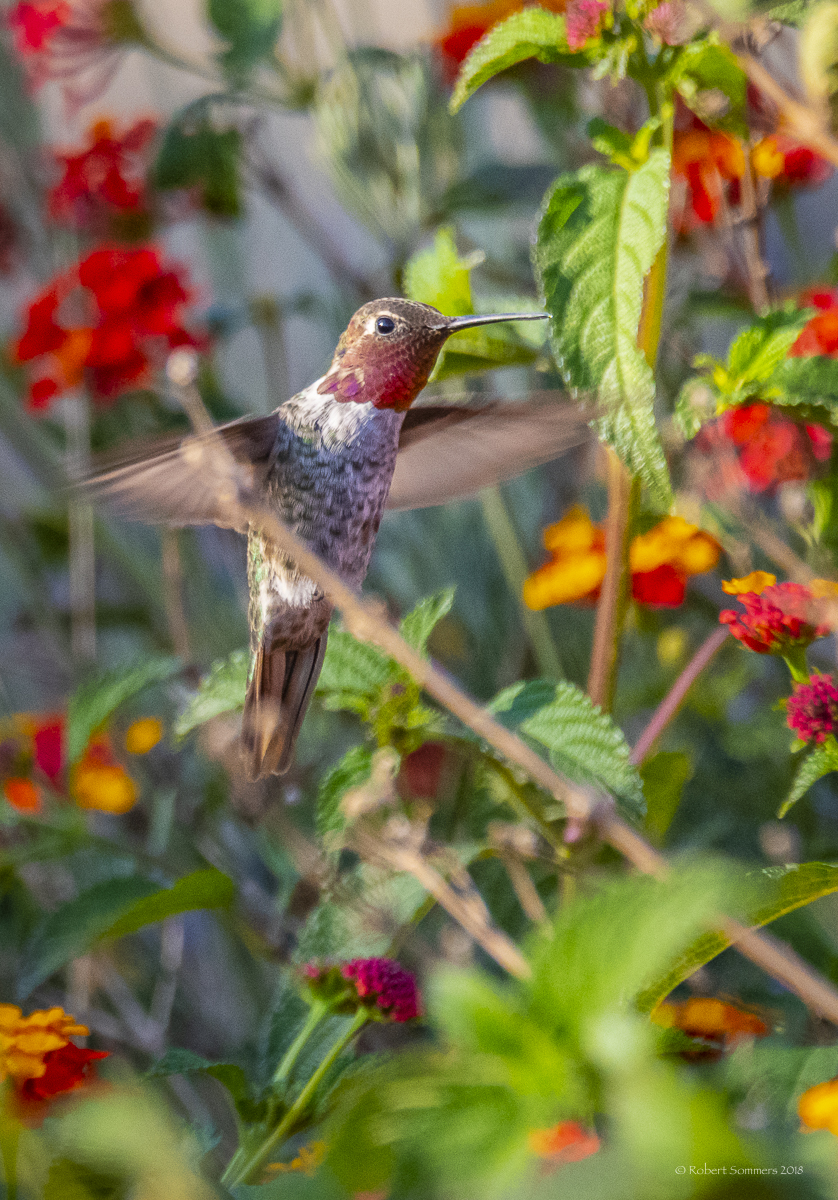 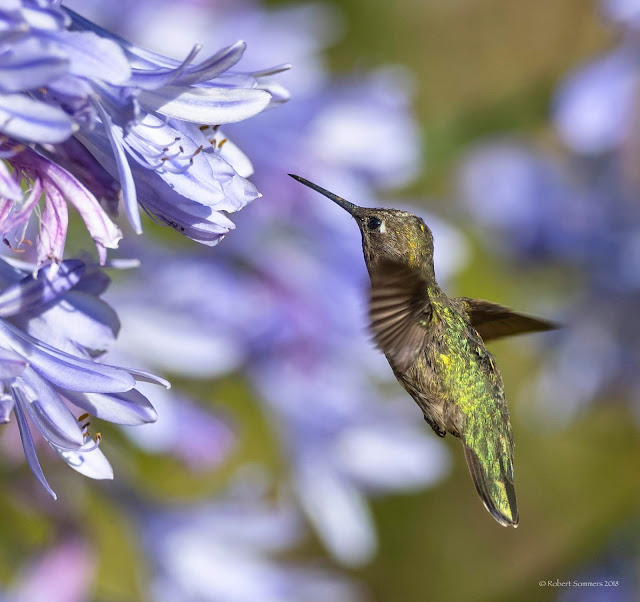 I am thinking about getting religion at least temporarily, to get me through July. Or is that not the way it works?

I was sitting in my chair, pondering fate when I decided to put the camera away and go in for the evening.

I stuck the lens back in the case and broke down the tripod and just decided to listen to the soothing music of the birds for a few minutes. 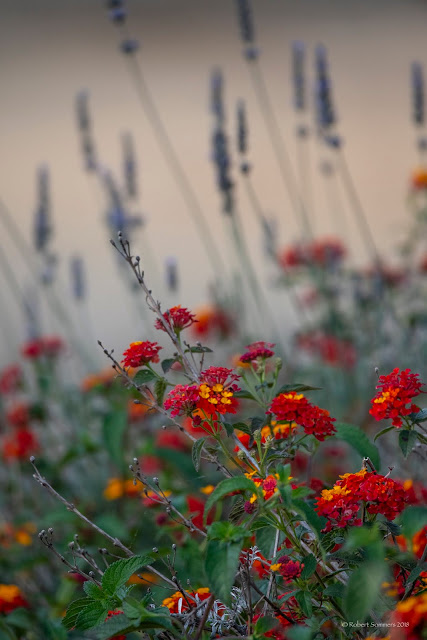 More beautiful than any symphony the way they talk to each other, that is if you stop to listen.

It was at that moment when providence shown down on this poor soul.

A northern flicker landed on the wire not ten feet from my head and displayed the most magnificent orange plumage for me. Then gone in an instant! Like a visitation from a saint.

I was shocked. I have never seen a flicker in the yard in thirty years, I would have been no more surprised if a phoenix had landed.

I hurriedly grabbed my rig in hopes that it would return but it did not. I think it was a one time shot. Somehow it made me feel better about everything. Hoorah!

I know that the birds bore the shit out of many of you but for me, they sure beat antidepressants. 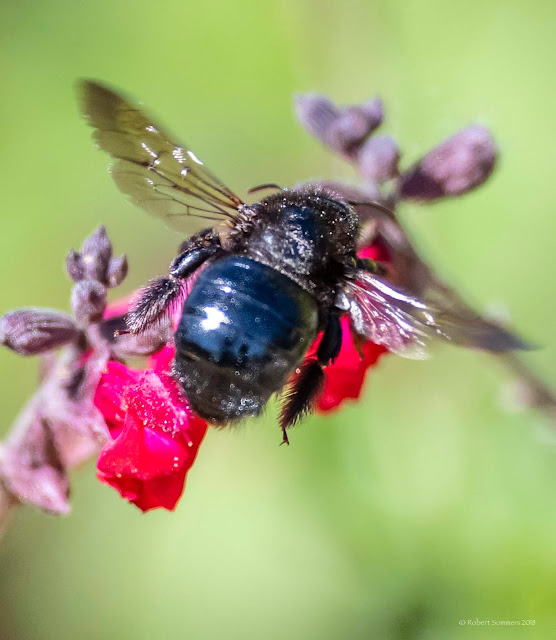 Maybe if art promoters charged a little less fee for exhibitor booth spaces, lowered the steep entrance price to art collectors attending shows, and maybe spent a little more money on advertising shows might get better. ( I know, they have to pay steep rent for buildings, insurance, taxes, etc. etc.)
And if art dealers themselves started to give a little bit better deals (c'mon) the business might turn around.

All said and done, this ain't gonna happen and you are back to square one.

Perhaps the perception of the left vs.right is creating two variations of art collectors? It seems to be effecting every business in America. Art movements and the sales of certain types of art seems to come in cycles. Some cycles happen rather frequently and others periodically. It may takes years before older styles and movements of art is vogue. Who knows what is collectable art anymore. Conservative buyers want art more as an investment. Younger collectors are more trendy. Obliviously it would be impossible having such a contrast of art styles in one show.

The birds and the bee’s don’t bore me...they give me hope.