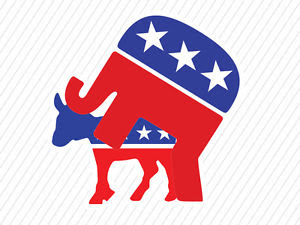 So although a majority of americans once again voted for the Democrat in the last presidential election, we now have Republicans controlling the House, Senate, Presidency and Supreme Court.

The latter institution purports to be nonpartisan and ideologically color blind but we know what a crock that is. Seven of nine SCOTUS justices appointed by Republicans, partially thanks to some nasty McConnell gamesmanship and the conservative four vote like a block.

Funny, you will often see Kagen or Breyer vote with the majority but never the other way around.

Great article by Jonathan Chait at New York today, The Republican Court and the Era of Minority Rule. Read it. Thanks to the most consequential decision of Mitch's tenure the majority of this country is now renting and tearing their garments.

Why? Because we have been gamed.


Democrats have won the national vote in six of the last seven presidential elections, which, with the retirement of Anthony Kennedy, will have resulted in the appointment of eight of the Supreme Court’s nine justices. And yet four of those justices will have been appointed by presidents who took office despite having fewer votes than their opponent. Republicans will have increasingly solid control of the court’s majority, with the chance to replace the sometimes-wavering Kennedy with a never-wavering conservative movement stalwart.
Over the last generation, the Republican Party has moved rapidly rightward, while the center of public opinion has not. It is almost impossible to find a substantive basis in public opinion for Republican government. On health care, taxes, immigration, guns, the GOP has left America behind in its race to the far right. But the Supreme Court underscores its ability to counteract the undertow of its deepening, unpopular extremism by marshaling countermajoritiarian power.

Sorry Jonathan, but you misspelled countermajoritarian. No decent editors nowadays. I have talked about the general phenomenon before, I call it the "tyranny of the sticks." The rural areas have diluted majority power and seized the reins. It was no accident. Through redistricting and blatant gerrymanders, abetted by an ideological SCOTUS, the GOP has managed to neutralize the urban metropolis and minority voting in this country and now runs the entire show. Still don't understand how a citizen in Wyoming's vote is worth so much more than mine is. Minority rules. And they reign with a big stick.

Abolish the Electoral College for once and for all. Time for a big payback. Time to stop playing so nice. They've stolen your country. Rise up.
Posted by Blue Heron at 2:13 PM

With the current developments, I find myself remembering how I dealt with 1968. Then the news came through relatively neutral relatively well curated sources. Now we have a fire hose of information blasting our heads. So as I read about the multiple outrages I ask myself how much I need to know and how much I can let pass by. This sets up a self curation that helps insulate against the emotional impact of the outrages. Next, I ask what I can actually do. Reality based actions are similar to 1968, voting, precinct walking, demonstrating, letters, phone calls and contributing money. The other crap, posting on social media and being drawn into those endless pointless fight is really a meaningless waste of energy. Blogs like this are OK, a constructive element of the new technology.

At the end of the day one has to "Keep calm and carry on". Live a normal life, get something out of it and do what can actually contribute to the resistance and lead to change. Wear asbestos underwear and a gas mask on social media.

That's a majority of voters including the People's Republic of Northern Mexico disguised
as California voted for the Democrat, but outside California the Republican candidate won the popular vote.

Think about that. The rest of America is Republican. Ha Ha Ha

Last I checked, California and New Mexico were still part of the United States. Their vote still supposedly counts. Hate to break it to you.