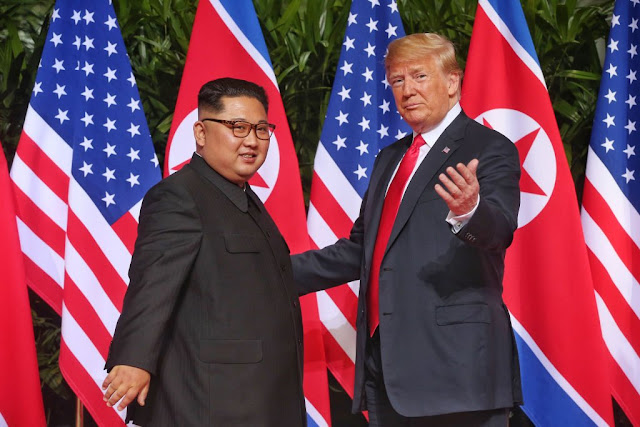 As I recently wrote, all politicians lie, regardless of party. Obama dissembled about the Iran deal, Reagan lied, they all lie. We just expect our politicians to be better liars than this one we have now and not to get caught in them quite so easily. To have some notion of truth and hopefully at least a passing respect for it.

Trump is rewriting the rules regarding lying and prevarication. He has no apparent regard for facts or truth. The President is apparently a sociopath who lies so much and so casually that he wouldn't know the truth if it bit him on the ass. Case in point is North Korea.

He said that thousands of parents of Korean War veterans begged him to get their children's remains back. They haven't. Do you know how old they would be right now? At least one hundred years old. But then he went on the other day:


“It was the last thing I asked,” he told a gathering of Nevada Republicans on Saturday. “I said, ‘Do you mind, would I be able to get the remains back of all those great heroes from so many years ago?’ And he said, ‘I will do that.’ And you probably read, they have already done 200 people. Which is so great.”

One minor problem. We haven't as yet got any remains back. Details...

“There is no longer a Nuclear Threat from North Korea,” he informed us in a June 13 tweet upon his return to Washington from Singapore. He has also repeatedly stated that North Korea has begun to denuclearize. Said, mistakenly that they had torn four sites down. But they haven't, in fact they have strengthened a key nuclear site and are rapidly upgrading. A major expansion and campaign of deception reportedly from our new pal in the axis of evil.

In his Senate appearance Wednesday, Secretary of State Mike Pompeo acknowledged that North Korea was still, in fact, a nuclear threat. In fact the Joint Agreement doesn't say that North Korea will denuclearize, it says that it will work towards denuclearizing. There is a big difference.

Such a casual respect for language and truth, the pity is how few people seem to care.

In other news, all around good guy who loves his people Kim Jong Un had a top commander executed for giving extra food to his troops.


North Korean leader Kim Jong Un reportedly ordered a high ranking army officer to be executed after he was accused of giving extra food and fuel rations to troops and their families.
Daily NK reported that Hyon Ju Song, the lieutenant general of the Korean People’s Army in the country’s capital, Pyongyang, was executed by a firing squad for “charges of abusing authority and engaging in anti-Party acts.”
Hyon was reportedly a rising star in the army before his death. He served as a member of the Workers' Party of Korea's Central Committee and battalion commander under the Supreme Guard Command.
“While checking the oil supplies for the Sohae Satellite Launching Station during the comprehensive inspections of wartime supplies on April 10, Hyon stated, ‘We no longer have to suffer and tighten our belts to make rockets or nuclear weapons.’ This was seen as an abuse of authority and a treasonous statement that opposed the Party’s military-first policy,” a source told Daily NK.

It will be real interesting to see The Trumpster at the upcoming NATO meeting. This is a group of our best friends and allies. After that meeting he will be meeting with The Putster in Helsinki. If he treats The Putster better than our NATO allies, much like he dissed the G7 folks and then seemed to embrace Un, then, I think it will be time for Congress, including the majority of Republicans to question his fitness for office.