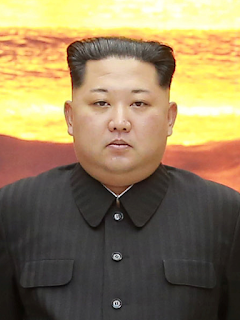 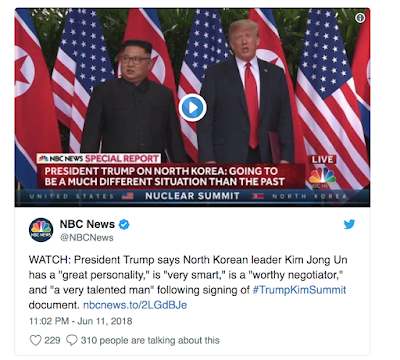 I was thinking about Kim and all the adulation and decided to look him up on Wikipedia. Wow. What a hoot he really is.

In office for the last six years, Kim is estimated to have murdered over 400 of his countrymen. There are said to now be between 80,000 and 120,000 political prisoners currently in hard labor prison camps, they often have to catch and eat rats to survive. The UN estimates that 60 thousand children are now on the brink of starvation.

Kim Jong un once killed a deputy minister for appearing to nod off in a meeting. With an anti aircraft gun. That will keep the rest of the guys up.

Then he murdered an uncle. Not content with just offing him with the anti aircraft gun, he finished the job with a flamethrower. Nice! But overkill? Hello!


In December 2013, Kim Jong-un's uncle Jang Song-thaek was arrested and executed for treachery. Jang is believed to have been executed by firing squad. Yonhap has stated that, according to multiple unnamed sources, Kim Jong-un has also put to death members of Jang's family, to completely destroy all traces of Jang's existence through "extensive executions" of his family, including the children and grandchildren of all close relatives. Those reportedly killed in Kim's purge include Jang's sister Jang Kye-sun, her husband and ambassador to Cuba, Jon Yong-jin, and Jang's nephew and ambassador to Malaysia, Jang Yong-chol. The nephew's two sons were also said to have been killed. At the time of Jang's removal, it was announced that "the discovery and purge of the Jang group ... made our party and revolutionary ranks purer ..." and after his execution on 12 December 2013 state media warned that the army "will never pardon all those who disobey the order of the Supreme Commander".
O Sang-hon (Chosŏn'gŭl: 오상헌; RR: O Sangheon; MR: O Sanghŏn) was a deputy security minister in the Ministry of People's Security in the government of North Korea who was reportedly killed in a political purge in 2014. According to the South Korean newspaper The Chosun Ilbo, O was executed by flamethrower for his role in supporting Kim Jong-un's uncle Jang Song-taek.

Don't just kill somebody, kill all their relatives too. We all have a drunken uncle that likes to act out at Thanksgiving. But let's be honest. Who here has ever shot at him with an anti aircraft gun?

Where did he learn this stuff, from a Marvel comic? Galactus was a big pussy next to this guy. Oh, yeah, he has his brother whacked too last year. Sounds like somebody we can definitely do business with.


Trump: “I think he liked me and I like him. And I understand the past and, you know, nobody has to tell me, he’s a rough guy. He has to be a rough guy or he has been a rough person. But we got along very well. He’s smart, loves his people, he loves his country. He wants a lot of good things and that’s why he’s doing this.”Van Susteren: “But he’s starved them. He’s been brutal to them. He still loves his people?”Trump: “Look, he’s doing what he’s seen done, if you look at it. 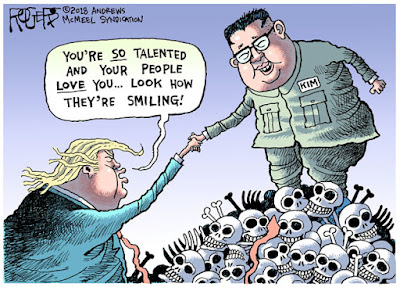 I believe that LRM ( Littel Rocket Man) also had his 1/2 brother killed (poisoned) at the airport in Malaysia.... he had two ladies poison him. I wonder if the Secret Service searched his body (LRM) for concealed weapons, poison, etc. before he met Trumpster?

I wonder how little rocket man got that scar on his forward...
possibly playing with a friend as a kid. His father probably had his playmate boiled in oil as punishment. If there's a special place in hell for Trudeau, where are they going to put rocket man's eternal soul?