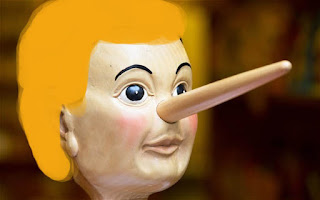 Let's be clear. Politicians and leaders have always lied. From all parties. Machiavelli thought it an essential attribute for the job.

President McKinley's lie about the Spanish sinking one of our ships, the U.S.S. Maine, started the Spanish American War in 1898. LBJ concocted a fake story of being attacked in the Gulf of Tonkin to gain support in Vietnam.

Reagan signed the Boland Amendment forbidding arms sales to Iran and then did exactly that and traded arms for hostages. Clinton never had sex with that woman. The list goes on and on.

Always thought that Nixon was king of the hill in the prevarication department but he is not even in the same league as the current President. I think Nixon knew when he was lying. Trump, who is not nearly as smart, or even venal, as tricky dick, appears to believe his own lies. Wouldn't know the truth if it hit him on the head. Makes Nixon look like George Washington. And his administration seems to follow suit, from Sanders to Nielsen to whomever. 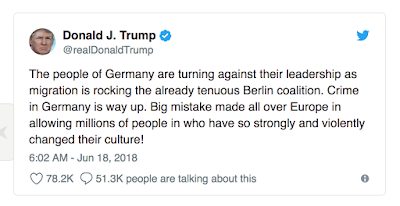 Which is all vell and gut except for one thing; German's crime rate is actually going down.

In fact last year Germany had the lowest crime rate in the last twenty five years.

*
There are sites that are tracking the Presidential lies of this President but they come so fast and furiously that I stopped checking when they started going over three thousand or so. In the first 466 days. This works out to a clip of about 6.5 per day.

This is a truly astounding metric. I have always considered myself a pretty good fibber and I would be hard pressed to match such a number. It is so bad that I heard Kellyanne Conway defend him the other day by saying that he often tells the truth too. Really?


“The president says plenty of things that are true and right and important to America ... He’s not serially untruthful.” Kellyanne Conway

He may not always tell the truth but he's not serially untruthful? Is that the new standard? And why does it sound like more crap?

*
His aversion to the truth just sets a new standard for humanity. When confronted with a lie the other day about dictating the famous Russia memo, he said that, and I am paraphrasing, it was okay because he wasn't under oath talking to a tribunal, he was talking to the fake news New York Times.

Why would a rational person believe a single thing this guy ever says? And Sarah Sanders is perfectly content to lie to back him up, to promulgate bullshit and deception like he had nothing to do with drafting the statement. The whole White House, from Trump to Pence to Sanders on down, just a first class bunch of bullshit artists.

*
Roger Stone and his pal Michael Caputo, two friends of the Donald, hip deep in Russian collusion, seem to be carved from the same blarney stone. Never met any Russians, swear under oath, but when confronted by text messages that shows they did, say that they merely forgot. Very convenient. And they are now indignant that somebody had access to their texts and emails.

The Russians wanted some big money for dirt they had on Hillary.

Where they are promptly turned away.

Pro Publica has this recording of kids separated from their parents.
https://www.youtube.com/watch?time_continue=210&v=PoncXfYBAVI

This shit is pushing me over the edge.

I agree with a Jon! More unbelievable every day!