Vlad asked me to write something hard hitting and pithy but I am afraid that I am just not feeling it yet. More like a random assortment of non sequiturs and mumbo jumbo coursing through the brain today. Had a dream last night that I was on the top of a mountain with a hippie or maybe native american group. Very tribal in either case. Somebody rolled a large elliptical rock off the side of the cliff. I mentioned somberly that when you drop such a rock, one must take responsibility for where it lands and who it falls on. If Nelson, I mean Grumpy, was still around he could tell me what it all means, he used to regularly explain my dreams on this forum but he has been gone for a very long time. Is he still alive? Lot of old people I miss, Window Washer, Randy, even Uncle Rufus, who left in a huff and a snit. Anyhow politics is quickly becoming a no fun blood sport, our fearless leader would have us believe that hispanics are rapists, blacks are low i.q., orientals are obnoxious, and if you happen to also be a woman coupled with any of the aforementioned, watch out! You know who is going to sick the brown shirted minions on you. He really seems to enjoy targeting women. Womp womp. Not sure if we are on the eve of the holocaust or the civil war but the lines are clearly drawn. Outrage machines on both sides will be operating at full tilt until the midterms, wouldn't blame anybody for switching the channel or spending more time in the garden away from their favored information messenger. Why does every nursery have to have a metal tyrannosaurus sculpture these days? Getting very cheesy but everything is cheesy, from your vinyl fencing to your Kardashians to your polyester clothing to the stupid stick figure family on the back of your suburban. We need to get lean and mean and start the troops drilling for the eventual invasion of Canada. Get our national mojo back and don't stop until we plant our flag back in Nova Scotia, where President Monroe always thought it should be. Free the smoked salmon... Ultra Orthodox jews close their eyes when they fly El Al and won't sit or look at women. They could teach Mike Pence a thing or two about whacked out religiosity. Remember two weeks ago, the dems had peeled off a bunch of gop votes to vote on a DACA and immigration bill and Paul Ryan said no wait, don't do that, we will have our own bill, wait, make that two bills which both failed miserably when Trump tweetpedoed them in the womb and then they have the nerve to say that dems wont work with them in a bipartisan fashion. Have we ever had worse, more partisan a-holes at the helm than Ryan and McConnell, ever? And now SCOTUS has given the states carte blanche to smite the incoming moslem hordes and rig the gerrymandered districts and it is up to the challengers to prove their incontrovertible bad faith. Is this a horrible reality t.v. show or a bad national p.c.p. trip? Mommy I'm scared I had the worst dream, oh no mommy, you mean it is real? Arggh! 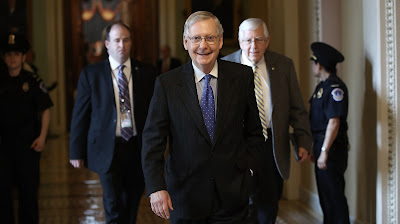 I am afraid that it is all tooooooo real!

Nelson (Grumpy) is still around. My brother plays tennis with him.
Barbara