We have been the recipients of some wonderful and extraordinary acts of kindness of late, some that I won't discuss right now. Thank you! Last night Don and Diana took us out for a nice dinner and then to a Beach Boys concert at Pala. 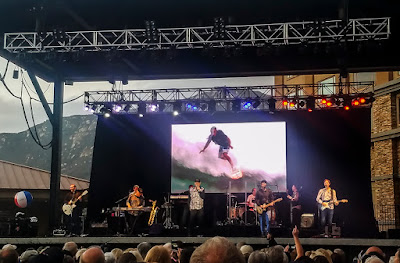 I had seen the Beach Boys in the seventies, with a Wilson or two and Jardine. This was a different band, Mike Love, Bruce Johnston, Mike's son and a bunch of other guys. John Cowsill on drums. That Cowsill.

I am a critical sob but I have to say, the band was tighter than the original and the harmonies were perfect.

And it doesn't get any better than a Beach Boys harmony unless you somehow find yourself in a Gregorian chant.

Some of the song selection was a bit iffy (ballad of  ole betsy?), at times it was like a greatest hits package of the fifties but they still managed to hit all the right spots.

Audience looked older than my father and he is dead. Mike Love is still a funny guy.
Posted by Blue Heron at 10:13 AM

Liz and her amiga were there... they thought it was great!

I saw them in 1961 or 62 at Surf-O-Rama at the Santa Monica Civic Auditorium. They were just starting out and playing in the lobby... outside where the surf movies were shown!!