In early 1921, an article in Good Housekeeping signaled the coming of a law that makes President Trump’s campaign for immigration restriction seem mild by comparison. “Biological laws tell us that certain divergent people will not mix or blend,” it read. “The dead weight of alien accretion stifles national progress.” The author was Calvin Coolidge, about to be sworn in as vice president of the United States. Three years later, the most severe immigration law in American history entered the statute books, shepherded by believers in those “biological laws.”

I started reading this and remembered reading about the historic systemic discrimination in the Ivy League colleges, which may continue to this day. See Harvard Is Being Accused Of Treating Asians The Same Way It Used To Treat Jews.

As Okrent points out in the first article, racial quotas are not new.


The Chinese Exclusion Act of 1882 was avowedly racist. In 1923 a unanimous Supreme Court declared that immigrants from India could be barred from citizenship strictly on racial grounds.

Fearing an influx of jews and Italians from Europe, a limitation on Southern and Eastern European immigration was first proposed in 1909 by Senator Henry Cabot Lodge. The Immigration Act of 1917 further restricted immigration from Asia.


The 1917 Act implemented a literacy test that required immigrants over 16 years old to demonstrate basic reading comprehension in any language. It also increased the tax paid by new immigrants upon arrival and allowed immigration officials to exercise more discretion in making decisions over whom to exclude. Finally, the Act excluded from entry anyone born in a geographically defined “Asiatic Barred Zone” except for Japanese and Filipinos.

I started researching the history of quotas in the U.S.A. and read about the Immigration Act of 1924 which included the National Origins Act and the Asian Exclusion Act. This reduced immigration 80% from Pre World war I numbers, to approx. 165,000 people.

According to the U.S. Department of State Office of the Historian, the purpose of the act was "to preserve the ideal of U.S. homogeneity." Nordic types were welcome, Italians, Jews, Greeks, Russians and Spaniards, not so much. Italians had been hired by the mining companies as strikebreakers and this angered the native workers. In addition there was an anti catholic bias that targeted the Irish and Italians and the latter group were thought by many to be anarchists.


“Whether we like to admit it or not, the result of the mixture of two races, in the long run, gives us a race reverting” to the “lower type.” Lower than Nordics were the questionable “Alpines.” Lower than the “Alpines” were the woeful “Mediterraneans.” And, he concluded, “the cross between any of the three European races and a Jew is a Jew.” Madison Grant The Passing of the Great Race

But racial quotas in this country go back even farther. The Naturalization Act of 1790 said that only white people were eligible for naturalization.

It was modified in 1870, when eligibility was extended to people of African descent because of the Thirteenth and Fourteenth Amendments. 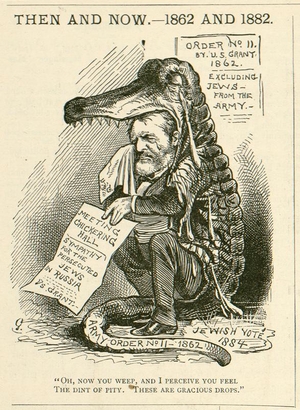 General Grant actually issued an order, General Orders #11, expelling all jews from his territory under his military dominion on December of 1862, the order expelled all Jews "within twenty-four hours from the receipt of this order."


General Order No. 11 was an order issued by Major-General Ulysses S. Grant on December 17, 1862 during the American Civil War. It ordered the expulsion of all Jews in his military district, comprising areas of Tennessee, Mississippi, and Kentucky. The order was issued as part of a Union campaign against a black market in Southern cotton, which Grant thought was being run "mostly by Jews and other unprincipled traders."

He was overruled by President Lincoln a few days later on January 3, 1863. The expulsion was a decision Grant was said to have later regretted, although some felt the contrition was mere political expedience.

Racism in education appears to be as American as apple pie and Kate Smith. Hard to forget the Emory University Dental School scandal.

Actually there is so much of this stuff in our collective history my arthritic fingers would get tired cutting and pasting it all for you. Go here and here and here if you need more. And things appear to be getting worse on college campuses, not better.
Posted by Blue Heron at 5:24 PM