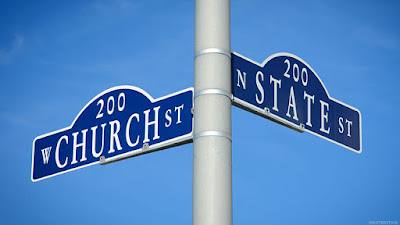 You may have heard about the dustup in Hoschston, Georgia this week.

The Mayor of the town, Theresa Kenerly, and a city councilman had a conversation in a closed door council session about a job opening they were trying to fill.

The mayor said that she didn't think the town was ready for a black administrator, one of four potential candidates for the position.

The councilman, Jim Cleveland, agreed. And his justification was eye opening.


I’m a Christian and my Christian beliefs are you don’t do interracial marriage. That’s the way I was brought up and that’s the way I believe...I have black friends, I hired black people. But when it comes to all this stuff you see on TV, when you see blacks and whites together, it makes my blood boil because that’s just not the way a Christian is supposed to live.

Another council person was shocked by the repartee and was told by the city attorney not to put her concerns in writing. In any case, as you can imagine, there is now quite a hubbub and current calls for the Mayor to resign. Racial discrimination in hiring has been against federal law since passage of the 1964 Civil Rights Act.

The reason I bring the incident up is because this is a week after Trump enacted one of a series of religious liberty bills, this one allowing health care workers and large corporations to refuse to provide services if they run afoul of their religious inclinations.

And I think to myself and extrapolate, well doesn't it follow that the Councilman in Hoschston has a sincere religious belief or moral conviction against miscegenation and the mixing of the races? Why do we not honor his sincere theological convictions? After all, it is forbidden in the bible. Cursed be the son of Ham.


Though the U.S. Supreme Court has long recognized that religious freedom should not be interpreted to permit harm on others, the Trump administration has redefined the extent of religious liberty protections, establishing a broad license to discriminate. Former Attorney General Jeff Sessions’ guidance on “Federal Law Protections for Religious Liberty”—which he claimed would clarify the existing protections regarding religious liberty—serves as the groundwork for writing discriminatory actions into law. The guidance prioritizes religious exemptions over all other rights, and it defines the constitutional and statutory protections of religious liberty broadly so that they can be widely implemented. For example, previous analysis by the Center for American Progress found at least 87 regulations, 16 agency guidance documents, and 55 federal programs and services that the guidance could undermine—most of which the Obama administration created to advance LGBTQ equality and prohibit federally funded programs from discriminating, including on the basis of religion.The guidance establishes an overarching license to discriminate for the federal government. Moreover, it puts vulnerable populations at risk of being denied equal treatment under the law.

Dangerous stuff.
Posted by Blue Heron at 9:46 AM

The concept of race does not exist in the bible. The bible talks about tribes, peoples, nations, but not about race. God created humans in His image. All of them and in wondrous beauty and diversity. Race is a human construct based on the sinful desire to elevate oneself above others. It helps to convince oneself that others are less than human, so one can be justified in mistreating them. The American preoccupation with race is sinful, offensive and highly destructive. It is so insidious that it is difficult to imagine a path to extricate our society from this classification. If we begin to ignore race, how can we overcome a history of injustice and the legacy thereof? But if we don't, we will never move beyond this way of thinking about our neighbors as other and different.

P.S.: The assertion that you were taught sinful ways by someone else is no excuse for your continued sinful behavior.

Finally, someone willing to talk about the Son Of Ham. Wasn’t he the guy who killed all those innocent people in NYC decades ago?
bf

Ham and all of his descendants were cursed by his father Noah for all time, because Ham had looked upon his father’s nakedness.

Some Christians believe negroes are the cursed descendants of Ham.

So some Christians believe Noah's no-expiration date curse is why white people should not marry black people. Mormons (my relatives) actually believed that crap until recently. This is why the LDS formerly denied the priesthood to black folks and most definitely didn't approve of blacks and whites getting married (they still don't ordain women into the priesthood).

There's nothing else in the Bible that even remotely infers interracial marriage is wrong.

In fact, the Old Testament says Moses married a Cushite. Cushites were Ethiopians, so Moses’ wife was black. Miriam, Moses' sister did not like that her brother married a Cushite and so she rebuked Moses. Because of her judgement, God judged Miriam and gave her leprosy.