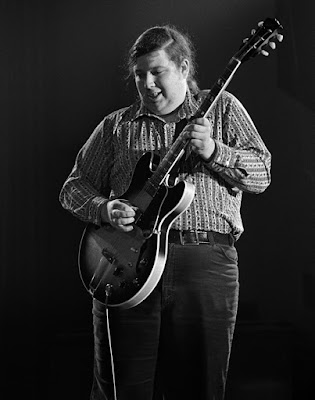 I feel really lucky to have seen Mike Mann aka Hollywood Fats play the blues while he was alive. Fats was the real deal, the West Coast Mike Bloomfield.

As good as it gets. When he was a kid his mom would take him to blues dives in Los Angeles so he could jam with the greats. The story is that Buddy Guy gave him his nickname.

He was friends with my old pal, the late Jose Kent, as was the bass player here, the great Larry Taylor. Jose took me to see the band a couple times up at the old White House Tavern in Laguna.

Mann had so much talent and great tone, but like many of the great musicians he idolized, he got nailed by a junk addiction and passed away at the tender age of 32, far too soon. What a shame that he never achieved the acclaim that he was certainly due.
Posted by Blue Heron at 12:50 PM