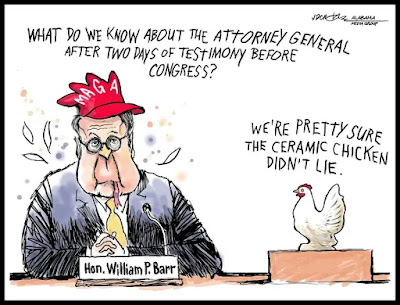 One of the interesting things about our current division in America is just how distant we are from each other.

With twin media universes, Fox, Townhall and National Review and that ilk on one side and practically everybody else on the other, there is really no middle ground.

And the last election didn't help, many of the moderates from either party were exiled into deep space, so we are left with the more hardcore firebrands and lunatics. 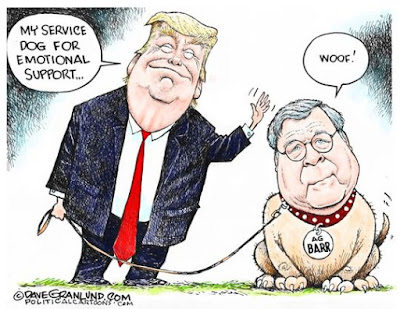 The current Barr hysteria is just plain ugly, on either side of the divide. Both sides are playing to their most rabid base. Talking over each other, definitely not to each other.

Would it have been so bad if Barr had talked to House members and not their staff lawyers this morning? Of course it wouldn't. And would it have killed him to talk to the committee lawyers? Hell no.

But this is a battle royale pissing match. Rub your opponents nose in it, show them who is boss. Of course Barr made his own bed with this report, he eschewed all sense of objectivity with his fat thumb firmly placed on the scale.

My advice is to turn the whole thing off, kit and kaboodle. Why get your knickers in a twist? Nobody wins in a civil war. You could disclose the most egregious Trumpian act at this point in time, it still wouldn't move the needle on a MAGA lover's metronome one click. Conversely you could trust in the AOC's, Sanders and Warrens of the world and watch them try to turn the United States into a Scandinavian welfare state with more brunettes. 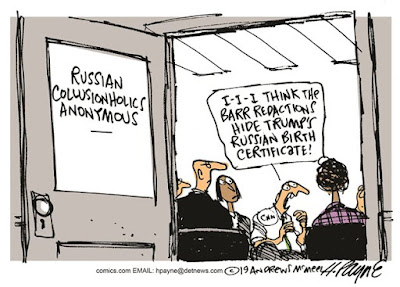 Mueller's report got hijacked, he was stupid. He thought the evidence was so great that the Attorney General would have to do the right and proper thing.

I went to the cardiologist today, blood pressure down, weight down, all systems working pretty well. Last thing I want to do is let a rabid 24 hour news cycle keep me in a permanent tizzy.

It's exactly what he did. You sign your name or you don't get published again, coward.

Yes, that's the tactical problem, but the strategic, big picture problem is so much worse. Barr and his ilk apparently believe in an imperial Presidency, where the Executive branch rules over all, with no effective checks or balances. If the Judicial and Legislative branches can be Trumped (sorry, couldn't resist) by any President's will, then what we have is a monarchy. I for one kind of liked the Constitutional system of three equal branches of governance, checking each other. Barr's approach tears all that down. Trump has claimed lately that he was the victim of an attempted coup, which is just another example of his projecting his own actions onto others. A slow motion coup is happening, enabled by a captive Congress and Judiciary. You conservatives should consider a future in which the entire country - budget, law and culture - is ruled by an authoritarian leader who you don't agree with. It's in the making right now.

You are spot on Jeff. What is interesting to me is that the executive branch is now trying to vet congress's oversight intention and comply with nothing. Mueller's Special Counsel appointment was an extension of the Executive Branch, Congress has an altogether different role and Trump doesn't get to pick and choose what he complies with. He is content to wait the thing out in the courts, will be interesting to see if his tax returns ever appear and his relationship with Russian and Saudi money ever fully exposed.

Change every mention of Barr to Holder and we're in a time warp whirling back in a space/time continuum. 'How dare they not grovel at the sound of my edict!'. That was either Fat Jerry Go-Nadler, or Darrell Issa, whichever end of the wormhole you are listening from. This will end up just like that.