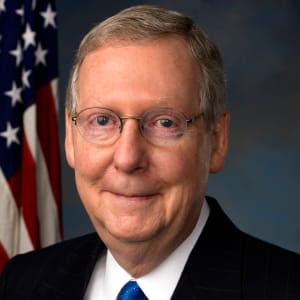 
“The attorney general reports that Russia carried out online disinformation campaign and computer hacking efforts designed to sow discord in our nation and interfere in American politics. It is deeply disturbing that the Obama administration was apparently insufficiently prepared to anticipate and counter these Russian threats,” McConnell said. “It was hardly a secret prior to November 2016 that Putin’s Russia was not and is not our friend. And yet for years, the previous administration ignored, excused and failed to confront Putin’s malign activities both at home and abroad.”

Which would be funny if it was not so ironically sinister and dishonest. Since it was Mitch McConnell himself who stood in the way of the last administration divulging the details.

The Obama White House, swayed by enormous amounts of evidence compiled by the U.S. intelligence agencies, asked for  bipartisan support to push back against Russian intrusion.

But it didn't happen – because McConnell refused. He didn't want to go public and he questioned the validity of the intelligence. He finally agreed to a watered down version that didn't mention Russia. Time to look in the mirror Mitch, if you are still capable. If you want to find a reason and a person most responsible for the breakdown in governance and comity in this country, look no farther than Mitch.
Posted by Blue Heron at 11:57 AM