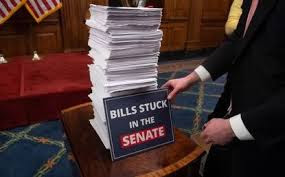 There are 395 bills passed by the house languishing right now on Mitch McConnell's desk, bills destined to never see the light of day, much less a vote. My GOP friends (yes, I still have many) are giddy about this, no bills means limiting government in their way of thinking.

We could argue about the wisdom of this but why bother, no one is moving off their positions these days, the country being so politically balkanized. The center, as I repeat ad nauseum, is dead.

But if you think that things have crawled to a standstill in this political dynamic, try to imagine a future where Bernie Sanders is President. It will be pitched warfare. You think Mitch McConnell will move a finger to help enact his agenda? Beyond doubtful.

The left says, well, we have to take back the Senate too but in this safely divided and gerrymandered country that we live in, what is the real possibility of that? Very slim I think. With Bernie leading the nation and an entrenched GOP senate we are guaranteed to stay at a dead stop. With Trump at the helm and the current Senate in place, just watch what happens to Medicare and Social Security, that is why Mitch won't hold budget discussions before the election.

I am old enough to remember a day when Democrats and Republicans worked together across the aisle, they put aside their differences and worked together for the good of the country; Ted Kennedy and Orrin Hatch, the Concord Coalition, Tsongas, Cohen, Rudman, Baker. That bipartisan train has long since left the station. We now live in the Senate Majority Leader's twisted version of bloodsport, winner take all with never any talk of compromise.

The current rancid climate didn't start with Donald J. Trump but he poured gasoline on the fire and brought the presidency down to a place with the dignity and cultural equivalence of naked mud wrestling. He has been utterly enabled by a bunch of GOP hypocrites who won't utter a peep about his despicable behavior as long as they get their agenda enacted. The hope, or my hope one day, is to watch these rats scurry off a sinking Trump ship and trip over themselves disavowing any connection to the stench of this Presidency. 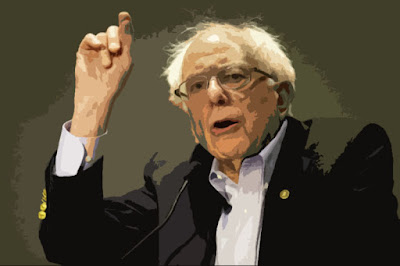 I am not a Bernie Sanders guy. If I had my druthers, Biden having entirely lost his fastball, I would pick Pete or Amy this time.

My hope is for the country to start working towards the middle again, to find a way out of our cultural civil war, if at all possible.

But the rise of a poisonous autocrat with no respect for the law like our current incumbent is causing the pendulum to swing and the result might just be a move to a nearly equally pernicious left.

People are angry, the national demographics are changing, income inequality is a fact of life, many of the young and minorities feel completely disenfranchised and the blowback could be powerful and even lead to a Sanders presidency.

My position is anybody but Trump. Bernie would be my last choice on the Democratic side but if we have lived through the Trump debacle and travesty, I guess we can live through Sanders's reign too. Anyone but Trump.
Posted by Blue Heron at 9:27 AM

If I have my druthers I'd pick anyone but Robert for my morning blog.

I have been trying to school you on the reality of Balkaniza-shun (a-dyno-mite) but you just keep forgetting, our system is set up this way. The days of the Donkey Squad having 40 years of control of anything are ovah, as my pool playing partner Ahmed would have said.

Your idea of compromising across the aisle is for all of the GOP to pull a Mitt and kowtow to the Lords of the Capitol. You had 8 years of Hussein O' not having to compromise evah, and the resultant executive fiat forthcoming. Why? cuz the media wing
of the DNC: ABC, CBS, CNN, NBC, NYT, WAPO, ad nauseum, let him get away with it. Why was there no gridlock under the Hawaiian/Kenyan? Because the GOP was ignored, forgotten, put in there place. Lapdogs again. That's what you call Kompromizing. And that's what you yearn for.

Well sit back and enjoy the next 12 years of Trump/Pence/Haley. It's gonna be fine!

Did you see Bernie praising the Cuban revolution last night on 60 minutes? Dumbass.

NIce valley picture! Natural color? You don' like Bloomberg? I hope he becomes more passionate but I think his heart is in the right place. any rate.....ABT!!!!

There won't be a socialist POTUS in Bernie's lifetime. You can take that to the bank. I really like Tulsi though. The rest of the field is useless.

Well Said. Keep up with your perspective.

Tulsi in her wetsuit ... at the Inaugural, dude.

Hey big scrota. Cool, you take your pound of flesh and when we get a chance we will tear off a chunk of yours. Sounds very civilized.

I really dislike Bernie. I belong to the Warren wing of the party. But I will
Vote for Bernie if I have to. Hopefully,super Tuesday (which we both vote on) will pull votes from Bernie

Hey Robert, I remember that headline...

“Some people are slamming the Senate saying that there are 390 bills that were voted on in the House that the Senate is sitting on because Sen Reid refuses to bring them to a vote.” August, 2014

You may not have remembered, but you’re welcome 😉

I believe as Americans we live in Disneyland. We all think we have it so bad as a nation we are heading to a totalitarian nation. As long as we have our “information and an I phone life will be good. Sad no one works , everyone has massive contracts to plumb a toilet cause we have lost our character no ones word means anything. I feel bad for our children. We can’t even agree on sex anymore with out a lawyer in the room Make term limits get lifers out make them pay social security like the rest no payroll for life. Thought that was what a civil servant was a servant of people. Just look at before these fools net worth and after elected. Criminal and we are all paying for it. Thx for blog and my rant

By all means tpk, lets have a perpetual tit for tat pissing match.


Bernie will be the democratic nominee unless the DNC figure out a way to cheat him out of the race using super delegates.

What's the alternative ? Klobuchar is toast, so is Warren, Bloomburg is a non starter and Buttigieg is just another corporate lackey. Steyer never did have a chance.

I'm hoping like hell Sanders will win the general too. I'm one of the millions of Americans who donate to his campaign regularly.

He has a very good chance considering the alternative, the pathological liar who currently (occasionally) occupies the Oval Office.

Sanders has millions of super enthusiastic young people on his side and old progressives like me who support him 100%. If he does swing the nomination I hope mainstream dems will get on board the democratic socialist train.

If elected Bernie actually will "drain the swamp" unlike Uber-Fuhrer Trump who's making it deeper every day as fast as he can.

If by some remote chance one of the 'moderates' wins the nomination he or she will lose to Trump. If by some miracle a "moderate" dem did win the election you could expect more of the same old corporate shit.

I share a lot of your feelings. Bernie is too left, Trump will run commercials with him praising Cuba until the cows come home. Biden would have been a good candidate about 5 years ago... he has lost a step or two. Amy is very bright , but I don’t think we are going to elect a woman. Pete is also very bright, maybe the brightest of the group, We are not going to elect a gay guy married to a man. Maybe next time. Steyer doesn’t have a chance. Who else is there? Bloomberg, I guess. Not the perfect candidate but I think he can go toe to toe with Trump plus he has plenty of $$$$.

The key to this next election is to get rid of Trump. He is awful as well as a very poor excuse for a human being! I hate him! I will vote for anyone the Dems finally nominate. Even Bernie!

I forgot about Liz Warren.very bright lady, too schoolmarmish. Trump will run the Pochahantas thing in to the ground. She made a big mistake releasing her DNA results.


Insulin in the United States costs $110.00 per vial, a vial of insulin costs $11.00 in Canada, in Malaysia vials of insulin are free.

It costs between $2.28 and $3.42 to produce a vial of insulin. Insulin is so expensive in the U.S. that many diabetics are forced to ration it, which of course leads quickly to illness and early death.

"Ten companies, including nine pharmaceutical giants, accounted for half of the health care industry's $50 billion in worldwide profits in the third quarter of 2018, according to an analysis by Axios’s Bob Herman. Drug companies generated 23 percent of the industry’s $636 billion in revenue — and 63 percent of the total profits."

“Americans spend a lot more money on hospital and physician care than prescription drugs, but pharmaceutical companies pocket a lot more than other parts of the industry.”

Mike Bloomburg would do nothing to change that.

Bloomberg would do nothing to address social and economic inequities of any sort, he's in the 1% of the 1% club. He is the 9th wealthiest person in the world, he's worth 69.1 BILLION dollars. He would never go against his own best interests and those of his class.

Bernie will fight for social and economic justice. He is sincere and consistent in his beliefs. He has been saying the same thing for many years. He is electable.

I gotta go with Bloomberg. Only logical choice as the center (Majority) will go with him.