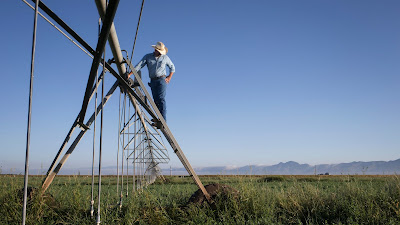 I read about this story a few months ago, big out of state corporate farms moving into the Arizona desert, drilling really deep in an unregulated environment and wouldn't you know it, the locals' wells are now running dry?

I meant to write about it before. This was the excellent NBC article that alerted me to the situation.


...After living in the state for 32 years, she finally bought a house in the small town of Elfrida that had “million-dollar views” and farmland to grow crops.
A few years after moving in, in 1997, though, her well went dry. Like all homes in Cochise County, hers depended on underground water, so she took out a $15,000 loan to deepen her well. Seven years later, it went dry again, and she couldn’t afford to borrow the $35,000 to drill a new, deeper one.
“I saved all my life, I saved in the military, I saved as a teacher, I saved, and saved, and saved — that's the way I was brought up,” Reynolds, 73, said. “And I lost everything.”
She was forced to abandon her home, move back to Bisbee, a city 30 miles southwest where she had lived previously, and put her house on the market. Eleven years later, it’s still for sale, and she’s still paying off the loan on that dry well.


Arizona’s groundwater law largely does not apply to rural areas like Willcox, which means that land is particularly attractive to large farms. Companies can pump as much water as they want; they don’t even have to monitor how much they use.

And they appear to have the local politicians firmly in their pockets.


...additional regulations have faced opposition from some agribusinesses and the Cattle Growers Association, a lobbying group, as well as elected officials including state Rep. Gail Griffin, a Republican who chairs the Natural Resources, Energy and Water Committee in the Arizona House of Representatives. Thomas Buschatzke, director of the Department of Water Resources, said he couldn’t convince the legislature to consider the water monitoring bill.

In southeastern Arizona, farms drill a half-mile deep while families pay the price.
Posted by Blue Heron at 12:07 PM