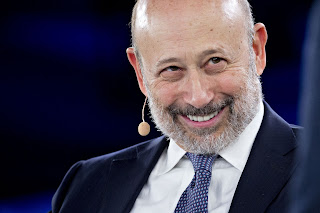 Investment banker Lloyd Blankfein says that he might have a harder time voting for Bernie than Trump.


“Look, it’s crazy not to acknowledge the economy has expanded under Trump,” Blankfein said, attributing the growth in part to the 2017 GOP tax law and Trump’s elimination of “dopey regulations.”

The ex Goldman Sachs CEO and self professed democrat is certainly entitled to his opinion. I have my own problems with Bernie's policies but I don't need to go into that now. While you can argue about the magnitude of Trump's effect on the economy and there is certainly room for legitimate disagreement, it is easy to forget that Obama was tasked with rescuing the country from a devastating Bush recession. You didn't clean up our mess fast enough!

What I take issue with is the "dopey regulations" part of his statement. Which dopey regulations? The ones that would keep banks like Wells Fargo from opening sham accounts for unknowing consumers? Or the Volcker rule that kept big banks from risky speculative trading? The ones that protect our environment and well being? Trump has dismembered consumer and environmental protections in this country and left a trail of tears too long to delineate. The effects will be felt throughout the world for generations and I think will ultimately really endanger our planet in a critical way. But by the time it enters the calculus of money people like Blankfein it will probably be too late. 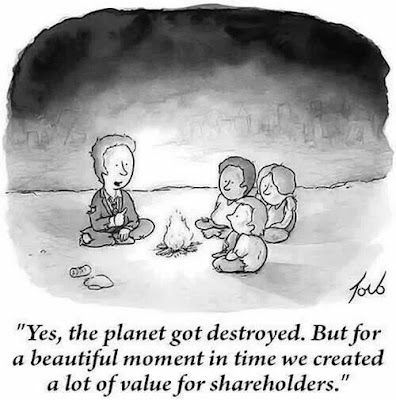 
On Jan. 23, 2020, President Trump unveiled his administration’s Dirty Water Rule. In one fell swoop, the administration plans to declare that a significant proportion of the streams, lakes, bays, lagoons, wetlands, headwaters, and more across the nation no longer count as “waters of the United States.” For those excluded waterways, federal protections under the Clean Water Act will no longer apply, and few protections will remain to stop polluters from dumping toxic byproducts into our waters.
More Mercury, More Problems: Another proposal, dubbed the “Toxic Water Rule,” would weaken pollution controls for coal-fired power plants. Power plants are by far the largest contributors of toxic pollution into our waters, dumping a toxic stew of mercury, arsenic, lead, and selenium into waterways, even though there are affordable solutions to clean up these discharges before they reach our surface waters. Earthjustice has long been involved in this issue.
Skip This Part if You’re Eating: Yet another anticipated Clean Water Act attack concerns a regulation with a viscerally gross title: the “Sewage Blending Rule.” This would make it easier for wastewater treatment plants to release raw sewage blended with treated wastewater into waterways, if their treatment systems get overwhelmed by major “wet weather” events. (In related news, the climate crisis will bring more of these events.)
Another Crappy Loophole: Finally, the Trump administration has adopted a radical new interpretation of some facets of the Clean Water Act, creating a water pollution loophole. The Trump administration’s EPA issued guidance that pollution discharges into protected waters via groundwater are categorically excluded from Clean Water Act regulation. In other words, polluters can get away with sullying clean water by indirectly disposing of their waste through groundwater. Earthjustice went to the U.S. Supreme Court in November 2019 on a case related to this very issue.

Climate change is drying up the Colorado River, putting millions at risk of 'severe water shortages.'

Mercury pollution. Trump's EPA takes a position that is more pro-pollution than the position of polluters themselves.


The Associated Press reported in January, the Trump administration has built up the biggest backlog of unfunded toxic Superfund clean-up projects in at least 15 years, nearly triple the number that were stalled for lack of money in the Obama era, agency figures show.

Executive Orders. Trump simply does an end around to get around environmental safeguards when he finds them inconvenient. Hence the decimation of Border wall environmental analysis. And then there are the executive orders.


The Trump administration, as part of their "Energy Dominance" initiative, has consistently sought to streamline the domestic energy production process. These two executive orders follow in that pattern.
The first order directs the EPA to reconsider a part of the Clean Water Act. "Section 401" of the Act requires any oil or gas project that could potentially contaminate waters regulated under the act to receive state-level certifications and approvals. In the past, states have occasionally denied those certifications, preventing pipelines and other infrastructure from being built. If the EPA re-evaluates this section of the act, companies would be able to sidestep the state certification process, streamlining the pathway to construction.
The second order asserts that the president has the authority to “issue, deny, or amend” any permits for pipelines or other infrastructure projects that cross international borders. Previously, that authority lay with the secretary of state. Most notably, this decision would apply to permitting decisions concerning TransCanada Corporation's controversial Keystone XL pipeline, a project that, if completed, could carry some 800,000 barrels of oil from Canada to the Gulf Coast each day. 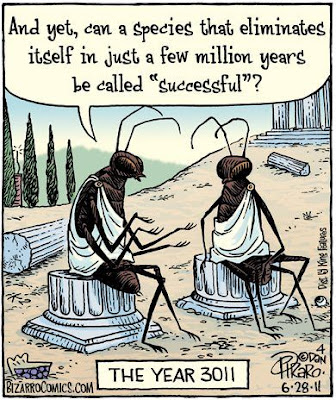 I could go on and on, the problems at Interior, the sell off of public lands to mining and grazing interests, the diversion of water to corporate farming interests that will decimate California fish populations.

The problem with these dopey regulations is that they don't seem so dopey at all when you finally realize how necessary they are to protect us from Trump and the corporate criminal class.

And how someday they might just save you or your loved one's lives.
Posted by Blue Heron at 11:19 AM

The only true pro environment President was Teddy, ( Not to be mistaken with the Kennedy moron, and yes, I know, he wasn’t a president, thank god) everyone after him were all and I mean, ALL, including your beloved Barack, were contributors to the decline of our planet.

The assault in the environment is what drives me most crazy about trump. The damage that's being done might last for 1000s of years. How in the world can people support less clean air and water?