I was thinking about the orthodox jews from Southfield that got kicked off the plane for smelling bad and who are now suing for harassment. Please don't call me an antisemite if I tell you that I have lived with these people, have been on planes with these people and that I feel the pain their fellow air travelers reported. Pugh. 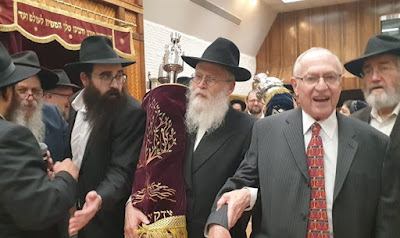 Don't know the deal, maybe it is the 19th century garb, the furry hats, the extra whatever, these are some of the stinkiest folk I have ever encountered. Personal hygiene is obviously not a priority.

I once tried to go to the bathroom in the morning after an all night El Al flight and had to dance and fight my way through about fifteen or twenty orthodox dovening, schvitzing and praying on the back of the plane and frankly thought that I would pass out from the intense odor. Gottenu. Deliver me lord.

I ran this by Morty this morning and he told me that he had once worked in the jewelers district in New York and that he heartily concurred. Fecch. I am so happy I was raised reformed, we obviously got the last talmudic dispensation about soap.

Now obviously not all orthodox jews smell, I have friends and associates that are orthodox that smell fresh as daisies but there are definitely some that should go a little lighter on the torah and a little heavier on the irish spring.
Posted by Blue Heron at 12:16 PM

I have also been on long flights with smelly Orthodox Jews, it can be really bad.
MW

Mix it with the fetid smell of chicken liver and you have a deadly combination.

My friend Girard (a gentile) originally from France, is now a Fallbrook resident. He has an aversion for deodorant, and is the stinkiest dude I've ever met and he seems to take pride in it. At the very least he could care less what other people think about it.

There was a French Canadian named Pierre who lived in Fallbrook until he passed who was legendary for his loathsome stink, which I think he took some gallic pride in.

Exactly! Same with Girard.
Legendary stinkers the Gauls are.

well, Jewish, Unitarian, Methodist to be slightly more accurate, Liz. Mom had a little cavalcade that I don't think I need to fully delineate here. Remember Buzzy tripping the priest at midnight mass?

We were raised culturally Jewish but we missed out on the religion. We're you ever bar mitzvahed? I know that buzz wasn't until he got married. I consider myself to be raised Unitarian,but mostly to learn morals and ethics. I was lucky enough to be stoned for most of the tried at Methodist and Catholic.

I do remember Buzz tripping the bishop.