The situation was not really dire as much as it was excessively restraining. My old van probably will go another 100k miles easy but the load capacity is so small that it is starting to hurt.

If they don't stick me back in a serious immunotherapy protocol after the biopsy next Thursday I have a show in San Francisco and three in New Mexico scheduled in short order. It will be tough in the Caravan and I haven't been driving it lately and it worries me to think about a long roadie. So much inventory and so little space.

So I started looking into my options. I could rent a cargo van. But I called Penske and they wanted five hundred a week plus sixty four bucks a day for commercial insurance plus mileage. Over 5k for three weeks.  Rental prices have skyrocketed. My old pals at Miramar Truck took great care of me in the old days but they sold out to Velocity a couple years back and it has became impossible to work with them anymore.

I started looking at vans to buy. I thought about the Ford Transit and then watched this video and said no way. The Mercedes was out, I don't have the money to fix them. My friend Shlomo is on the second engine on his and frankly, it has been a nightmare.

The Nissan cargo van is okay, Rick has one, terrible on gas and the front end looks awkward to me. Warmboe has a Ram ProMaster he has been very happy with so I decided to look in that direction. I have had very good luck with Dodge.

I thought about a high roof model but encountered many of them up in the Sierras and they didn't really look aerodynamically stable in the wind. I really didn't need the height so much and was envisioning nightmare wind scenarios in the Grapevine. Plus they are worse on gas mileage.

So I decided to look for a low roof 136" wheelbase Ram ProMaster. They come in three lengths and I would go with the middle option between 118" and 154". I went up to the Ram dealer in Temecula. To my surprise and chagrin they had exactly none of them. Ram pulled all the commercial vehicles from the normal dealerships a while back.

I would have to go to Ontario or San Diego if I wanted one. I met two girls at a party with one that they bought in Wisconsin for 7k under MSRP. I called the dealer and they said I was a week too late.

Due to the Nomadland/live in your van phenomenon, there is no inventory, all the dealer incentives have been withdrawn and the dealers are putting a surcharge on the vans, if you are lucky enough to find one. The chip shortage has not helped the situation either.

I called Carl Burger Dodge Ram and they said that they had two coming in supposedly that they had been ordered last November and it would be another month before delivery at the minimum, the price would be over 40k and they would most probably be sold sight unseen before they got there. I couldn't risk them being off on their date and that was a lot of gelt.

I couldn't afford to buy a new van at this point honestly, maybe I could but didn't want to be stretched that far so I started looking for used inventory. A guy in Fontana had some at his lot but his one star reviews screamed shyster and I was in no mood for the b.s..

So I bit the bullet and bought a 2019 from Enterprise the other day with 40k on it, 136" low roof. A few hundred dollars under blue book, just north of 31k. The van was in Ventura so I would forego the heavy transfer charge. They sent it to Long Beach and the guy I was working with drove up and got it and I paid no extra surcharge.

I would like to say that I was in love with it, it had the rear window I wanted as I prefer to see behind me without a camera if I want to and that runs about seven hundred additional bucks to install. But there was a horrible rattle in the rear door.

I asked my bud about the rattle and he said they all rattle and to live with it. I couldn't. So I looked it up on google and discovered the rear hatch was missing a rubber bushing that kept the door tight and apparently stopped the incessant clanking.

It was fairly clean, one ding, which I was not allowed to mention on the contract or the salesman said he would kill the deal. He had a Chevy Supercargo on the lot, for 2k less and less miles, but no bluetooth, no radio or USB and I just did not want to go back to the stone age. I have rented the Chevy before and it was great, actually had an extra foot of cargo length but just way to luddite for long distance trips in the new millennium.

I was told that Amazon has tried (quite successfully apparently) to buy every cargo van on the planet and I can tell you that there is very little inventory out there. The salesman said that people tell him that they aren't going to pay these prices for a used vehicle and he says he laughs at them, the truth is there is very little out there. Try to buy a new vehicle right now.

My van went to the dealer to get the door fixed and I picked it up yesterday. Rattle is gone. 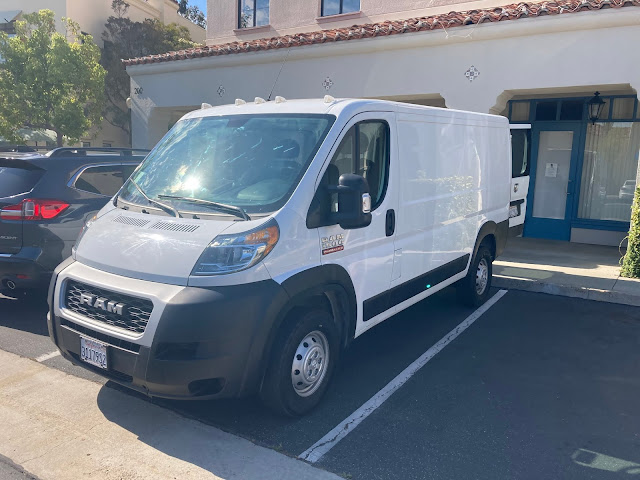 Buying a used vehicle is a little bit like getting a new girlfriend who has already slept with the offensive line and half the backfield, lacks that new car smell, shall we say?
I would be driving something with a little more experience. No problem. 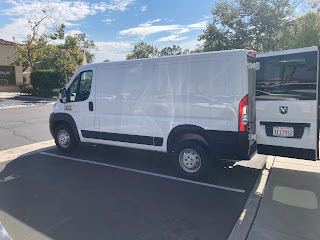 These vehicles are tools, as Bill informs me. In its two years of life it has probably been rented by various contractors who didn't care what they did to the interior and you can see some marks on the paint.
But it drives like a dream and the infotainment system seems to work pretty well. All in all I think it will be okay, inshallah.
It didn't take long to put it to use, stopping at Steinberg's office and picking up a small refrigerator and delivering it to his home.
I have ordered a mat and need to buy some bungees and outfit it with ropes and a stepstool, learn its ins and outs but I think it will be a valuable addition and should soon pay for its keep with its added payload. 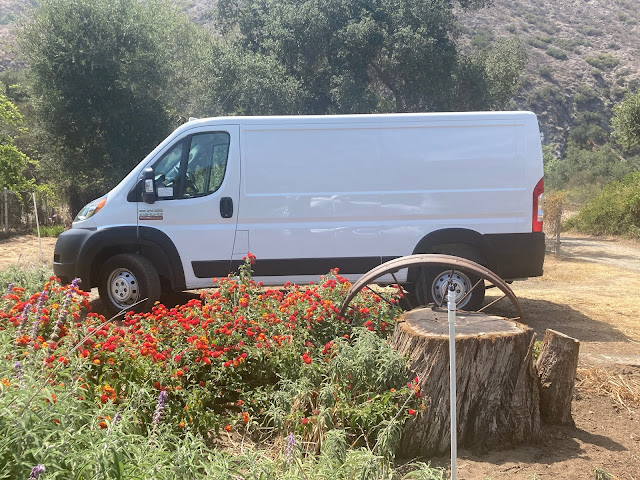 I think I made the right decision on the height, Not being able to stand up fully in my van has never been a deal killer for me to date.
Should dramatically increase my carrying capacity and that should mean more money made at the shows. I am going to sell the Caravan to a friend, few pesky warts notwithstanding.
Will add it to the insurance policy Tuesday, no, you can't borrow it.
Posted by Blue Heron at 7:19 PM

Now you can sponsor a contest to design a mural for the side of the van. I suggest bypassing your most recent t-shirt design. A big pot leaf is out as that is far too pedestrian for these times. However, with those ruled out I am sure there is a vast pool of untapped talent here in Fallbrook that could provide inspiration.

My entry for the van mural contest is FallbrookFish Market lettering with flying fish jumping over fish. It is happy and uplifting with the advantage of deterring theft. After all, who wants to break into a van load of fish?

Jon has the right idea! Although, your recent t-shirt idea does have potential... as long as you don’t plan visiting the center of the country.