It was an interesting week, with normal ups and downs as usual but on balance, with more ups. As I wrote, I was knocked out and received a biopsy on Friday the 9th. This was to take some test samples of a strange bump in a diverticuli in my bladder and find out if it was cancerous or not.

Reality is I am awful lucky to have a bladder at this point, having undergone a stage four malignancy in the laminar wall, not even two years ago. Stage four in the wall, they replace all of your plumbing. If I had listened to the first three doctors I would be pissing through my belly button out of a neobladder constructed from my large intestine right now. I just couldn't do it.

Luckily I found a doctor who would listen and went through a BCG immunotherapy regimen that bought me at least another year. Pretty remarkable really. Never stop being your own fiercest medical advocate. You have more invested in you than anybody else does and you have to keep fighting for yourself or you can quickly become a statistic. Because it is your skin in the game.

Anyway, I had the procedure and the doctor said she would let me know when she got the biopsy results and no lifting (she was worried about bleeding) but I had a new van to pack and went ahead and gutted it out. Because I had a show in San Francisco and setup was Wednesday at noon. Didn't really have any choice with the grunt work, people offered to help but it doesn't really work. I have to pack a certain way.

I finished Monday night and took off for Monterey Tuesday morning. I stayed at Vlad and Natashas', he cooked us a nice meal and I was up at five and out the door. I planned on driving up the coast on the 1 to the 92, cut over at Half Moon Bay towards the South Bay.

You have to leave early to not get embroiled in Santa Cruz traffic and if you go this way, it takes a lot less time then it would on the 101 and is sure a lot prettier. You pass the Pigeon's Point lighthouse and Bean Hollow and all sorts of places I like to kick around in. I didn't take pictures this time but enjoyed mostly having the road to myself along with a few surfers in their vans.

I unloaded and was stunned to see that my long time associate Paul, the large Samoan who runs the parking and setup crew, had lost his leg. He had a leg infection and coupled with diabetes, the thing went septic. Poor Paul, great guy, longtime friend. Told him he needed a parrot. His sons, nephews and nieces packed me in and out. 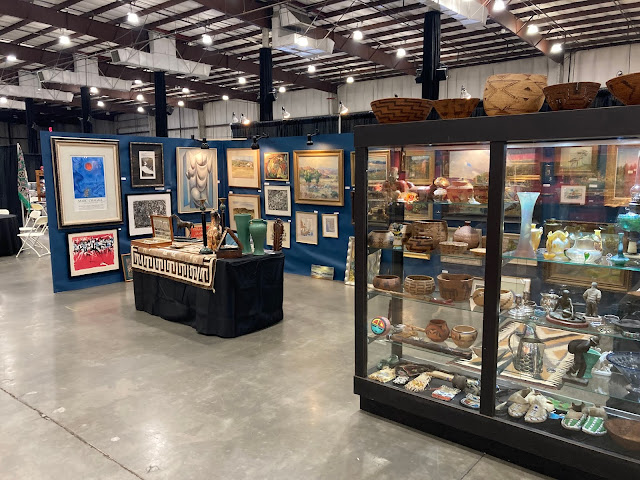 A lot of changes to the business in the year and a half since I have done a show. R & R showcase, the company that provided us with walls and showcases, sold their business to a new person.
I thought that the new vendor had paper for my booth. The Blue Heron typically goes dark blue. They did not. I toyed with the idea of going bare pegboard walls but out of a sense of shame drove up to the city to find backdrop paper.
I got hopelessly lost near Alemany and Bayshore trying to find the place, kept taking the wrong turn and once nearly got myself hit on one occasion when I had to make a blind left.
Setup was made no easier Friday morning when I started pissing blood, never a pleasant experience. She had warned me and I hope that I had not made matters worse but the show must go on. 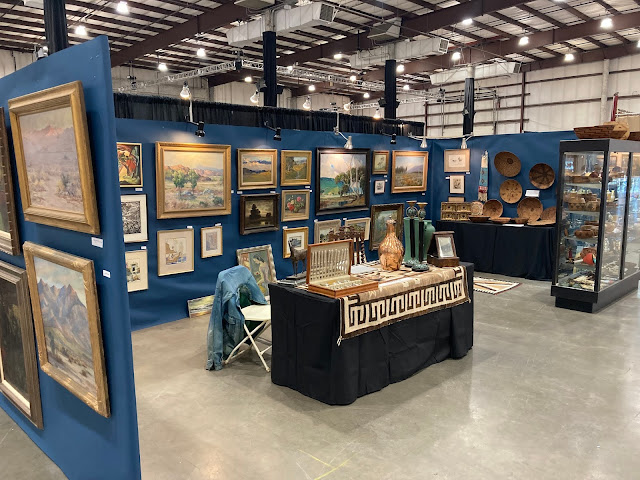 The new van is nice but not exactly fun in the concrete jungle. Of course practically the whole show is now driving ProMasters, Sprinters and Transits, I was one of the very few with the low roof model.
The show has shrunk considerably. I was the only member of my normal posse, Bill, Cam and Rick. They all had other things to do and Rick has a new shop. Bijou passed on the show as well and so did Kelleher. 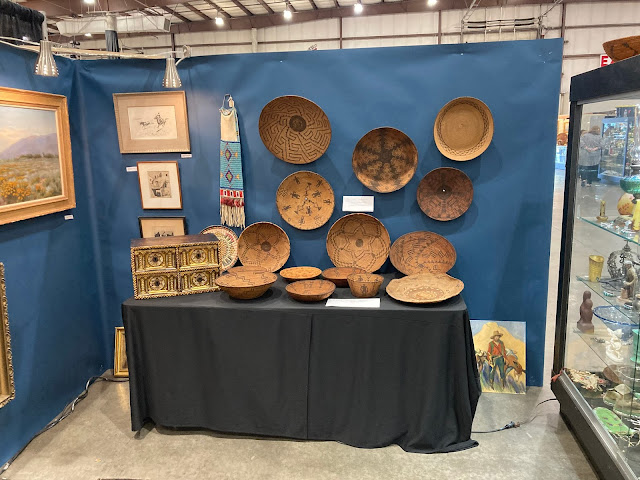 In a way it was good because I sold more paintings without the competition but I still honestly missed my buds. People have to run their lives as they see fit. 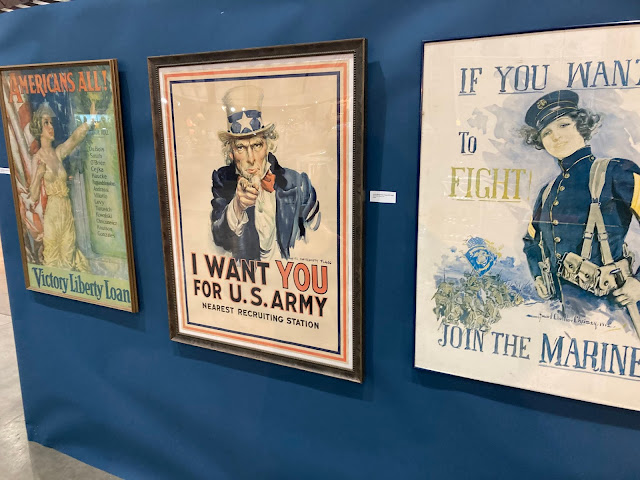 Anyway there are fewer dealers but the ones that have hung in are the pros and the show looked great. Kaplan, Syeed, Sean McGee, people brought beautiful material, the entire venue was very impressive.
Weeded out some of the chaff.
The public was there and they seemed to be buying enthusiastically.
I had a great first day, a fizzly second and a non existent third but all in all it surpassed my expectations.
Was nice to catch up with old friends, dealers and clients alike.
I bought some interesting material there, a lovely early California sycamore and mountain pastel, now hanging in my shop window. A small portrait of a woman that reminds me of the work of John Hubbard Rich.  You can see it peeking out at the bottom left in the picture below. A wonderful carved cane with the head of a whippet and glass eyes and a collar. 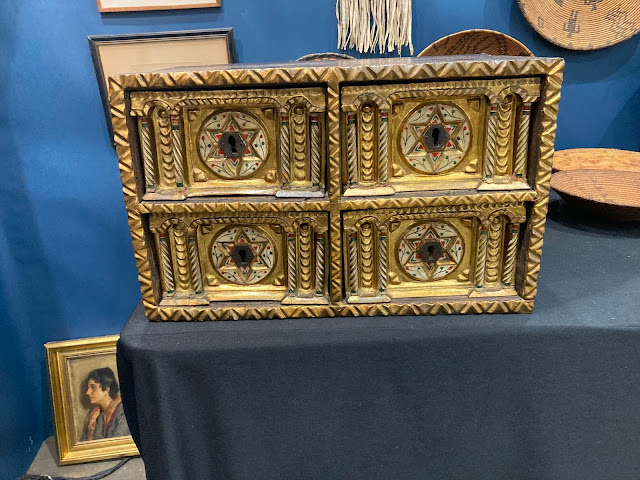 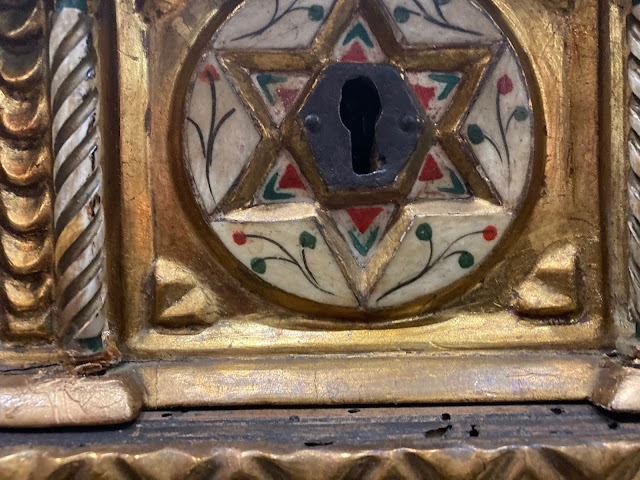 I love this sort of thing and rarely find it. I paid but you have to with this sort of rare material. I feel very lucky to have spotted it and to have known something about its origins. Should be great for Santa Fe next month. 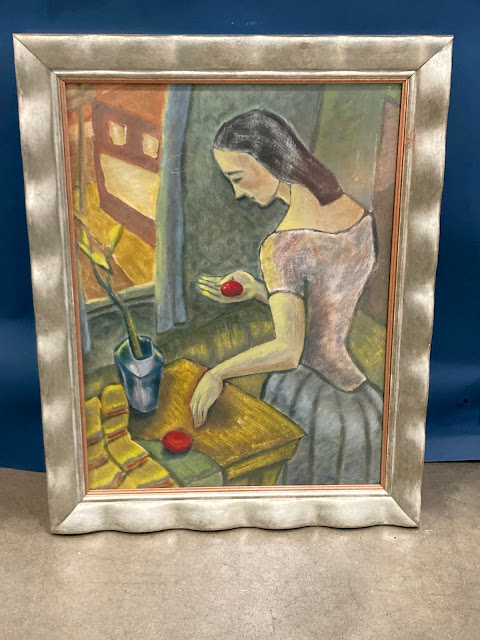 And a fabulous painting by Rose Niguma (1915-2014), a Japanese American from Portland interred at the Minidoka internment camp in Idaho in World War II.
I really like this painting a lot. Great color and composition. This genre is seeing growing interest in the marketplace. 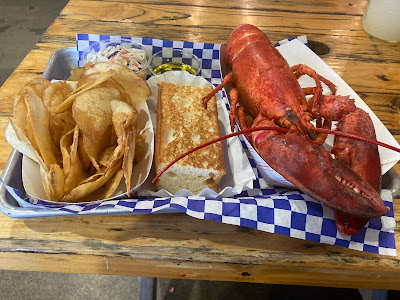 Was not a particularly great week for food. I had a meal with Ken Stern one morning, who drove up from Palm Springs. Sweet potato pancakes and corn beef hash at the Milbrae Waffle House. A lobster dinner on my own at the New England Lobster Company on Cowan. Breakfast with Warmboe at Kristies, my longtime hangout in Burlingame. A shitty and overpriced prime rib at Broadway Prime. Great xiaolong bao and dan dan noodles with Dennis and Kerry.
Paul's son and niece packed me out pretty effortlessly. I stayed at Kerry's and we watched the original Mad Max on his big screen.
I took off back home yesterday morning. It was very grueling. Somehow I had sprained or fractured my left ankle at the show and could barely walk the last few days. Downing mass quantities of ibuprofen, I bought an ankle support and some rub. Couldn't get ice in my no frills accommodations. Feels much better this afternoon.
Anyway, interstate five was shut down in the central valley and I got routed through side roads to Kettleman City. An eight hour return became an eleven hour trek in Los Angeles, Corona and Temecula traffic.
I unloaded this morning and got a voice message from my doctor to boot; Biopsy looks clear and clean, will start maintenance immunotherapy again when I return from New Mexico. Great news, the cat gets to live another day.
Thanks for all your prayers and good wishes. They certainly didn't hurt.
Posted by Blue Heron at 9:22 PM

I am so happy about the biopsy. You couldn’t ask for more. I am still in major pain from the surgery. Amazing how sick this family can get.

I'm delighted with your good news.

Great News good to hear it.

Good news!
Thanks for sharing booth photos. I miss the Hillsbourgh show. Glad to hear that the quality was there.

Great news, and also happy to hear the customers are still appreciating the special objects you feature. There is so much of us in those creations.