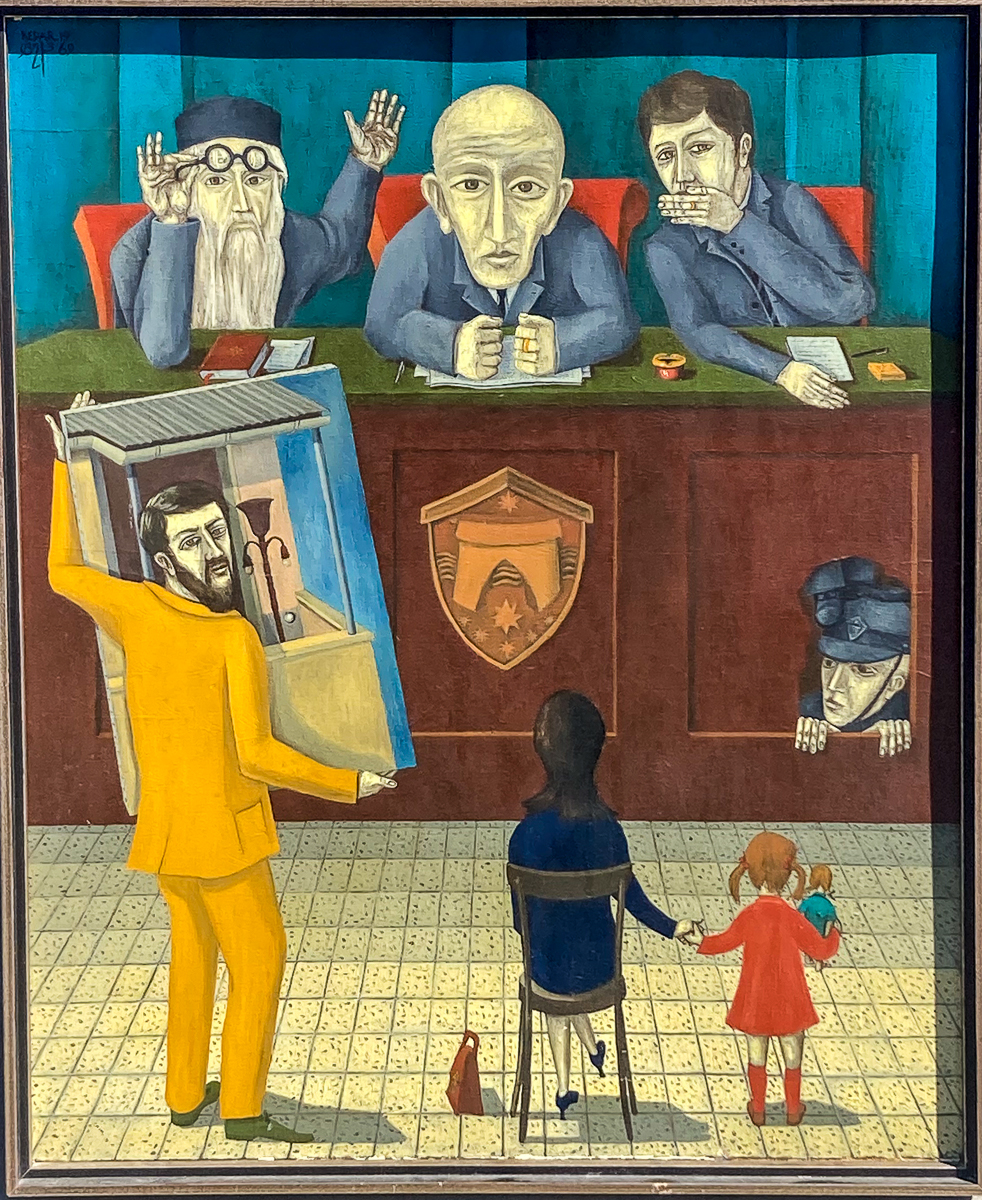 There is a common soliloquy or refrain among art dealers when discussing a painting; it is the particular artist's greatest work. When asked how the dealer can make the statement the answer usually is, because I own it.

So it is funny when I tell you that I believe that this might be the late Israeli artist Dan Kedar's greatest work. Not that I own it, I do not. But my sister does and I am selling it for her. And objectively as possible, I will tell you that I think the Kafkaesque canvas is brilliant. Touches of Bosch too.

I don't know a lot about Dan Kedar (1929-2008) but his work is very surrealistic. I lifted this bio from the a dealer who had himself lifted it from an Israeli Museum site.

I don't know a lot more. He taught theater arts in Ramat Gan, a place where my father once lived and near where he was born. There is an interesting article about him in the Jpost which offered this snippet into his life, Artist Dan Kedar hits his stride:

...He grew up among Tel Aviv's movers and shakers. One of his grandfathers was Moshe Glickson, a chief editor at Ha'aretz, and his kindergarten teacher was Haya Brenner, the widow of influential author Yosef Haim Brenner. After serving in a Palmach brigade in the War of Independence, Kedar established Kibbutz Harel with a bunch of fellow Bezalel students in 1949. A member of the communist-leaning Hashomer Hatzair youth movement, Kedar's identification with communism strengthened as he grew older. In 1950 he read the book that caused him to abandon art for six years. It was by Andrei Zhdanov, the Soviet architect of what came to be known as socialist realism, in which Zhdanov argued that the artist must serve only his society. "I was torn in half," says Kedar. "I believed him with all my heart, but I was brought up on individualistic modern art [by] Picasso, Roualt and Soutine, and here was Zhdanov calling for realism. I couldn't do it, so I decided to stop painting." He did. Only after Krushchev's famous "secret speech" repudiating Stalinism did "I slowly start to paint again," Kedar says. In the meantime, he'd turned to theater. At the Cameri Theater School he studied directing and design, from there moving on to the famous Old Vic school in Bristol, where one of his fellow students and stagehands was future seven-time Oscar nominee Peter O'Toole.

I love my sister's painting, which came from her mother, my father's second wife and was bought by she and my father in Israel sometime after 1969. I guess that my father and I had a similar eye for art.

The title is The Little Idiotic Trial or at least that is what the title was on the bill of sale as it does not seem to have a visible title. Dated 1969 and signed upper left.

A friend and fellow shop keeper just asked me to explain the work to them. Always tricky and dangerous but my best guess is that the man with the painting is Kedar and he feels like he is facing a judgement and inquisition from the moral and judicial authorities over an artistic creation that is in fact something rather innocuous.

But I could be very far off. Who knows? But there is definitely a feeling of he and his family being persecuted by the powers that be and a serious worry about being crushed by the state apparatus. 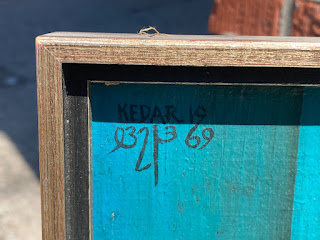 I leave for three shows in New Mexico very soon. I will be offering this work at the Objects of Art Show in Santa Fe, August 13-15 with an opening preview on Friday August 12.
If you are in the neighborhood please drop by and say hello and check out the painting. And visit a wonderful show that I have been exhibiting at since its inception.

If a painting ever conjured up visions this is it. The 3 judges see no evil, speak no evil, hear no evil, the first judge lifting his glasses to get a better look, very interesting painting thank you

The policeman staring out of the hole in the judges’ bench puts a lie to the thought that ‘justice is blind’. I also find it interesting that all three judges’ eyes are shifted from the horizontal plane of the painting. Connect each set of pupils with an extended line and it skews from the angle of the frame. Even the center judge, whose head is otherwise centered. Shifty?

Could the person being accused be the viewer?