First to be confirmed. 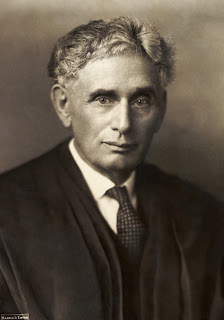 Did you know that Supreme Court Justices never used to be confirmed in public hearings? That all changed when Woodrow Wilson nominated a Jewish justice, Louis D. Brandeis. And the comments made about him sound vaguely familiar.

From Will and the WaPo - The first Jewish justice was also the first to face confirmation hearings.

The Senate quickly convened the first confirmation hearings. Its stated reason was that the 59-year-old lawyer was a controversial liberal who might lack “judicial temperament.” But antisemitism was an uneasy undercurrent in the debate, and Brandeis himself suspected his religion was one of the main causes for skepticism of his appointment.

The trustbusting lawyer had plenty of enemies. Former president William Howard Taft minced no words in attacking Brandeis: “He is a muckraker, an emotionalist for his own purposes, a socialist, prompted by jealousy, a hypocrite … a man of infinite cunning … of great tenacity of purpose, and in my judgment, of much power for evil.”

The Boston Globe described Brandeis as “a radical, a theorist, impractical, with strong socialistic tendencies.” The New York Times warned that he “would be a contentious member of the court.” By contrast, the liberal New York World said that “because he is a radical of unusual ability and character” his “elevation to the bench will be regarded by most people with enthusiastic approval.”

Things never change, do they? By the way, Brandeis is now considered one of our greatest Supreme Court Justices.

The New York Times, which 25 years earlier had warned that he would make a “contentious” justice, called him “one of the great judges of our times” who as a justice “has regarded the Constitution as no iron straitjacket but a garment that must fit each generation.”

The last sentence is the greatest comment on originalism I have ever read.