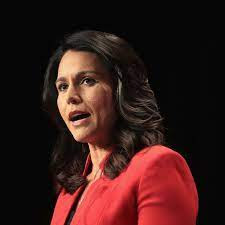 The race to be anointed #1 Vladimir Putin apologist and ass kisser has basically been a three way contest for some time.  And we're not even talking about Trump, lets not beat on that old dead horse.

Oliver Stone had the early lead and helped sow the propaganda for the Ukrainian invasion with his incredibly one sided movie Ukraine on Fire. 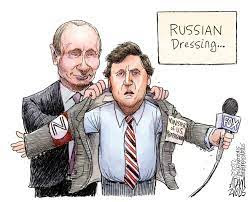 But the coveted spot has really boiled down to two people of late, Tucker Carlson and Tulsi Gabbard. There are reams of articles you can read about Tucker's affinity for the Russian leader, we are not going to go there either, right now. But how is this for pro Kremlin sycophancy?

"They are doing so by waging this modern-day siege against Russia, isolating, containing, destroying their economy, starving the Russian people in the hope that the Russian people or the military will rise up and revolt and overthrow their government, and get rid of Putin."Tulsi Gabbard on the U.S. response to the Ukrainian invasion.

See, the invasion was all our fault. Lets talk about Tulsi, shall we? Because it has been intimated in some circles that she is actually a Kremlin property. They just can't get enough of her on Russian TV. And her money is coming from a very interesting person. Just who is San Mateo's Sharon Tennison and who is funding her?

I started reading about her. Like this article at Forbes, Tulsi Gabbard's biggest political donor is a Putin apologist. Daily Kos has another good article, Russia's most prominent State propagandist apparently agrees that Tulsi Gabbard is a Russian agent.

Now I always thought she was vile, especially when her homophobic tendencies rose to the fore but openly advocating for Russia and allowing her to be used as a propaganda tool is simply too much.

I saw this at Forbes; Tulsi Gabbard latest to push Russian backed conspiracy stories about U.S. backed biological weapons labs in Ukraine. And at the Interccept; Russian TV uses Tulsi and Tucker to sell Putin's war.

There is another interesting article at the Daily Beast, Accused Russian agent gave to one politician, Tulsi Gabbard. But wait, this handler is not Sharon Tennison, this lady is named Elena Branson aka Elena Chernykh. And she was federally indicted last month for lobbying and not being registered as a foreign agent.

And there are more Russian threads encircling Gabbard like Hydra; From Politico - The Russian asset and the warmonger:

Bill Browder, a financier and an activist who has run afoul of Putin, said he thought it is no coincidence that Gabbard recently hired an operative who had worked with a Kremlin-backed lawyer who smeared him because he helped secure the passage of the Magnitsky Act. That law imposed sanctions on Russia in reaction to the death of Sergei Magnitsky, Browder’s lawyer and friend, after whom the law is named.

“Out of all the thousands of people she could have chosen, she happened to choose the one who had first-hand experience working with a Russian agent of Vladimir Putin’s,” Browder said of Gabbard. “I don’t believe in coincidences. It’s less likely to be a coincidence when you look at her policies, which are the same policy as Putin’s: pro-Assad, anti-gay and pro-Trump.”