Hell of a lineup

I've been actively interested in family genealogy since as far back as the seventies and eighties, I guess. Used to go to the National Archives in Laguna and pour through ship manifests, sort through obscure microfilm at the Weisenthal Center, pester relatives who would rather not talk about it, I left no stone unturned (nor any turn unstoned for that matter) in my quest for a little information about the mishpucha.

This was in another era kids, before anybody had ever really heard of the internet. It was much harder then and any small victory was achieved through a hell of a lot of sweat and hard work. I loved the research, frankly.

Later I had my DNA tested, my autosomal and mitochondrial plumbed and my Y chromosome sequenced, the first one in my entire haplogroup to do so. I didn't find a couple cousins, I found over 30k of them, complete with email addresses. Enough already.

Seriously, the quest has been very rewarding. But it could have been much simpler if somebody at the start had said, "Hey kid, guess what? We are all related." Because it is not too far off. We Yids are what is known as an endogamous population and you throw a little Kevin Bacon six degrees of separation in and everybody is related to everybody, I tell you. And honestly I probably shouldn't even mention bacon this close to a major holiday.

I have been a subscriber to a free service called Geni for years but have not done all that much with it. I belong to about six of these genealogical tools. It is a great place to create a family tree if you have or don't have a GedCom file. The other day I decided to upgrade to their GeniPro trial for two weeks. Expensive but cancellable. Boy, did I hit paydirt. Geni gives you both blood and in law relationships, it is quite a valuable tool for researching family history. It fills in a lot of gaps.

Yesterday I discovered that two of my closest and dearest old friends Lena and Ricardo are both closely related to me and each other through my Father's maternal grandmother Chana Grosbard. It was very exciting. Similar news for my friend John Feldman. Another connection to Chana. Click on a red link and see the connection.

Today I decided to take it further. Albert Einstein? No, but yes, the girl he was shtupping. I decided to stick with the physicists, everybody likes to brag about smart relatives. John Van Neumann, the famous Hungarian physicist? Check.

I shared this info with my cousin Keren, who is the true DNA maven in the family and she suggested I try Lev Landau, another famous physicist. Check. One question, how did the cousins get all the brains? What am I, chopped liver? As we all know, life isn't fair.

When I was a kid my parents used to brag about their kinship with the great yiddish writer Sholem Aleichem. They were right. I guess we were related. But funny thing, it was supposed to be through my mother. Her side of the family is strangely absent from my searches, still to this day. Not sure why.

Smarts are one thing but there is nothing like power. I knew from my Y DNA that I was a very close match with Napoleon. This confirmed the familial relation through my sister in law. Cool. Kissinger? Of course. Golda Meir? Yes, through my wife. Barry Goldwater? Was there any doubt? Another Grossbard link. Notorious RBG? You bet.

Well ,who else should I check? I went for music. Bob Dylan? No problem, well at least related to his daughter in law anyway. Jacob, we'll be over for dinner.

People say I remind them of Anthony Bourdain. Wonder why? Bingo. Jeff Goldblum? Sorry, yes, him too. Edward G. Robinson? Ditto. Kirk Douglas? See this hole in my chin? 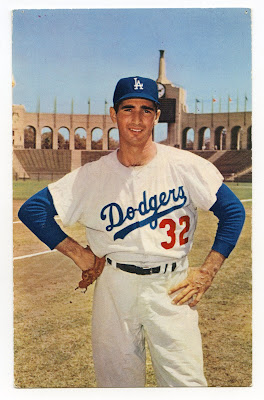 Who did I strike out with? One guy, so far, Lou Reed. Sorry Lou. But I'll take this guy on my team any day, Lenny Bruce. Born Leonard Alfred Schneider. And this lefty, again through my Grossbard line, Sandy Koufax.

Damn, the world is getting smaller every day. And it ain't like I'm anything special. Yossi the Schmeckel, the bum at the racetrack, has all the same connections I do. It is a very large and mostly quite productive family.

Even has a past President of the United States.

Always wondered where I go my brains from. And you say nothing from mom’s side? I always just figured that they lied about everything.

No Lou Reed? Guess you won’t be taking a walk on the wild side……..