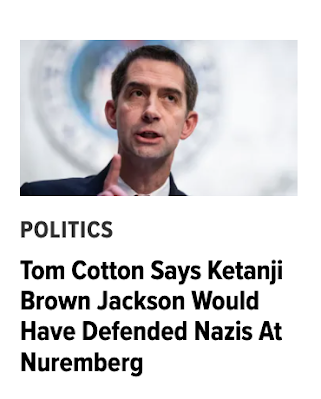 That is what defense attorneys do, Tom, they defend people. That is their job. Because everybody is entitled to a defense under our system of justice. Weren't you a lawyer?

“You know, the last Judge Jackson left the Supreme Court to go to Nuremberg and prosecute the Nazis,” Cotton said, referring to Robert Jackson, who was appointed by President Harry Truman to lead cases against German war criminals. “This Judge Jackson may have gone there to defend them.”

More on the story here.

What a scummy man he is.

Remember Jackson not only 'represented' the scumbags, she joined them in calling the President a war criminal!! It is one thing to explore jurisprudential avenues of defense for your worthless slime clients who were accomplices to 9/11 but to totally invent some silly accusation is putting yourself in a position to get yo ass virtually waterboarded.

I seriously doubt John Adams would have even considered calling the Continental Congress
baby killers and warmongers when he defended the British soldiers in Boston. But then he
was John Adams and not Jackson.

Eldridge Cleaver, as the Beaver