Anybody paying attention to what is happening in this country? In the last couple months, Republican senators have advocated for reversal of the following decisions:

Obergell vs. Hodges. This is the 2015 decision where the Supreme Court decided, in a 5-4 decision, that the 14th Amendment gives same-sex couples the right to marry. Here is John Cornyn on the subject:

Cornyn called it “judicial policymaking,” saying that the word “marriage” does not appear in the Constitution, but that “religious freedom” is mentioned explicitly.  So the party of supposed individual liberty still wants to tell you who you can and can not marry, based on their personal religious beliefs.

Loving vs. Virginia. In 1958, two residents of Virginia, Mildred Jeter, a black woman, and Richard Loving, a white man, were married in the District of Columbia. The Lovings returned to Virginia shortly thereafter. The couple was then charged with violating the state's anti-miscegenation statute, which banned inter-racial marriages. The Lovings were found guilty and sentenced to a year in jail (the trial judge agreed to suspend the sentence if the Lovings would leave Virginia and not return for 25 years).

Senator Mike Braun is on record recently as saying the legality of mixed race marriages should be left to the state. So should slavery, in his mind, I am guessing.

Griswold v. Connecticut, a 1965 Supreme Court decision that a state’s ban on the use of contraceptives violated the right to marital privacy. Now some conservatives are seeking to regulate what married couples decide to do regarding their reproductive plans.

Sen. Marsha Blackburn (R-Tenn.), during her questioning of Jackson, said she opposes Griswold, calling the decision “constitutionally unsound.” So now you are telling married people they can't use contraception? You think the state belongs in our bedroom?

When Amy Coney Barrett was appointed I predicted the end of legal abortion for much of the country and we are seeing it occur before our eyes. But now the states right's argument is being discarded, note states like Missouri that are trying to regulate legal abortion outside their state.

Missouri lawmakers want to stop their residents from having abortions — even if they take place in another state.

The first-of-its-kind proposal would allow private citizens to sue anyone who helps a Missouri resident have an abortion — from the out-of-state physician who performs the procedure to whoever helps transport a person across state lines to a clinic, a major escalation in the national conservative push to restrict access to the procedure.

I saw an interesting statistic the other day, don't remember where. It said that the majority of abortions are performed on women that have already had children, not pliable young teenagers. I assume that they know better than the rest of us if they are capable of having another one and raising it properly.

I highly doubt they need to see pictures of their fetus or hear its heartbeat or listen to a counselor tell them that they are going to go to hell for their wickedness. I trust that they have more knowledge of their particular situation than any of the rest of us.

Of course, conservatives like to virtue shame and tell abortion seekers that they are using abortion as a means of contraception. I have never met a woman who knowingly did that. It has to be incredibly difficult to make the decision. But it is their decision, or it is until the next constitutional brick falls anyway. Never met a woman that wanted one either, come to think of it. More like had to have one. Be careful when thouest judge...

Do you see what is happening to our country? A religious minority has found their way into a position of dictating exactly how the rest of us should live. The so called "originalists" have been shown to be mere partisan sophists trying to get their extreme political agenda enacted. Are you comfortable with that? What is the next freedom that they will seek to curtail?

Conservatives like to blather about unenumerated rights. They need to read the Ninth Amendment.

The enumeration in the Constitution, of certain rights, shall not be construed to deny or disparage others retained by the people.

*
This cartoon raised a bit of a firestorm a few years back. How far off or on the mark is it? Can a majority Catholic Court, appointed by Presidents that did not win the popular vote in three out of the last four elections, fairly represent the entire people, let alone the majority of this country? And does it not seem like they really don't care if they do anyway? 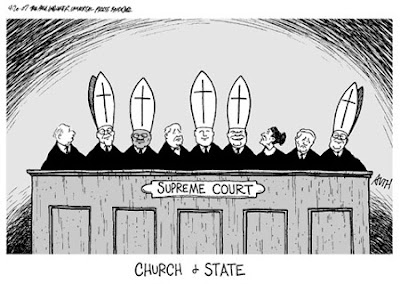 Seems that humankind are just a bunch of fuckwits after all.

Did you go off your meds today?

Robert, you've got my nomination to the Court. Go get 'em.