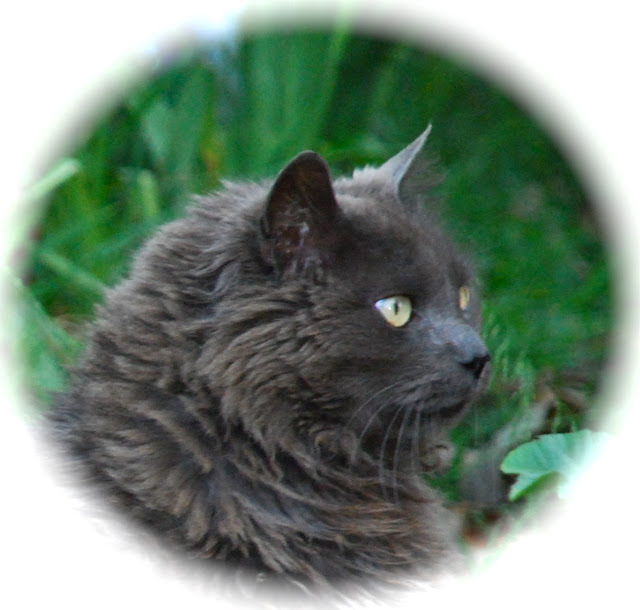 The blog has been nothing short of very depressing lately. And we all know that there is nothing like a little heartache to make the extended misery even more delicious! So to heap coals on the sorrow, today was the day I put my long time pal and long suffering cat Big Guy down.

Big Guy has been my buddy for between 16 and 17 years. I frankly don't remember. Many of my critters and friends have come and gone and he has always been there through it all, bitching and moaning in the background.

We got him from a friend of Shela's in I think, in Solana Beach. I picked him up one evening. He threw up in my car. I think in certain culture's that is deemed very auspicious.

I know that many people will lionize their children, friends and family. They were always the best ever. I had a rather honest relationship with my cat and I am not going to start that crap now. Big Guy was a russian blue but probably from my side of the river. He complained a lot. Especially as he got older. Nothing was ever really to his liking and he let us know frequently.

He was a beta male who never pushed his significant weight around and may have actually been homosexual. We agreed not to discuss it. He was the nondominant partner in many an animal dyad. Big Guy stopped taking care of himself. He got serious dreadlocks. Maybe a problem with kidney function. In the end he lost control of his back end and couldn't ambulate. We have been on vigil. It was time.

It hurts to lose somebody who has been with you through everything.

RIP-
I feel so sorry for you and Leslie. I am in the middle of nursing my dog back from a serious knee surgery and it has been kicking up all sorts of memories of this sort...an animal in need etc...anyway, my heartfelt condolences. Here's to a new year full of good stuff...fuck 2009.

I was charged with taking our beloved cat of 14 years, T.C., to the vet for "the shot", a couple of years ago. My wife was committed that day to helping her elderly mother. That is one of the hardest things I ever had to do! I was holding him in my arms in a towel waiting for the vet. T.C. (short for Tom Cat), meowed plaintively before the vet came in and I told him that it was going to be OK. At the time, I felt like I was lying to him. I knew, however, that it was for the best. It is amazing how attached we become to our pets.

Our condolences to you and Leslie!!!

Hi Robert. Just read your blog. very interesting. I have a daughter who lives in San Diego. Next time down I will stop & see your gallery. Very sorry to hear about Big Guy. I know how you feel. Last year I had to put down my friend "Australian Shepherd" We were pals for fifteen years. One of the hardest things I ever had to do. I'm 80 years old now & I sell things on E-bay to stretch my social security etc. Taint easy nowadays. Good luck with your Gallery & hope to meet you soon. Regards Doug

So very sorry to hear about the Big Guy. That's what I called my boy that we lost in May of 2008.
I'm thankful for you (and him) that he led a good and full life. And I'm sure he was spoiled rotten. You have lost so many of your very best friends this year. All you (two) can do is carry on. Nobody gives us any choices about these things.

My Mom is doing better, she is in Palomar now. She is one step down from ICU. Hopefully, probably within a week or 2, she will be moved to Fallbrook Skilled Nursing Facility to continue with physical therapy. If she continues to do well, maybe she'll be home in a month or so. Then she has chemotherapy. She is an amazingly strong woman.

Hope your Christmas was good. Mine was great, as Mom had improved a whole lot.

And a happy New Year to you both ! I know it's going to be a better one for all of us!

Wishing you and your mom the best. And Ty as well!