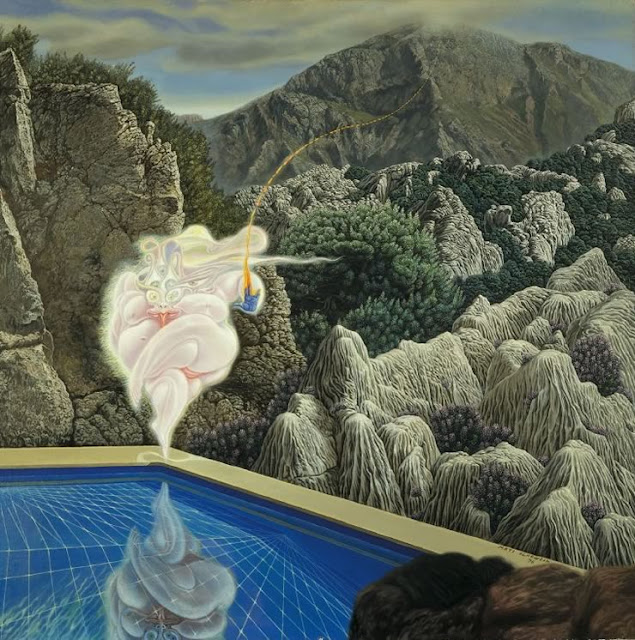 I was looking on line at images by the great visionary artist Mati Klarwein this morning and found this little gem on his site. Klarwein was a student of Ernst Fuchs and a member of what is known as the Vienna School of Fantastic Realism:

Good morning to all you art critics out there!  The days when I used to tremble with apprehension at the sound of your approaching footsteps are over.  I've come to terms with myself, as they say, and I've accepted the role of the worst painter of the world who inspires nothing but ubiquitous silence from you guys for the last 40 years.

But don't get me wrong!  I sympathize with the fragility of your position and reputation, and your quasi-hysterical anxiety as you buttress the sand castle of art with the cement of your aesthetic theories in order to keep it from crumbling.  After all we are talking demand and supply, and megabucks turnover.  All art is commercial and a good artist can do a sublime painting even when it's commissioned by a Mongolian idiot with a gold credit card.  It's just harder and more of challenge, that's all.

Modernism and it's dogmas and anti-dogmas have tried extremely hard but have failed to define the borders of art as commodity, besides having failed to establish art as the art of living, just look at the world around us!  All it has succeeded in doing is to glamorize junk, commercial hype and life-negative virtual realities that poison our organic environment.  Modernism and it's after-shock ism is killing nature and nature strikes back by killing us.  Soon the art market will be dead as gallery's doornail, with the exception of course, of the 50 most power megabuck full giants with their 50 van Goghs stored away in their private tax-exempt foundation-fortresses.  By then I'll be squatting in a cave and finger painting monochromes on the walls with my own blue-shit.  That's when you critics are gonna come running acclaiming me as the great master of our times.  But it'll be too late, I'll be evicted from the cave and chained to the basement in China writing one-liners for a fortune-cookie factory, such as:
perseverance furthers...!

Klarwein is best known for the wonderful cover art he did for Miles Davis' landmark 1969 album Bitches Brew; while i can't disagree with what he's saying, somehow i'm tasting sour grapes here, though; i compare him to Warhol and Peter Max, who also connected with the prevailing cultural zeitgeist, but were able to market themselves successfully.

I don't get sour grapes, more like astute honesty. The difference with your example is that both Max and Warhol were media whores who operated image factories. I met both of them. I think Klarwein was happy being an artist, notwithstanding what anyone else thought.