A cup of Joe 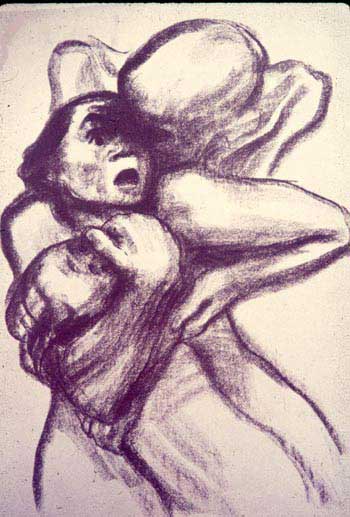 "One may not escape the angel of death, nor say to him, 'Wait until I put my affairs in order,' or 'There is my son, my slave: take him in my stead.' Midrash Rabbah

It was a chance meeting, if chance can be said to ever enter such an equation.  If you want to know, I was at a Yum Yum Doughnuts, something I rarely ever do, so please don't spill to my wife.

I went in for an apple fritter, probably the most deadly offender on the whole top rack, but hey, if you are going to be bad, you might as well go for the gusto. A fried blob of heavy dough, infused with a pound of processed white sugar. And a small cake doughnut too, they're healthy.

The pleasant Korean woman handed me my small coffee and a few bits of change and I successfully managed to squeeze my large torso into the cheap blue plastic chair.

I've noticed that there's a class and age demarcation at some of the restaurants in my town. You will get a healthy mix of your hep, sext and septugenarians at the coffee shop but the eighty year old and up crowd tends to favor Burger King, Denny's and the doughnut shops.

I used to think that it was simply a matter of economics but like the good book says, people just seem to be more comfortable with their own kind. If you can stand the food at Denny's, you can stand tall in the face of life's most pressing challenges. And the oldtimers seem to exist in their own world at these places, unencumbered by the intrusion of those young folks who didn't really fathom what struggle actually is or was. The food was definitely cheaper, in any case.

I don't know why I got such a strong vibe when he walked in the door, his hat pulled down tightly over his brow in such an unfamiliar manner. I know that it would be more poetic to mention that he was wearing a long black coat but honestly it was a taupe windbreaker with some sort of golf logo emblazoned above his breast. I guess that I had the first word, when we were both jostling across the counter with the white sugar, equal, nondairy creamer and the wooden stirrers.

"It doesn't look like we are going to get that rain," I offered, the weather always a safe conversation starter in a rural small town. The stranger craned his neck and peered through the dirty window, squinting up at the depressing sky.

"I don't think I've seen you round town before," I said, with the razor sharp radar of one who has seen the same faces for years beyond count and lived in a town where a new person stands out like a buckskin in a field of chestnuts.

It was my turn to be surprised, not to mention a bit agitated. "How do you know my name?" I stammered with a genuine hint of indignation. "You with the I.R.S.? My ex wife send you for that alimony payment? I should be able to give you something next week," I backpedaled, my forehead breaking into an instant cold sweat.

The man took off his hat and gently placed it on his knee. He leaned forward and wiped his hand across his hair, front to back. He smiled at me.

"No, nothing like that," he said softly and I got the hint of a sweet loving smile and I just felt better all of a sudden. If you can believe that.

He looked at me dead in the eye and said, quietly like, "My name's Mal," proffering a limp and cold hand to shake. "I am the Angel of Death."

Now I'll tell you, I heard the feller say that and my knees got weak, my prostate puckered and that new ring job on my left ventricle started pounding like a timpani.

My life started flashing before my eyes, mostly unfinished business, how the hell would my wife get by, I didn't even have a new roof on the barn, would anybody be able to make any sense of my illegible receipt book?

I took a long deep breath and somehow managed to reclaim my bearings, the hour of one's passing being beyond our mortal ken, and gave this stranger a somewhat more clinical and detailed appraisal.

Sensing my inner conflict and no small sense of doubt as to his angelic veracity, the stranger looked around in both directions to make sure that no one was looking and opened his jacket a few inches. I could definitely see that six sets of wings beautifully intertwined around his torso.

"Relax, Barry," he cautioned in a sonorous and gentle voice. "We aren't punching your ticket today," he intoned in a quiet whisper. I guess I must have visibly unblanched a bit as my blood found its way back to my outer extremities.

"See that fellow over there?" I looked two rows across and saw old man Crawford, reading the morning paper wearing his worn green pendleton.  "Real pity. Odontogenic infection. Going right to his heart. Pow," he said, hitting his fist into his palm for emphasis."Get more guys that way when they stop taking care of their teeth."

"One cruller short of eighty five. Hey Barry, I have to go to work, it was a pleasure speaking with you. I hate to say it but I'll see you." I nodded my head at the inevitable truth in his words and returned the smile. "Until then."

He looked at me one last time and with a wink the ageless seraphim rose regally from the laminated table and glided over to deliver the near invisible fatal tap to old man Crawford's shoulder.

I started walking home and a few minutes later heard the expected wail of the ambulance siren behind me, never bothering to even turn around. It was just my lucky day and someone else's number got called.  That's it. Always been lucky, I guess.