Prison house of its garments 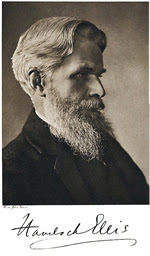 I am sure that at least some of you have heard the name Havelock Ellis (1859-1939). He was a father of modern psychiatry, preceded Freud in exploring some key concepts. A doctor, he also did seminal research on human sexuality.

He was also a racist to some degree, like Churchill and Kipling and many other British men of his generation as well as a proponent of eugenics.

With the proviso that nobody is perfect, Ellis is really an interesting writer. He was one of the first westerners in the modern era to experiment with mescaline, eating peyote in an 1986 1896 self experiment.

I was at my friend's house the other day and pulled out a volume of the three volume 1924 Ellis tome Impressions and comments from his late father's library.

I did a zen blind opening and landed on this paragraph on page 25.


In an age when savagery has passed and civilization has not arrived, it is only by stealth, at rare moments, that the human form may emerge from the prison house of its garments, it is only from afar that the radiance of its beauty—if beauty is still left to it—may faintly flash before us.
Among pseudo-Christian barbarians, as Heine described them, the Olympian deities still wander homelessly, scarce emerging from beneath obscure disguises, and half ashamed of their own divinity.

"He was one of the first westerners in the modern era to experiment with mescaline, eating peyote in a 1986 self experiment." Hee, hee, hee...we got him beat him by a decade at least bro! 8>)

Sounds like he was a member of the Order of the Golden Dawn like many of his hoity toity British peers. Back then Western Esotericism was a fashionable activity for the elite.

I read some Golden Dawn stuff when I was a kid, principally the work of Paul Foster Case. Never had this kind of lyrical power.