To burn or not to burn, that is the question? 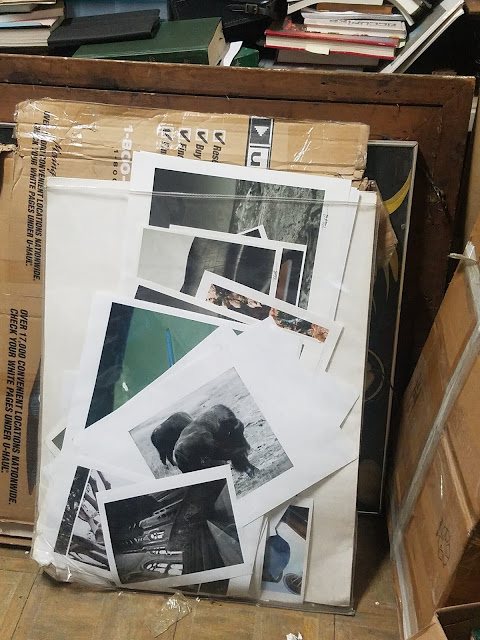 I am trying to slowly tidy up my office (don't laugh) and I keep bumping into this large valise of old photographs.

Some good, some not so good, they represent a good portion of my arc as a photographer.

I can't afford reframing so I pop old shots out and stick new ones in when I have a show, which in itself is expensive with the cost of matting.

Anyway the question is; what to do? Keep, give away or throw in the trash?

With 8 terrabyte hard drives supposedly keeping one's work extant for perpetuity or at least until the next hard drive failure, is the notion of tangible media now antiquated and a thing of the past? 7152 written posts including all my short stories with no back up. Sayonara?

Many artists have burnt their work, Baldessari and my late friend Rick Griffin being two of them. Kafka, Nabokov, Monet, Beardsley, Francis Bacon, the list is long indeed. And laudable in a strange way. I can't forget something Jerry Garcia said in a Rolling Stone interview in 1993, his wish for his artistic memory to slowly fade into dust.

I'm not putting my work at these guy's level, most of it is admittedly shit. The question is, is it worth keeping?

*anybody need a souvenir?
Posted by Blue Heron at 12:24 PM

If a print is really good I will mat it and keep it in a frame or a file. Otherwise I don't worry so much about the prints as long as I have the original file or film AND some idea of how in the hell I made the print. With digital, I usually make a file with PRINT in the name so I can just print the thing with minor adjustments to adjust for ink variations, humidity, the will of God, etc. The nice thing about doing photography is that films and digital files are pretty compact. As i mentioned I do print the fine stuff (what little there is) as printing is potentially the most reliable means of archiving, since one electrical sneeze and a million Giggafluies of data vanishes forever. The biggest advantage for me in this is that I ain't Ansel Adams, so there isn't really that much to archive.

Let your friends go through the pile and let them take what they want. That would be a generous thing to do. Burn the rest in some ceremonial way

Good idea. And rest assured, my former fireman friend, that I will obey all necessary burn requirements.