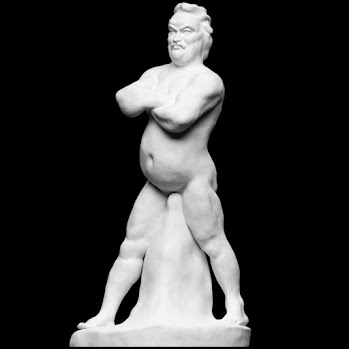 I have had a real itch of late to revisit the work of the great French writer Honoré de Balzac (1799-1850.) Honestly, I have barely scratched his prodigious literary output.
Addressed as Honore only by his close family, his friends preferred to call the temperamental novelist by the simple sobriquet of "Harry."

I mentioned this to my wife this morning and she noted that the esteemed scribe always threw a new wrinkle in but that his works hung rather low in comparison to his more accomplished peers.

Well, zoot alures! I say that Honore's books took courage and testicular fortitude and the critics be damned!

It has often been mentioned that the novelist was a real shvantz but tell me, what genius is ever recognized in his own lifetime? He was a man smart enough to put both his eggs in one basket and to s’occuper de ses oignons (take care of his own onions.)

Next time you reach down and take matters in hand, mon freres, doff your chapeau to this well rounded icon. It takes just such a man to plant civilization's seed. I know this isn't the right place to comment on it but to me that "25 Second Yosemite Valley" photo is one of your best shots. Excellent-plus.

"When I turn off the lights, I've got to hand it to me." - Jackson Browne

Thank you Kerry, Orion always a favorite of mine.

Thank you for your academic contribution, Ralph.

By the way, our Harry actually changed his name to Balsack. From Wiki:

Honoré de Balzac was born into a family which aspired to achieve respectability through its industry and efforts. His father, born Bernard-François Balssa,was one of eleven children from an artisan family in Tarn, a region in the south of France. In 1760 he set off for Paris with only a Louis coin in his pocket, intent on improving his social standing; by 1776 he had become Secretary to the King's Council and a Freemason (he had also changed his name to the more noble sounding "Balzac", his son later adding—without official recognition—the nobiliary particle: "de").After the Reign of Terror (1793–94), François Balzac was despatched to Tours to coordinate supplies for the Army.