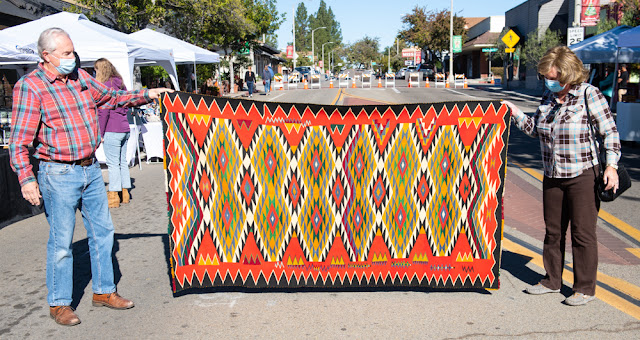 As you know, I rarely put shop material on the blog. I had wanted to post some of the more remarkable things I have purchased in the last couple months but never got around to it.

I usually get a few craven comments that accuse me of selling out by merchandising my wares on the website but my work is part of my life and that is just too bad if it gets under your craw. God forbid I should make a living. The overwhelming number of you like seeing good material and find it interesting from a historical perspective. 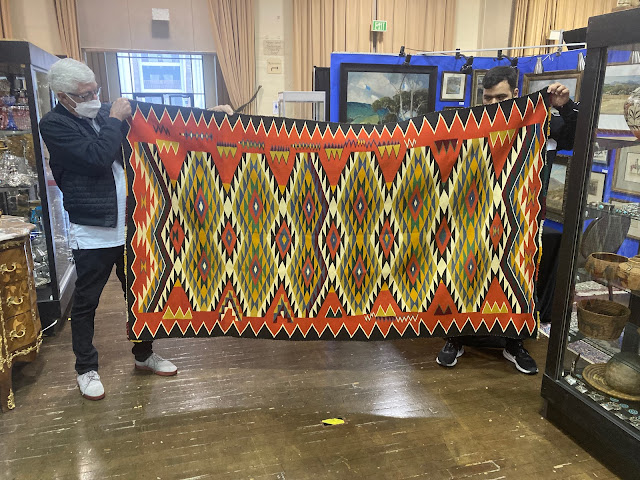 This is a very fine circa 1890 - 1900 Navajo blanket. It is called a germantown because the commercial wool which which it was woven was originally spun in a suburb of Philadelphia, PA named Germantown.

Germantown weavings were originally three ply when the yarn import started around 1865 but were four ply by this somewhat later period. The story is that the yarn was introduced by the government to placate them after the trail of tears, also known as the long walk.

During the long walk, over 10,000 Navajo and Mescalero Apaches were forced to a desolate internment camp called Bosque Redondo in eastern New Mexico. They were held captive by the U.S. Army. Over one third of them perished in the bleak environment from hunger, disease and exposure.

The knot count is significantly higher and so the weaving is much finer and tighter than traditional homespun wool. These blankets were costly and took a long time to weave. They were ultimately supplanted by the natives for much cheaper commercially woven trade blankets, woven in U.S. mills like Pendleton, Racine, Oregon City and Capps, which also shared their strong and bold, vivid color motifs.

These older Germantown blankets are prized by collectors and are called eyedazzlers because of the remarkable color patterns that were possible with the new yarn and color combinations. This one measures 90" x 51".

I have sold these weavings to museums in the past and always appreciate finding a good one. This one, which is held by Bob and Lois in the top picture, is remarkable and in great, near perfect shape. The picture is slightly overexposed, I probably should take a better one or reprocess it. Hope that you enjoy it. And for those of you scoring at home, the weaving is on hold and should be gone by this afternoon.

Stunning Germantown. you have such an incredible eye!

I think the Long Walk afflicted the Navajo. The Trail of Tears was even worse and afflicted the Cherokee and other of the Five Civilized Tribes as they were moved from the Alabama area to the Oklahoma area. Either way these were cataclysmic situations.

The Navajo also refer to the long walk as the trail of tears.

Not my colors but would love to handle it and feel the weave. Great piece.