Shoe is now on the other foot 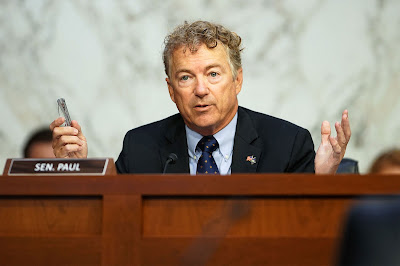 Senator Rand Paul wants federal aid for tornado ravaged Kentucky. No problem, that is what we do in America after disasters, we help each other.
But Paul didn't want to help New York after Hurricane Sandy or Puerto Rico after Hurricane Maria. Now isn't it rich that he is suddenly asking for federal aid for his home state?
If I was a fellow Senator and it didn't hurt the good people of Kentucky, I would be so tempted to dish him up a big serving of the tough love he so loves to dole out.

In 2011, Paul’s first year in the Senate, he was among 38 Republicans voting against a major FEMA funding package despite the fact -- not lost upon publicintegrity.org -- that his own state of Kentucky had been the nation’s largest recipient of FEMA funding ($293 million), mostly because of a 2009 ice storm.

In 2013, Paul was one of 31 Republican senators who voted against a $50.5 billion relief aid package for Hurricane Sandy -- “after previously okaying disaster aid for their home states,” as reported by ThinkProgress.org.

In 2017, Paul was one of just 17 senators to oppose an emergency $15.3 billion federal relief bill for victims of Hurricane Harvey. It had wreaked havoc similar to Friday’s tornado, but not in Kentucky.

Paul didn't want to raise the federal debt to help his fellow countrymen and demanded offsets in some other government programs before funding these and all other disaster programs in the last ten years.

"They say we are out of money to pay for hurricane relief. So instead of finding that money somewhere else in the budget, they simply want to raise the limit on our credit card," he wrote. "This has to stop. We spend too much. We owe too much. We cannot keep spending money we do not have."

Funny, he doesn't have a problem with getting that money now, offsets be damned. The grinch wants a hand out.

Hypocritical politicians are always a good laugh. The man is completely devoid of ethics and intellectual integrity. More on the story here.

Mr. Paul, much like his daddy, is a one man asylum. Apparently they like that in Kentucky since he got elected. To boot, the viewpoint he represents seems to have the real political momentum. I would really like to be wrong, but I think we are sliding into an era of dominance by these guys. It feels like climate warming in the way we make all this noise and fight but the actual results keep accruing to the right. It has been a long process and it sorta looks like the right has been disciplined and consistent and they keep scoring better. From my view having a clown show in Washington beats frank overt Fascism so I keep that in mind. We might just escape the full descent into Fascism and that is my main hope.

The big difference, lost on you poor folks with actual functioning brains, is this:
New York & Puerto Rico, among others deserve no help because they were struck by hurricanes, which are of foreign origin. Kentucky, on the other hand, was smitten by good, old, home-grown, all-American tornadoes. Really - could it be any plainer?

Thomas Massie is just as bad.https://www.dailykos.com/stories/2021/12/13/2069028/-Rand-Paul-and-Thomas-Massie-are-reliable-votes-against-disaster-aid-Except-when-Kentucky-s-in-need

Anonymous - it wouldn't surprise me at all if your sarcastic observation was Rand Paul's exact rationale.