I got this message and photograph from Drew the other day: 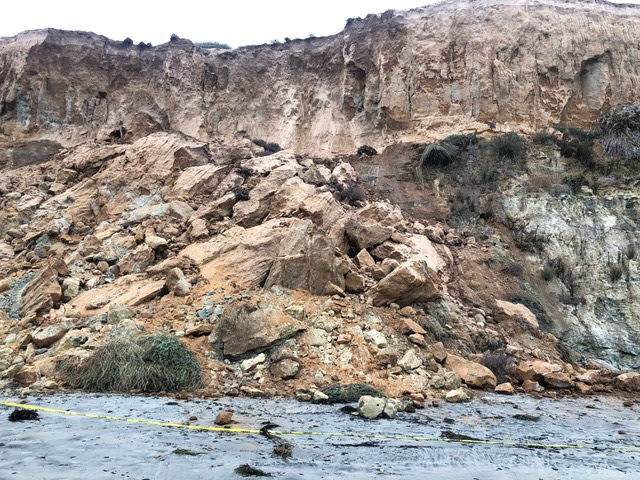 Here is a photo I took shortly after the biggest collapse along the Del Mar south bluff, below 4th Street, about eight months ago….sad that these collapses have accelerated in these past three years, and yet NCTD is doing an end run to steal our access to the bluff by fencing all along this magnificent pristine bluff, cutting off all access across the tracks, for thousands of surfers & tourists every week, not to mention those of us who live for the breeze in our face as we walk this 1.7 mile bluff trail everyday.  This may ultimately be what sends me packin’……  sorry, hard not to be nostalgic this time….

This follows a letter from Drew's wife Nitza about a month ago asking me to sign this petition at change.org.

PLEASE take the 10 seconds required to sign this petition to the California Coastal Commission in opposition to NCTD’s intent to erect a mile & half length of chain link fencing on the Del Mar bluffs.

I commiserate with the people who are potentially getting fenced out. I was fenced out of riding and hiking trails I had used for twenty years by San Diego State in the 1990's. It sucks. But I also empathize with the rail people and the NCTD and can imagine their lawyers worry about liability and bluff collapse. People are always running around looking for people to sue after a collapse and fatality.

I didn't sign the change petition because I could not fairly evaluate or understand the two arguments. I didn't have time to do the research for and against. And one comment at the petition site sort of got under my craw.

Sorry Hadil, I don't agree. Coastal erosion is not a fixable problem or should I say rarely more than a costly, temporary fix.

According to early Post Office records and survey maps, at one time Encinitas had at least two more complete streets that are now lost to the Pacific Ocean, with parts of what I count as at least six additional cross streets.
I colored the old survey map so you can see the area lost to time. Scientists estimate that approximately 600 tangential linear feet of soil and land mass was lost there in the 1880's due to erosion and major flooding. I am sure that things are not very different a few miles south in Del Mar.
Perhaps they should stick to clocks, cheese and chocolate. No Swiss engineer in the world can fix that. Seawalls and mitigation are a joke against the scale of the forces at work here and often lead to an environmental disaster.
People that build on bluffs are deluding themselves as are people that site railroads and highways on top of them. Not sure what we should do now but we need to use our heads and not throw good money after bad.
Posted by Blue Heron at 11:02 AM

Well, based on an article I read about Holland, we might build floating houses. They could bob around outside the surf line and watch Encinitas shrink.