Sakineh Mohammadie Ashtiani and other news from the caliphate. 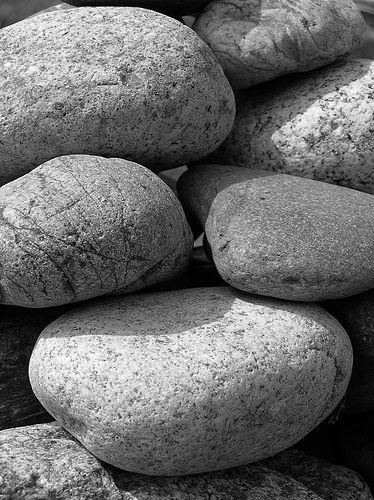 Article 102 - men will be buried up to their waists and women up to their breasts for the purpose of execution by stoning. The stones used should "not be large enough to kill the person by one or two strikes; nor should they be so small that they could not be defined as stones".


The purpose of the stoning is to inflict pain in a process leading to slow death. Victims must not be killed instantly.


Sakineh Mohammadie Ashtiani is about to be stoned to death in Iran. This is despite the fact that she was acquitted on charges of murdering her husband and has already suffered a punishment of 99 lashes. The judge used his "judge's knowledge" loophole that allows for subjective judicial rulings where no conclusive evidence is present. This sealed Ashtiani's fate.


Never mind that she only speaks Turkish and that the trial was held in the Farsi language. Forget that the 42 year old mother of two has already been incarcerated for five years.

"they'll stone you just like they said they would..." Bobby D.


Human Rights Watch released a new report on forced female circumcision in Iraqi Kurdistan. Girls as young as three years old are forced to have their clitoris and other genitalia removed. The Association for Crisis Assistance and Development Cooperation (WADI) reports the incidence rate in February 2010: 72.7% of the 1,408 women interviewed across the region reported they had been subjected to genital cutting. In some districts, the average was more than 80%.


This is a common practice in Yemen, in Egypt and in communities throughout the middle east and africa. Women's sexuality is repressed and they are forever denied sexual pleasure.


Afshan Azad, one of the stars of the Harry Potter movies, has been threatened and reputedly attacked by her father and brother for having the temerity to date a Hindu man. Azad, who played Padma Patil in the popular movies, is a British Muslim of Bangladeshi origin.


Another website dealing with the gruesome subject of honor killings, which are rife throughout the middle east, Palestine and India. Unfortunately, our islamic guests have imported this custom to the USA, Canada and all of their other gracious "host countries." Read this story about a poor turkish girl buried alive for talking to boys.


Norwegians are the targets of a new Al Qaeda attack plan.  Scandinavia has been most open and accepting in allowing immigration from the Islamic countries and their tolerance is now being repaid with terror. This scenario repeats itself in the United States, Denmark, France, England, Holland and pretty much anywhere else in the world.


CNN has fired longtime Mideast Editor Octavia Nasr after her sympathetic tweet following the death of Hezbollah cleric  Sayyed Mohammed Hussein Fadlallah a man designated by the U.S. Department of Treasury as a "specially designated terrorist, [who] disseminated numerous fatwa' supporting terrorist operations and was a vocal supporter of terrorism against Israeli targets." She later said that she saw him as a champion of women's rights and praised his non dogmatic approach.


There has been the normal gruesome run of bombings in Baghdad this week. Over 70 deaths in the last three days, mostly taking out Shiite pilgrims. The civil war is just waiting to happen, lets get the hell out and see where the chips fall. It's not worth risking American lives for these people who will never grow out of their hatred for each other.


The friendly folks in Iran are having a modesty and veils festival on July 12th, which will include a new catalogue of government approved hairstyles. The always popular Iranian pompadour is out as are ponytails, shaped eyebrows, mullets and spikes.


The "Islamic" haircuts were unveiled at the Hijab and Chastity Festival, a fashion event designed to show how the country's youth can be stylish yet not run afoul of the fashion police. "Hair styles have been designed based on the shape of the neck, beard, the size of the chin and provincial cultures," said Jaleh Khodayar, the secretary of the festival.


Beards are no longer required. Presumably there will be fashionistas on hand supplying tips on getting that swarthy, oily, three day bearded suicide bomber look that everybody is striving for these days.


Iranian women are also feeling the heat of the fashion police. Police this summer, for the first time, are now equipped with cameras to film 'immodestly-attired' women, with the footage to be used as irrefutable evidence in court. This can include showing a bit of ankle or pushing your veil back too far.  There are also new rules instituted to ban the keeping of dogs, an unclean practice that tries to imitate the corrupt western world. Although you can still eat them in many of these countries. 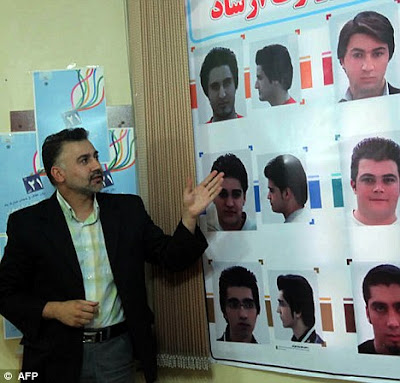 
The Muslim world is also not real keen on gays. Here is a fatwa/statement released regarding the gay Islamic group Al Fatiha -


"The very existence of Al-Fatiha is illegitimate and the members of this organisation are apostates. Never will such an organisation be tolerated in Islam and never will the disease that it calls for be affiliated with a true Islamic society or individual. The Islamic ruling for such acts is death. It is a duty of the Muslims to prevent such evil conceptions being voiced in the public or private arena."


I am tempted to blame the zionists for all of this perfidy and intolerance in the arab world, the widespread killing of innocents, but my innate cynicism gives me suspicion that the islamic creed itself bears at least a scintilla of responsibility in the matter. Although I am assured that Islam is a religion of peace. I read recently that British women are converting to Islam in record numbers, in fact conversion is skyrocketing all over the world. Lets hope that our islamic friends can decide on a sect to run the show before the global caliphate is installed. It will be much less messy that way.
Posted by Blue Heron at 11:30 AM

Robt.
Nothing to do with article, but nice Blue Heron header.

Thanks man, took it on the way up to Lost Wages this week. My November show is going to be an old neon show. As an old sign painter I am just into old fonts and the continuing entropic deterioration of our cultural heritage. By the way I have another photography show out of the blue at the Salon Gallery this month in Fallbrook. Some of my large format car mascot stuff.

you raise interesting points, but I find it difficult to accept that it has to do with anything specific to the middle east or to the muslin faith...or any faith..cotton, wool....sorry...seriously though. I never trusted religious thought....if there were more ultra right Jews they would be acting just as stupid. The world is full of fanatics. Religion attracts a certain mindset...as well as a whole lot of others who are just looking for a relaxing sermon on the mount. Never had the need and respect the need others have till they start getting squirmy on me...telling me how much milk I can put in my coffee etc...and in fact, at present have only a strong belief in DOG.

But there are a shitload of religions out there that aren't engaging in this behavior. Just close your eyes and pretend to turn on the radio. You hear the words terrorist bombing or suicide bomb, don't you instantly think of buddhists or episcopalians? Me neither.

I find all religions bat-shit crazy. Some having more bat shit than others.

Stan, I know that you think that there is some law of moral human equivalence, that all of the species is equally venal but I just don't see it. The tamils and basques have engaged in some pretty nasty terrorist activities and there are some terrorist acts perpetrated by states.Burma, China, the US when it tortures people. But I cant think of any other religious adherent that exults in the killing of absolute innocents.INteresting to hear the Munich PLO architect who died last week express no remorse, considering any jew or Israeli fair game. Remember the Achille Lauro. It crosses a level of barbarity. In my opinion.

It's a sad state of the world when women are 'converting' to Islam. What is it? Some form of societal Stockholm Syndrome?

The sooner women free themselves from the chains of the sky gods, the better.

Apparently, Iran is blinking in the face of world condemnation on this one. Now they will just hang her.