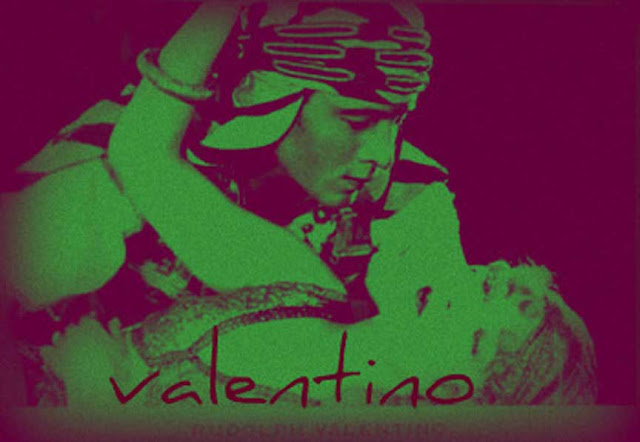 One of the great treats of our vacation was eating at the wonderful Valentino. This was our third or fourth time at Pierre Selvaggio's fantastic restaurant and it is always a delight.

We walked through the Venetian Hotel, sister hotel to the Palazzo, where we spent the holiday and arrived at Valentino. You have a choice between eating at the less expensive Grill at Valentino or the namesake  restaurant, that has alternate locations in both Santa Monica and Houston.

I think that by now that you know that I am serious about food. I may not know how to cook it, or allow myself to be seduced by some of the avante garde culinary crazes, but I know what I like. When I tell you that we had one of the better meals of our life last night, please understand that it is not mere hyperbole.

We were seated in a pretty barren dining room and quickly met our outstanding server, Andy. Andy was a Detroiter with a very pleasant attitude and an apparent zest for both life and good wine. Quickly we were served cold water and three types of bread, a raisin nut, ciabotta and a crusty wheat with warm pats of butter.

My meal began with a caprese salad made with an aged basalmic vinegar, fine olive oil, beautiful buffalo mozzarella and heirloom tomatoes. A bit slim on the basil but the taste was terrific, the tomatoes exceptional. It was served with a hawaiian red sea salt, but not quite enough. They gladly brought us a whole dish of the salt for the night when we requested it.

I started on my first hearty dish, a wild boar ragout over garganelli pasta, a square pasta that is rolled into a tube. It was delicious and filling but half way through I had the scary thought that I was pretty much stuffed and my entree hadn't even arrived.

Leslie got a piping hot ramekin of quail with fava beans and cannellini. This was a confit wrapped in bacon and was thick, rich and sublime. Leslie said that it melted in her mouth it was so succulent. We were doing some serious bite trading at this point.

I was drinking a Super Tuscan from Insoglio, Campo di Chingali. Thick and flavorful, a satisfying wine with a nice finish. Leslie was now paired with the Row 11 Pinot Noir which was light and delicious. Valentino has one of the greatest wine lists in America and they had two of our favorite Pinots on the list,  DuNah and Papapietro. There were bottles on the list for 28 thousand dollars, freaking insane but who asked me?

Leslie had her next course served, a mint pappardelle with heirloom tomato sauce. She said that it was really refreshing, a perfect summer pasta. This was served with a Dr. Loosen Mosel Riesling, Leslie's favorite wine of the night.

A few years ago, a couple we know asked for a Las Vegas recommendation and we offered Valentino. For some reason, they hated it. They didn't think it was nearly as good as the Santa Monica location. Now it is totally subjective and I may not have the most educated palette in the world but I still think they must have been there on a very rare bad night. In my way of thinking it rivals some of the great New York restaurants we have been lucky enough to visit and is head and shoulders above the Batali, Keller, Lutece, Emeril and other dining establishments we have tried at the Venetian. We loved it.

The food came in waves all night and my entree came rolling to the table like Hannibal marching through the Alps, a twelve ounce roasted veal chop with a truffle demiglaze and accompanying porcini mushroom and arugula salad. The shaved parmasan was cut so thin it was actually transparent. I had the chop cooked a little rarer than they recommended. I think I  prefer it grilled. I missed some of the caramelization I favor that you get from grilling. But it was still outstanding. At this point I was about to burst. I had forgotten that the last time we were there we got ridiculously stuffed on the tasting menu and this occasion was no different. Should have skipped the bread and not had two yang winter entrees. I ended up taking a good portion of the chop back to my hotel room for breakfast.

Leslie had started on her wagyu flatiron steak with spicy polenta, sauteed mustard greens and portobello mushrooms. The spicy polenta packed a flavor punch! Her steak was outstanding. She had a Mt. Veeder cab, which I thought was the worst wine of the night having a dull chalky midrange and no start and finish.

We finished the night with a hand selected cheese course of San Simon, a smoked cows milk cheese from Galicia, the Pecorino fresco, a sheep's milk from Tuscany and a Carciotta truffiata, another sheeps milk cheese from tuscany filled with truffles. Leslie quaffed two more wine selections, a Tenuta Guido Alberto and a Pal Sun, a strong port like essence from Valpolicella.

Dessert was a chocolate layered Bailey's cream cake with coffee gelato and spun sugar. Wow. The bill was not exactly cheap but now that we get one or two holidays a year together, you need to let it go once in a while and enjoy life. Leslie and Robert, going for the gusto together since 1991.

I made a pile at the tables at the end of the meal, not going to bed until 2, and then proceeded to give it all back this morning. But the great meal and the mind blowing performance of Cirque du Soleil's La Reve made the weekend a fantastic success. And I even managed to finish reading my book relaxing by the pool. Hope that you all had a nice holiday as well.
Posted by Blue Heron at 7:41 PM

you were right in going to Vegas after all, the weather here has been really crappy, several days in a row of June gloom...

Enjoyed your postings as usual, just read the vacation story. The foodie in me enjoyed the rapturous dinner description. We had an unexpected vacation for Plaa with little budget so
we got on the ferry and spent a few days exploring the local province we are an international outpost within. Sort of like you leaving Del Mar to check out Pine Valley ;)
We had a good time and enjoyed the restaurants we found. I really love the food of this part of Thailand.

All the best wishes for Buzz, take good care.
ricardo