The Log Cabin Republicans, a conservative gay group, came out with a statement earlier this week trumpeting their support for President Trump.

Last week, the Log Cabin Republicans endorsed Donald Trump for president in a Washington Post op-ed. In the essay, the chairman and vice chairwoman of the advocacy group for LGBTQ Republicans credited Trump with “removing gay rights as a wedge issue from the old Republican playbook” and “taking bold actions that benefit the LGBTQ community,” such as launching a campaign to oppose the criminalization of homosexuality abroad.

Such a strange payback. Yesterday the Justice Department filed a brief with the Supreme Court arguing that employers should be allowed to discriminate against, or even fire, their lesbian, gay and bisexual employees simply due to their sexual orientation.


At issue is Title VII of the Civil Rights Act of 1964, which makes it a crime for employers "to fail or refuse to hire" or otherwise discriminate against a prospective or actual employee "because of such individual's... sex."

Talk about self loathing. I fail to see how any gay person could ever justify supporting this administration when it blatantly acts against their self interest like it did yesterday.


Just last week, the Justice Department filed a similar brief in a different case dealing with anti-transgender discrimination, arguing along the same lines that federal civil rights law does not protect transgender employees from losing their jobs.
Remarkably, the department argued in its memorandum that the reason anti-gay discrimination is not unlawful under the ban on sex-based discrimination is because, in cases of adverse treatment by an employer, both gay men and gay women would be addressed equally poorly.
Upon experiencing discrimination from an employer, both men and women in same-sex relationships "would be similarly situated — and they would be treated the same," the department argued, negating a claim under Title VII's sex-based protections. 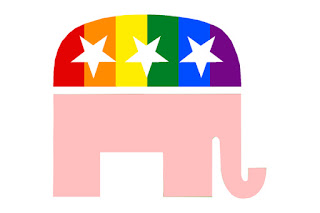 This month alone, the Trump administration has pushed to allow federal contractors to discriminate against LGBTQ people, to remove healthcare discrimination protections for transgender people, and told the Supreme court to make it legal nationwide to fire or refuse to hire trans people.

The actions of the Trump administration here are downright evil, antithetical to any notion of fairness and morality, whatever sophistry and justifications they may have at the ready.  In pandering to their anti-gay base they are jeopardizing the employment and well being of a lot of American citizens. For a gay person to join these guys would be like me joining Jews for Hitler. The Log Cabin group should be ashamed of themselves.
Posted by Blue Heron at 10:25 AM

I love legal reasoning. If you discriminate equally against male and female gays you aren't discriminating at all because males and females get the same rejection. An interesting and creative logical shell game. I imagine that one of the lower intelligence aides to Trump may propose that if the above trick works then perhaps this one will too: If gays lesbians blacks and hispanics are also all discriminated against equally then that won't be descrimination either as if through some Judeo-Christian magic one cancels out the other. My head aches.

Log Cabin Republicans. Off from your plantation. Better round 'em and teach 'em a lesson real good. Because you know better for them, don't you?

Yes, I guess I do. Thanks for being so highly perceptive.

Anonymous, I would be willing to bet that you are the same guy (yes I think you a male) who I have had to mass delete because you won't play by the rules which are; sign your post. You sound like an angry person and I think that you are oft bothered by my content. Why not go elsewhere, find kindred souls who share your pov and save yourself and me the aggravation? You are basically a troll and the general rule is: don't feed them. Be a man, out yourself and take responsibility for what you say, like the rest of us do, don't be such a pussy. Twelve years writing, I've never had to deal with an asshole like you.

You have been deleted again. Why bother?