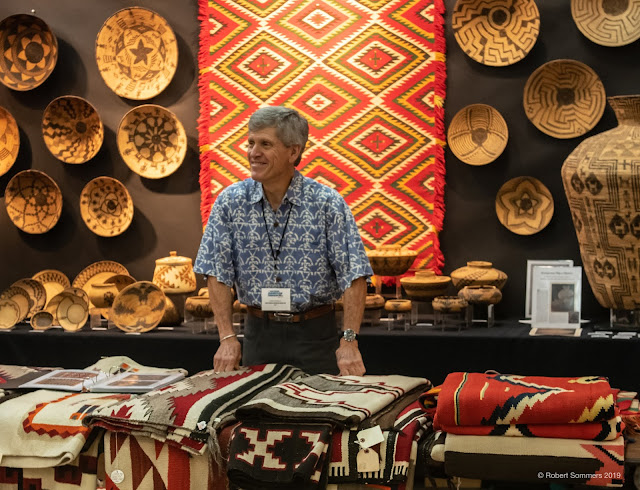 Terry DeWald is arguably the top Indian basket dealer in the world and a heck of a nice guy to boot. He has always been an easy and exemplary guy to deal with.

The ex professional baseball player is lucky enough to live near the marvelous Sabino Canyon near Tucson, a part of the Coronado National Forest. Sabino Canyon is famous for having near year round water that brings in a lot of large mammals.

He sent a story and some great pictures over from his backyard. 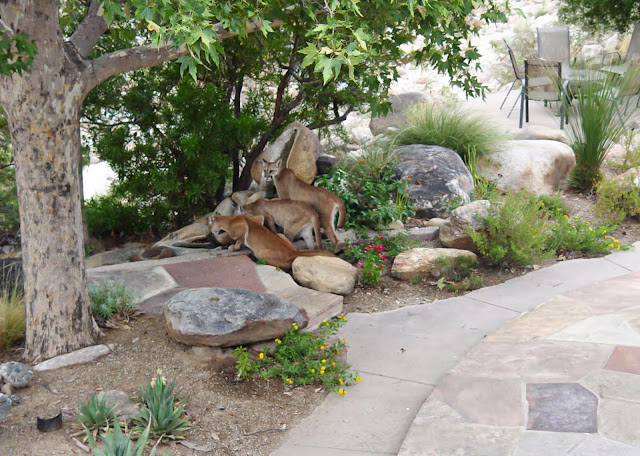 Each morning upon awakening I like to go out on our upstairs deck adjoining our bedroom to check out the new day.  Since the creek is presently dry I first check out our fountain, which is a small 3 metate waterfall coming  from the overflow of our artesian well.  When I turned to look at it…..I did a double take….then slowly walked backwards inside and sprinted downstairs to get my good camera, telling Peggy not to go outside until I darted back upstairs.  Then we both slowly crept out on the deck and I started taking these photos.  It looked like the classic shot you would see in Tanzania of lions drinking at a waterhole.  They were extremely thirsty.  I don’t know how long they had been drinking before I first opened the door but as we stood there they drank consistently for the next 45 to 60 seconds until one peeled away, but the other two kept on drinking for another  minute or more.  Maybe they are Irish cougars.  Upon showing these shots to Josh Taiz, the wildlife biologist at Sabino Visitor Center/Coronado National Forest, he concurred that the cat on the left was the mother and the other two were her two twins likely about a year and a half old.  If you look carefully at the first two shots you can see small dimple spots on their twins’ coats attesting to their youth; as compared to the darker and more consistent chestnut coat of the mature mother. 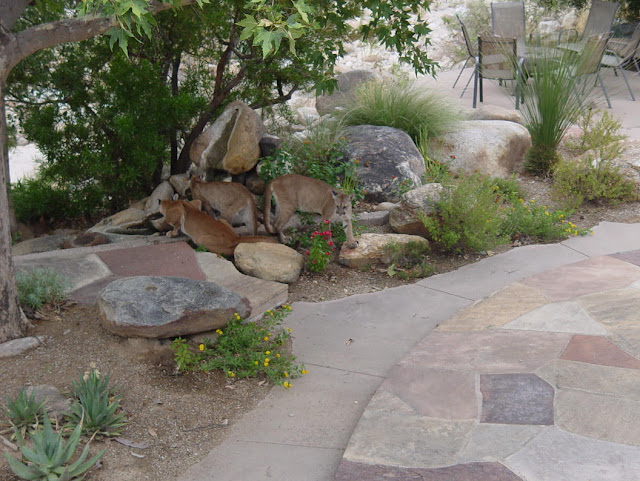 We could not believe they didn’t notice us. They were  perfectly lined up there, like at the drive thru at an In-N-Out Burger with the one intent of getting a cool and refreshing drink…. and nothing was going to distract them.  Josh said that a mature cougar need one deer a week to survive, and that these three cats likely were killing three to four deer each week.  Maybe less, depending on random hors-d’oeuvres in the form of poodles and fluffy cats fatally using their pet doors in the middle of the night.  After the one twin strolled to the right and stretched it came back as you can see, and then the mother caught sight of us and slowly went down into the creek bed.  Take a look at the second to the last photo to see how big her upper legs are compared to her twins (highlighted by the BLUE ARROW).  Her tail is also much beefier.  Once she got down to the sandy bottom she just plopped down and relaxed for another few minutes before all three of them slowly and silently went back into the desert. 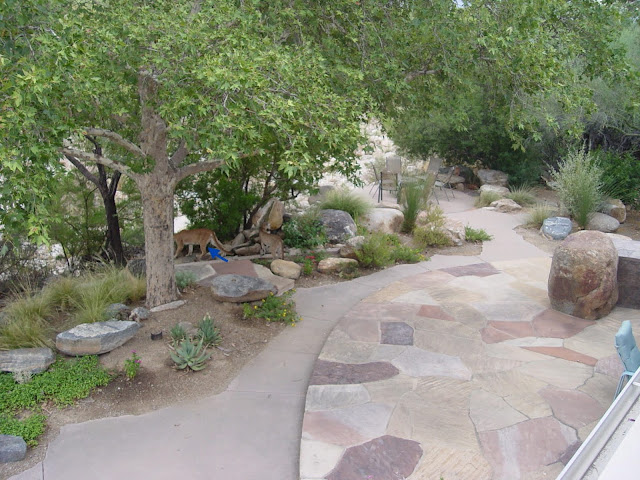 We’re having the grandkids over to spend the night this weekend.

We are not going to be camping out in the backyard.

At least until the creek starts flowing again after the monsoons.  Terry 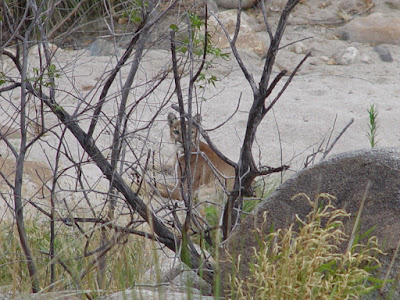 Amazing to have three big cats in your back yard, no? My friend Paul Parker lives in Santa Fe and shared the following shots of his recent backyard visitor, a large black bear. 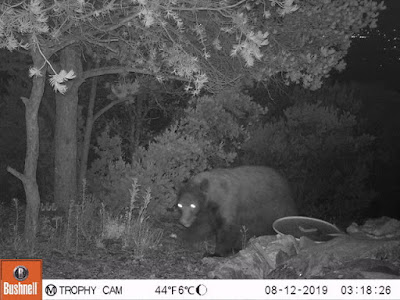 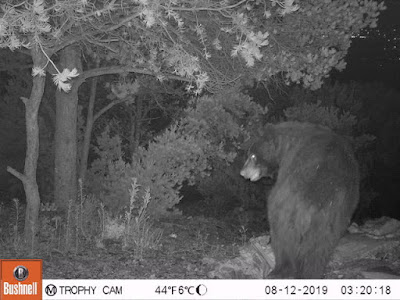 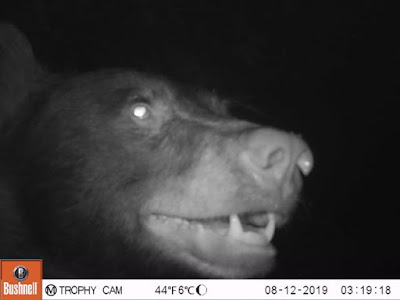 Kerry Olson showed me pictures of an even larger bear gingerly walking around her place in Santa Fe. I am going to text her and ask her to send them to me so that I can share them with you. She was worried that she had not locked her front door. The black bear had massive paws. I would have been freaked.

Here they are (she has even better ones): 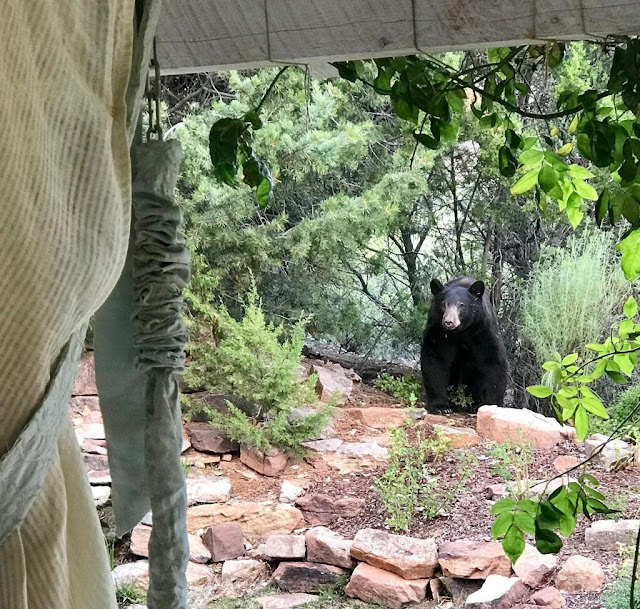 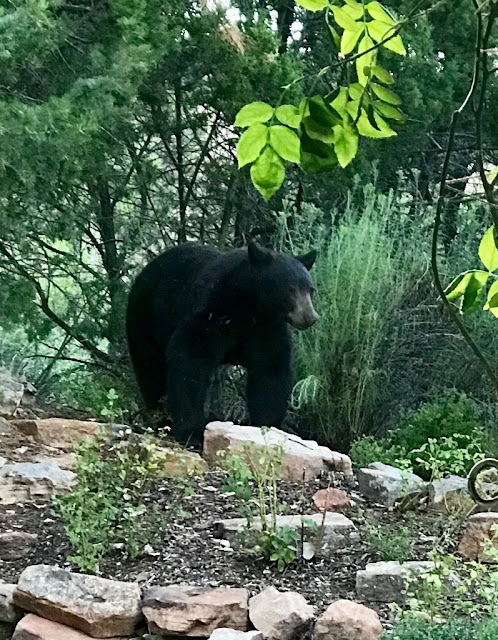 That is stinking cool!!!