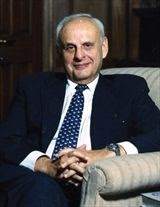 Leslie Gelb, one of the greatest and most widely respected National Security and political affairs writers of our time, has passed away.


Gelb was Executive Assistant for Senator Jacob Javits from 1966 to 1967. He was director of Policy Planning and Arms Control for International Security Affairs at the Department of Defense from 1967 to 1969, winning the Pentagon's highest award, the Distinguished Service Medal. Robert McNamara appointed Gelb as director of the project that produced the controversial Pentagon Papers on the Vietnam War. From 1969–1973, Gelb was a Senior Fellow at the Brookings Institution.He was diplomatic correspondent at The New York Times from 1973 to 1977.He served as an Assistant Secretary of State in the Carter Administration from 1977 to 1979, serving as director of the Bureau of Politico-Military Affairs and winning the Distinguished Honor Award, the highest award of the US State Department. In 1980 he co-authored The Irony of Vietnam which won the Woodrow Wilson Foundation Book Award in 1981. From 1980–1981, he was also a Senior Associate at the Carnegie Endowment for International Peace.He returned to the Times in 1981; from then until 1993, he was in turn its national security correspondent, deputy editorial page editor, editor of the op-edpage, and columnist. This period included his leading role on the Times team that won a Pulitzer Prize for Explanatory Journalism in 1986 for a six-part comprehensive series on the Star Wars Strategic Defense Initiative. In 1983, he worked as a producer on the ABC documentary The Crisis Game, which received an Emmy award in 1984. Gelb became President of the Council on Foreign Relations in 1993 and as of 2003 and until his death in 2019 was its President Emeritus.[8] From 2003-2015, he served as Board Senior Fellow there. In addition to his work at Council on Foreign Relations, Gelb was also a member of the International Institute for Strategic Studies and was a fellow of the American Academy of Arts and Sciences.