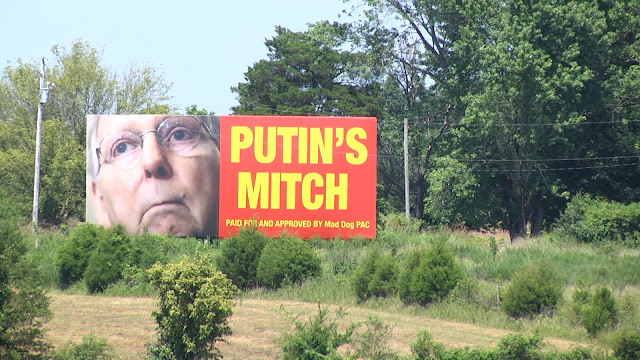 Poor Mitch McConnell. People are putting up some very funny billboards in his home state of Kentucky. I like it when libs take the gloves off. And he certainly has it coming.

Mitch's protestations notwithstanding, he did thwart bipartisan efforts to stop the Russians during the Obama administration.


The Obama White House, swayed by enormous amounts of evidence compiled by the U.S. intelligence agencies, asked for  bipartisan support to push back against Russian intrusion.
In mid-September 2016, Obama sent counterterrorism adviser Lisa Monaco, FBI Director Comey, Homeland Security Secretary Jeh Johnson to brief top members of Congress. He didn't want to appear partisan so he sought a “show of solidarity and bipartisan unity” against Russian meddling in our democracy.
But it didn't happen – because McConnell refused. He didn't want to go public and he questioned the validity of the intelligence. He finally agreed to a watered down version that didn't mention Russia.

And of course his former top aides have been lobbying for the Russians in order to build an aluminum plant in Kentucky.


Hunter Bates–McConnell’s former chief of staff–and Brendan Dunn, who advised the senator on policy issues such as taxes, trade, and financial services–and played a key role in Republican’s successful effort to pass tax-cuts–both filed lobbying disclosures last week confirming that they were working for Braidy Industries on the development of a new aluminum mill in McConnell’s home state of Kentucky, per Politico. Rusal reportedly has $200 million invested in the project.Braidy Industries, an Ashland, Kentucky based aluminum alloys manufacturer that creates products for the automobiles is 40-percent owned by the Russian aluminum behemoth Rusal. EN+ Group is the parent company of Rusal, and Deripaska no longer owns a majority stake.
To make matters worse, Rusal was only able to procure its stake in Braidy after the U.S. granted Deripaska sanctions relief in January, relief that McConnell advocated for. McConnell previously said that the push to lift sanctions was “completely unrelated to anything that might happen in my home state.” 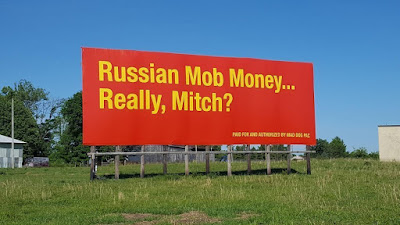 He has a very viable opponent for his Senate seat next year....her name is Amy McGrath... former military fighter pilot, mom of 3. Well spoken, smart ... I think she has a good chance to beat MM!

Where was that We're Rich and the 3rd billboards at? I remember seeing the 1st picture on I-65 North just right past the 2nd rest area.

I saw the Putin's Mitch billboard on I-65 North when I was coming home from Tennessee in July. Where's the "We're Rich" and "Russian Mob Money" billboards at?